Access insightful & curated financial content with Moneycontrol PRO at just Re. 1/- per day. Use code PRO365.
you are here: HomeNewsBusinessCompanies

With the Air India group now with the TATAs, Delhi will see Air India, Vistara, AirAsia India and Air India Express having a capacity share of 40.17 percent, about three percent more than IndiGo’s. It will become a two-legged race at Delhi with neck-to-neck departures.

As the first wave of COVID-19 subsided, the clear winner in air traffic were Tier II and III cities, which saw air traffic quickly bounce back to the pre-pandemic levels, and, in some cases, even exceed that.

This was on the back of a lower base, increased RCS-UDAN activity and larger cities seeing an exodus of people going to hometowns as work from home became the norm.

Soon, traffic to holiday destinations started picking up. However, as the second wave started, traffic was hit hard. Airlines and the government have been working together to see how air traffic can be brought back to the pre-pandemic levels at the earliest.

When air traffic does return to the pre-pandemic levels, traffic will again be driven by the metros, and not by Tier II and III cities. This is because of the sheer volume which the metro cities, especially Delhi, Mumbai and Bengaluru, get on the table as compared to any other city in the country.

With the Air India group now with the TATAs, the combined entity will have different dynamics in the market and it will be a four-cornered contest between IndiGo, TATA Group Airlines, SpiceJet and Go First.

While it will take a long time to integrate the four Air Operating Permits (AOPs) into either two or one, the close collaboration between the airlines is expected to start soon. An analysis done on the basis of the data shared by OAG shows that Delhi, the largest airport in the country, will be the capacity leader.

Delhi will see Air India, Vistara, AirAsia India and Air India Express have a capacity share of 40.17 percent, about three percent more than IndiGo’s. These are COVID times, and with the capacity cap in place, it may not be a true indicator of how things will pan out, but it will become a two-legged race at Delhi with neck-to-neck departures.

It will also mean that IndiGo will see strong competition for the first time, after it reached a domination stage. 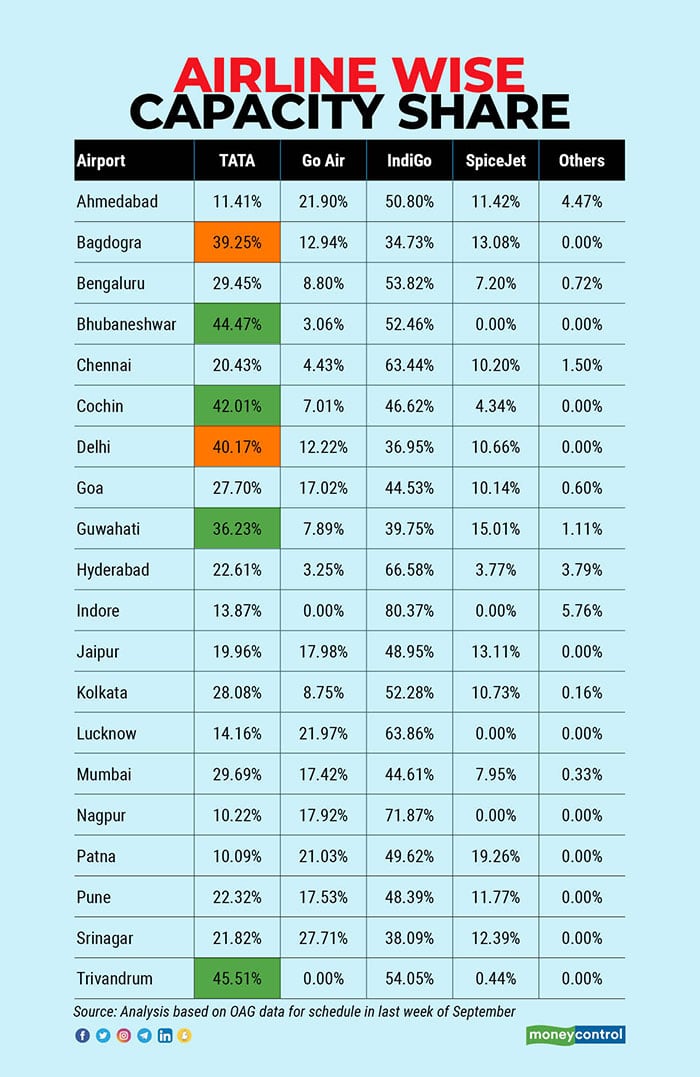 Likewise, Bagdogra will see the TATA group have more capacity than IndiGo. It is the eastern gateway to North Bengal and Sikkim.

Also Read: Storyboard | Who knew that Air India’s Maharajah was born on the corner of a letterhead?

Apart from these two, the Tata Group would be within 10 percent of the capacity of IndiGo at Thiruvananthapuram, Guwahati, Kochi and Bhubaneswar. For the first time, IndiGo will see dedicated strength in the form of competition. But the TATA group will have to be in close coordination, if they have to rule the market, starting with these cities where they are either in control or near it.

There is no competition to Delhi in the foreseeable future. By the time Navi Mumbai airport comes up, Delhi will see Jewar start operations, and, in addition to that, it will see the existing airport expand. With capacity increasing, and, in all likelihood, the airport continuing its policy of allotting a balanced portfolio of slots, it would mean that the Tata Group will continue to have a significant presence in Delhi and will help the airline corner a lot of traffic, feed international flights and continue building the Delhi hub.
Ameya Joshi runs the aviation analysis website Network Thoughts.
Tags: #Air India #Air India disinvestment #aviation #India Aviation #Tata Group
first published: Oct 8, 2021 04:22 pm