Q. What are patterns? How do you spot them?

A. A chart pattern is a visual representation of price movements. When data is plotted, a pattern naturally occurs and repeats over a period of time. In short, they are geometric shapes found in charts which help in making sense of price action.

Patterns are formed using trendlines. Trendlines are generally formed using significant highs and lows. Not everyone is able to spot a pattern right away, one needs to practice and draw / re-draw lots of trendlines until one gets a hang of it.

Some of the patterns are Triangles, Cup and Handle, Head and Shoulders, Flags etc.

Q. What is a triangular pattern? What does it indicate?

The lower line of a triangle is where the demand lies and the upper line of a triangle is where the supply lies. As the range narrows over a period and the distance between the upper and lower line converges, the stock price breaks out of the consolidation zone either on the upside or the downside indicating the future price movement of the stock.

There are 3 major types of triangle: Symmetrical, Ascending and Descending Triangle.

- A Symmetrical Triangle is formed when a stock is forming Lower Highs and Higher Lows simultaneously.

Volumes play an important role in a breakout from a triangle pattern.

The shapes are as shown below. Q. What is a rectangular pattern? What does it indicate?

A. A rectangle pattern is where the highs and lows formed in a trading range are parallel to one another. It is a continuation pattern where after a strong initial trend the stock trades in a range forming a rectangular shape pattern.

So basically, a rectangular pattern is just a pause in the trend or consolidation in a trend before it continues in the original direction of the primary trend 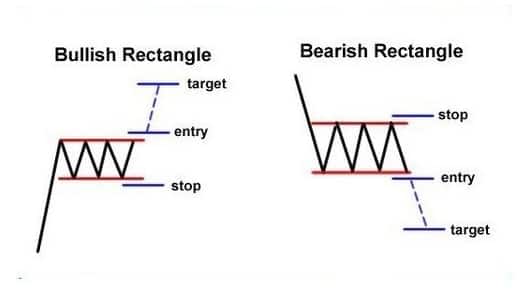 Q. What is a head and shoulder pattern? What does it indicate?

A. A head and shoulder is a pattern consisting of three peaks and a neckline. Name of the pattern is based on the visual representation of the pattern in the form of two shoulders and a head in between. It is a trend reversal patterns

The 2nd top represents the head and

The 3rd top represents the second shoulder of the pattern

It is a reversal chart pattern, where the 2nd top is higher than the 1st top but the 3rd top is lower than the 2nd top which shows deceleration of the trend which is likely to lead to a trend reversal when the neckline is broken. 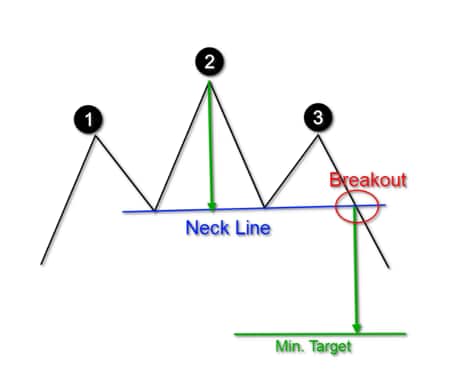 A. When a stock crosses a resistance zone, it is known as a breakout. A breakout indicates the potential for the price to trend on the upside. Generally, increasing volumes with a breakout is a good indication and analysts consider it as another confirmation.

Breakouts are subjective as the breakout levels are different for different people. Breakouts on long term charts are more effective than a short term time frame.

Q. What is a breakdown? What are the indicative signs of break down?

A. When a stock falls below the support zone it is known as a breakdown. A breakdown indicates the potential for the price to trend on the downside. Generally, increasing volume with a breakdown is a good indication and analysts consider it as another confirmation.

A breakdown signals traders to possibly get short or to sell long positions.

Similar to breakouts, breakdowns are also subjective as levels are different for different people