A cloud kitchen with 200 brands on Zomato and Swiggy. What's cooking?

The cloud kitchen business has grown rapidly in recent years, with the market size expected to be close to $3 billion by 2025. However, there needs to be greater oversight of the working conditions of these establishments.

On a bright Monday afternoon, we arrived at 7 Days Kitchen in Bengaluru's Marathahalli. At first glance, one may miss the nondescript cloud kitchen, with a bleached-out signboard.

The unit is one of many doors in a small corridor. A few steps in, we see a commercial kitchen set up in a space no larger than a bathroom in a regular apartment, and two men milling about — with none of the urgency you'd expect from an outlet listed on multiple food delivery apps.

The men we met live in other rooms down the same corridor where the kitchen is located.

This joint has become infamous in the past couple of weeks, thanks to Prashant Baid's blog, which revealed that nearly 200 different brands listed on aggregators like Swiggy and Zomato operated out of this hole. These brands all shared the same licence number and address. A cloud kitchen is an outlet that has the food delivered as it has no dine-in facilities (hence requiring much lesser investment). They are usually listed on food aggregators such as Swiggy and Zomato.

Thousands of orders have been parcelled from this dingy, dark room with no proper facilities and questionable hygiene. While its customers may not realise that these 200 restaurants are essentially all one and the same, a cursory glance through the numerous listings has one thing in common: unsatisfactory reviews. 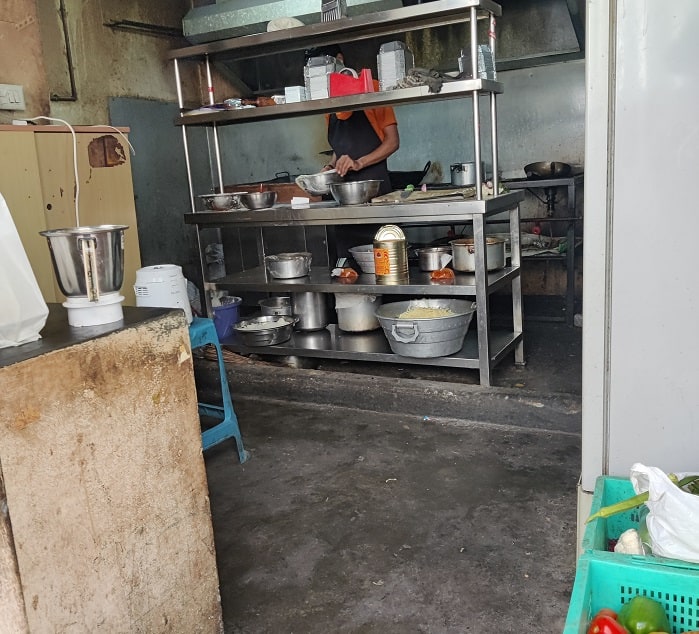 It should be noted that the Food Safety and Standards Authority of India (FSSAI), which grants licences to cloud kitchens, does not place a restriction on the number of brands that can operate out of the same premises.

After the blog brought the kitchen to public attention, the FSSAI paid a visit. On the day we visited the kitchen, the men told us it had been about ten days since they had stopped operations.

FSSAI designated officer Ravindranath, who had visited the kitchen in Marathahalli, confirmed this. He said that the restaurant had got a memo from the food safety officer, and that the owner had promised that he would adhere to the standards going forward.

Ravindranath stated that FSSAI will be keeping an eye on the kitchen, and if there are any complaints, the area food safety officer will take action.

In response to written queries, the FSSAI stated that a registered entity “can supply its product to innumerable brands as long as it complies with the norms of FSSAI.”

“FSSAI is committed to taking action against any reported food safety issue irrespective of the number of brands managed / operated / owned by the food business operator,” the authority said.

Getting an FSSAI licence for a cloud kitchen takes about a month and costs about Rs 2,000. According to agents who help procure these licences, FSSAI typically conducts checks once a year. Apps like Swiggy and Zomato do not conduct any checks.

Sources in the apps also verified this, stating that checks are only carried out when a complaint is flagged or parameters are not met (such as consistently low ratings).

Requests to Swiggy and Zomato went unanswered up until the time this article was published; if they do respond, this story will be updated.

The man in the spot

The licence for the Marathahalli kitchen is in the name of Ramjani Khan, the establishment's owner. Khan also owns another 7 Days restaurant in Electronic City, which is 25 kilometres away and has numerous listings on aggregator apps. On Google, the Electronic City outlet has 750 reviews with varying feedback. This restaurant with just a few tables was open when we visited. Three orders came via delivery apps during the roughly 30 minutes we were there. One other table was occupied. But these were not orders for 7 Days. One was for a listing called 'Smokeing Tandoor' on Zomato.

Khan was not present at either location. When we called, he was combative at first, then reticent, and then he told us how he got here.

“We started our kitchens during the lockdowns, when people could not find food. Back then, no one said anything. But now everyone seems to have a problem. We are not cheating anyone. It is not as I took the money but did not deliver,” Khan said, defending his decision to operate multiple brands.

These restaurants are his only source of income.

The negative publicity that came with the blog changed things for him overnight.

He confirmed that the FSSAI had inspected his Marathahalli kitchen and added that Swiggy and Zomato had dropped some of his brands.

“We are not breaking any FSSAI rules. We have not closed our kitchen just because someone tweeted. And if Swiggy, Zomato had not approved, we would not have been in business. We didn’t sell directly, but via their platform,” he said.

Khan said he was aware that Swiggy had spoken with the FSSAI about the issue. “They only control which brands are open or closed on their app. Swiggy and Zomato have not discussed it with me yet.”

According to a source at Swiggy, checks were made at the cloud kitchen, and the majority of listings were disabled.

It's interesting to note that many of the hundreds of brands he created for his two kitchens have names that are strikingly similar to those of well-known restaurant chains.

Asked why he chose to piggyback on established brands, Khan became defensive: “There is both Kwality and Quality. Doing this is not copying or cheating.” The need for multiple brands

It is not unusual for three to four listings to operate from the same cloud kitchen with a single licence.

“It is difficult to make significant revenues out of one new brand, because it takes time to build a brand name. If a new brand is generating revenues of Rs 5 lakhs off one brand, he or she can get additional revenues by adding more digital brands from the same kitchen. That is the essence of a cloud kitchen. It allows you to increase per sq.ft revenue or per employee revenue by operating multiple brands or cuisines with different price points and different positioning,” said Animesh Lodha, owner of Mumbai-based restaurant Cheeliza.

Some of Khan's kitchens are rated between 3.5-3.8 on the aggregator apps, whereas many do not have any rating at all.

According to industry experts, an average rating of less than 4.0 means 20-30 percent lower order volume.

“Biryani By Kilo is just one brand, but clocks Rs 200 crore in revenues. When you have 20-30 brands, the quality tends to drop. Lot of them also keep deleting and adding new brand names,” said Eshwar K. Vikas, co-founder of Bengaluru-based Mukunda Foods,  a kitchen automation firm that works with a number of cloud kitchens.

However, with such a large number of listings a smaller brand is able to garner more eyeballs.

A cloud kitchen’s location plays an important role in the size of its business. According to experts, Bengaluru has 15 micro markets, including HSR, Indiranagar, and Koramangla. The average order value fluctuates depending on the location, and each location has its own monthly order count.

Indiranagar, for example, has a much higher average order value than Electronic City. According to a person who tracks the space, HSR Layout typically receives close to 15 lakh orders on Swiggy per month, which is higher than areas such as Marathahalli or Electronic City.

According to experts, bachelors tend to order in more compared to families. This impacts the size of business in areas such as Indiranagar and Koramangala, where many bachelors reside.

Khan is still perplexed as to why a blog about his kitchens took such an unexpected turn. However, he is determined to be in business.