With the V8 headed for the gallows, is the last of the big-hearted E63 AMGs also the greatest?

It’s difficult not to feel a tad melancholy while looking into the horizon, ahead of the Mercedes-AMG E63 S’s bulging bonnet. Everything about this car is designed to invigorate, and instantly remind you why cars have continued to remain powered by liquified dinosaurs for over a century. And yet, the passage of time has ensured that even the glorious twin-turbo V8 AMG is officially an endangered species. Before the tide of regulatory changes engulfs this biblically powerful beast, the facelifted Mercedes-AMG E63 S warrants close inspection.

The E63 S has never been lacking in the looks department. It’s visual flamboyance does seem a tad restrained with the new set of peepers, and a redesigned front, but restraint is a welcome quality in this era of oversized grilles and it’s not like anyone is likely to mistake the E for anything other than what it is – a range-topping, roided-out iteration of the otherwise tweedy E-Class. A properly contrasting alter-ego in a way that the technically brilliant M5 isn’t. 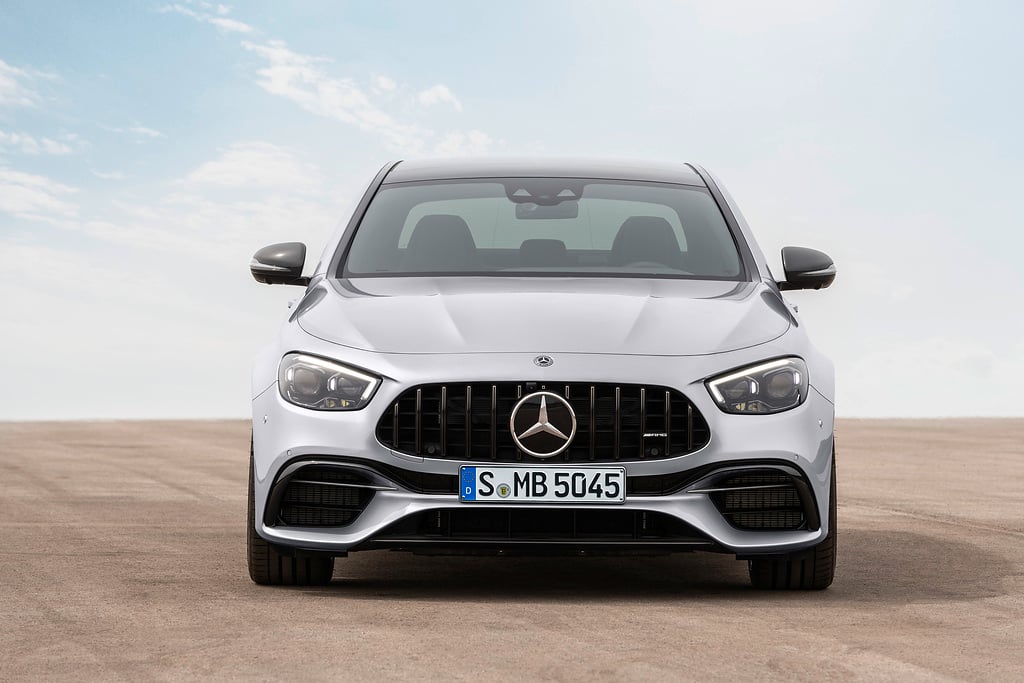 The redesigned front of the E63 S shows restraint, a welcome quality in this era of oversized grilles.

Power. Lots of it.

Underneath that sculpted hood lies one of the most powerful engines on a production AMG. More powerful even than the hierarchy-topping AMG GT-R, making 604bhp from its four-litre, twin-turbo V8. Torque levels remain identical to the last one at 850Nm and go a long way in justifying how something so big can go so fast. Because it does inspire incredulity every time you mash the throttle. There’s a constant sense of “how can it possibly be this quick?” Every time you glance at the heads-up display that enters triple-digit territory in the blink of an eye. It’s got all-wheel drive but power levels can go directly to the rear-wheel, thanks to the way 4Matic operates. And the manner it operates in, is sublime. It’s a reassuringly reliable ally, always offering traction when it's most needed, and backing-off when you want to have some fun (read: Drift Mode)

Acceleration is blisteringly quick, traction is unbelievably adhesive – the E63 AMG S is deserving of every adjective from the official book of supercar hyperbole. There are knobs on the steering which allow you to switch driving modes, with “Sport+” deepening its AMG growl, and further intensifying its pitbull-like tenacity. The suspension, which has been re-tuned for everyday driveability, immediately slips back into its preferred form, turning the E63 into a formidable track weapon (it’s even got a track mode which will calculate your lap times).

Putting the E63 through its paces on B-roads, mountain roads and the highway is the ultimate exercise in driver indulgence, so quickly can the modes adjust to the mood of the driver. The well-weighted steering offers lots of feedback, but it's still brawny, white-knuckle linear speed that remains the E63’s trademark. Sure, it masks its weight quite well, especially around corners, but if it’s grin-inducing performance you want, mash the throttle on a closed road, and witness the magic of German muscle. 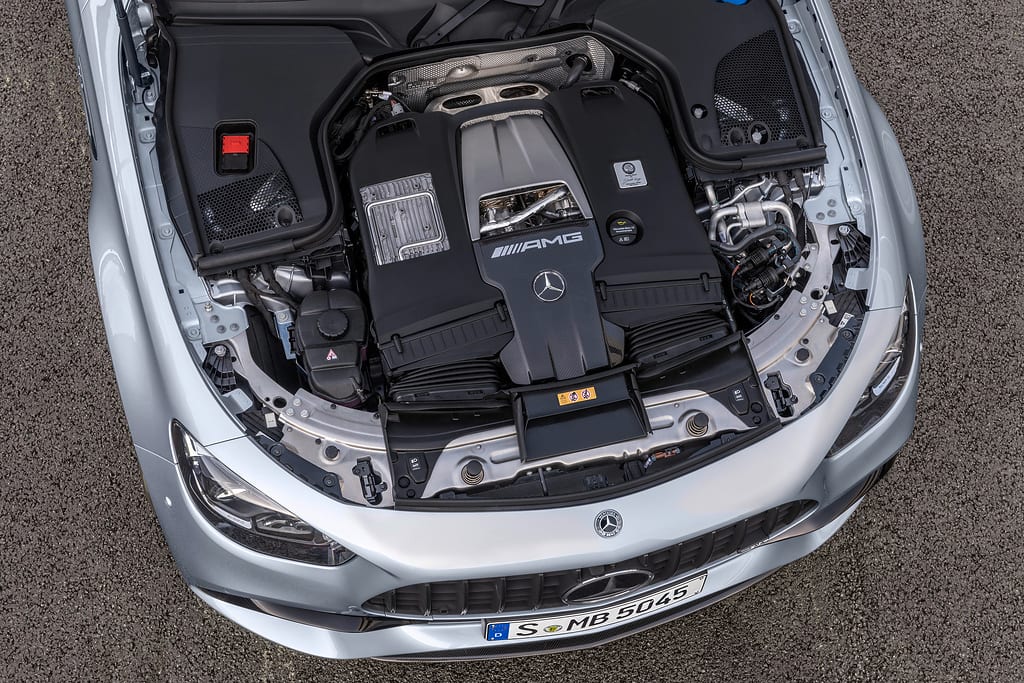 The 9-speed gearbox is now race-tuned and reacts accordingly. It’s got a wet clutch, and delivers boatloads of torque from the word-go, with the super saloon cutting through the air like a javelin. The turbo spool isn’t as imperceptible as you’d like it to be, but the heady dose of instant torque does flood you with adrenalin just the way you want it to, thanks to the gearbox being noticeably quicker on the uptake.

Seldom have steering designs played such a role in adding to the car’s character. The new steering wheel looks absolutely smashing, with two horizontal spokes on either side housing all the multimedia functions, alcantara draped thumb grooves. 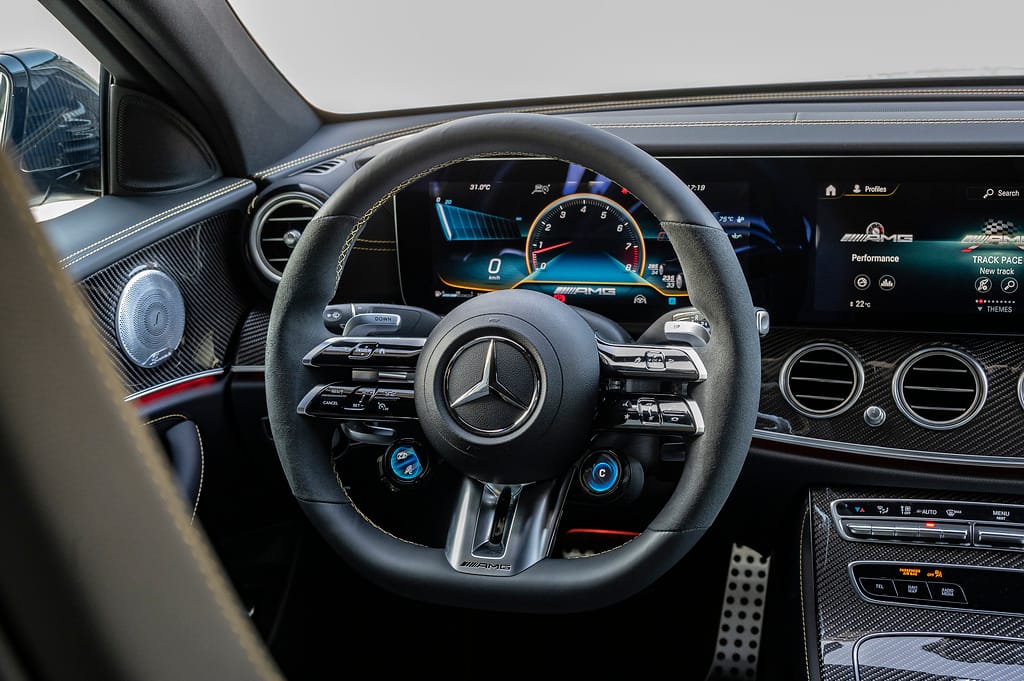 Two horizontal spokes on either side of the steering house all the multimedia functions.

Then there’s the new, updated MBUX system with the “Hey Mercedes” feature.

But the best feature, by a mile, are the driver and front passenger seats which now feature inflatable bolsters that always hold you in place, often better than a standard, race-spec bucket seat. The seats know just how to support your frame, while offering the comfort (and massages) offered by an S-Class.

Despite having highly addictive propulsive powers, the most endearing thing about the E63, indeed all cars wearing the AMG badge, is an almost child-like exuberance. There’s a sense of theatricality and eagerness to perform galaxy-conquering stuff. Its pulp hero quality immediately speaks to the 9-year-old in us, and reminds us why we love cars so much.

It’s the car that’s goading you to sneak out at midnight, step into a brawl for a friend; it’s brash and it’s all-heart. Often, this aspect has come with an affliction commonly called AMG-itis, an inability to acknowledge the limitations of the surroundings, thereby making the car a tad impractical.

This has primarily reflected in the ride quality of AMGs of the past, which has been quick to read the topography of the road and transmit it to the driver’s spine with much eagerness. It’s that precise attribute that Mercedes-Benz has fixed with the updated E.

It’s a lot easier to live with, and yet, Merc has been careful not to dilute the AMG-ness. Driving this E63 continues to be as visceral an experience as it has been before. It still darts forward with the same prehistoric-yawp, and the surroundings still pass-by with the sort of speed that makes driving this seem like a frenzied dream sequence. But the vibrations and the stiffness have been damped enough to broaden its usability. It’s no longer a supercar trying its best to be a super saloon. It can embody both roles with equal aplomb. At Rs 1.7 crore (ex-showroom) it’s a lot of car for a lot of money. There’s no aspect of driving that this Bahn-stormer does in a slapdash manner. The new E63 finally irons out the creases on the old one, in a fairly thorough manner. The 2021 Mercedes-AMG E63 S isn’t just one of the greatest super saloons. With its new-found maturity, and plushness, it might just be the greatest of them all.
Parth Charan is a Mumbai-based writer who’s written extensively on cars for over seven years.
Tags: #Auto Review #Car review #Mercedes-AMG E63 S #Mercedes-AMG E63 S review #Mercedes-Benz
first published: Aug 31, 2021 04:56 pm