Defunct icons have been revived in order to cash in on their brand appeal and nostalgia for the good old days.

Kshitij Iyer, a stills and motion films production manager residing in Mumbai, wanted to buy an adventure touring bike for long-distance as well as short-distance rides. After shortlisting the Royal Enfield Himalayan and a host of other bikes in that category, he eventually bought the Yezdi Adventure in March for Rs. 2.55 lakh (on-road price). His primary motivation: the bike took him back to the era when he was a toddler watching his father rule the road with his Yezdi Roadking, a 250cc beauty with a distinctive fuel tank and an unforgettable roar.

It was a time when big Bullets, Jawas and Yezdis were pretty much the only bikes on the road, with the odd Rajdoot and the powerful Rajdoot Yamaha RD350. The advent of the Japanese 100 cc bikes (Ind Suzuki, Hero Honda, Kawasaki Bajaj and Yamaha RX), launched through joint ventures with Indian companies in the early 80s, wiped out Yezdi/Jawa and Rajdoot and almost threatened the Bullet’s existence.

“My dad used to ride a Yezdi Roadking in the mid-80s. So, I thought of continuing the legacy. Also, I wanted an adventure bike that had a robust suspension to tackle potholes without making the ride cumbersome,” says Iyer.

Yezdi isn't the only iconic brand that is making a comeback in India. Auto companies are reviving defunct icons such as Jawa (forerunner to the Yezdi, originally from the erstwhile Czechoslovakia), BSA, MG, Luna, Contessa, Jeep, Vespa, Chetak and LML, in order to cash in on nostalgia for the good old days. 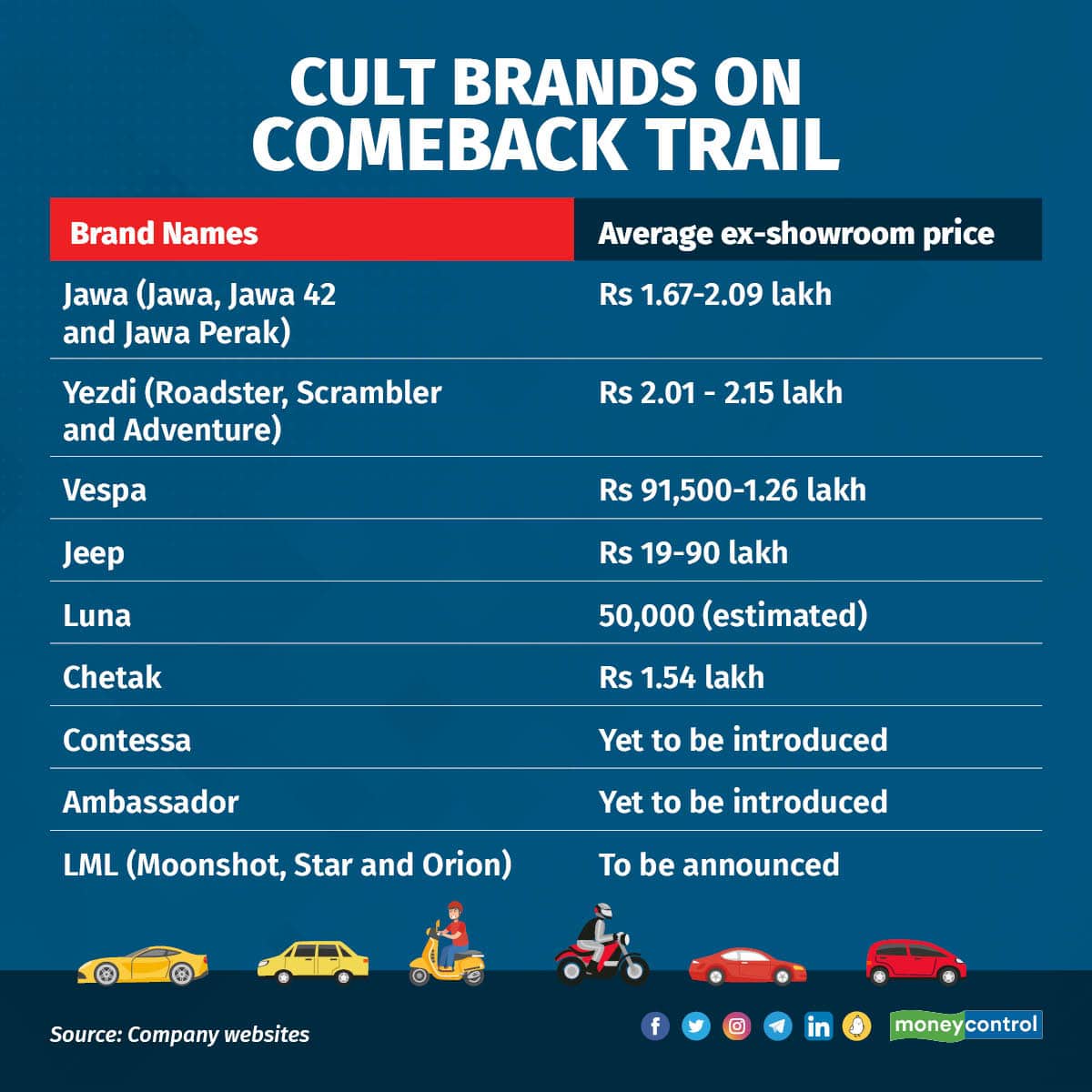 A slice of the past

So why are companies reviving brands that were historic? Avik Chattopadhyay, founder of brand consultancy firm Expereal and an auto industry expert, says, “Brands are revived for two reasons. First, if there is a latent demand for the discontinued or old brand. Second, if there is a new demand for the brand's proposition in the marketplace.”

“The legacy helps as the older generation does add positive word of mouth. In the case of Jawa, Yezdi, the attempt is to revive them as 'retro' brands, hopefully riding on their previous innings in the market to attract customers who still have associations with the old days.”

As Ashish Singh Joshi, CEO, Jawa Yezdi Motorcycles puts it, “The thought behind the revival of the Jawa and Yezdi brands in India was driven purely by emotion. To date, we have delighted thousands of Jawa and Yezdi lovers who are now creating their own stories backed by the legacy of the brands." Jawa and its successor Yezdi have been revived by the Mahindra-owned Classic Legends, which also brought in BSA.

Another two-wheeler that is making a comeback is the humble Luna moped, which is being relaunched by Kinetic Green as an EV.

“Since the new product will be carrying forward the legendary values of Luna’s simplicity, affordability and convenience in a completely new format, it will be very relevant and contemporary and will be well accepted by people,” said Sulajja Firodia Motwani, Kinetic Green chief executive. “We hope this will be a high-selling product and will sell 10,000-15,000 vehicles per month in 12-15 months from its launch.”

Bajaj Auto, too, has brought back its iconic Chetak scooter in a new electric avatar, nearly 14 years after the petrol version ceased production. The erstwhile Chetak scooter (petrol engine) was a household name for the Indian middle-class for over two decades from the early 70s. It is now being repositioned as a retro-modern blend. At Rs 1.49 lakh (ex-showroom Delhi), the e-Chetak is priced higher than even Hero MotoCorp's recently launched Vida V1 Plus and V1 Pro e-scooters.

“When we were planning to enter the electric vehicles category in 2018-19, we felt reviving the Chetak brand would be a great idea to leverage this equity in people’s minds,” said a Bajaj Auto spokesperson. On charging a premium over other players, the spokesperson said, “Our sales in the first five months of FY2023 have been 12,023 units — plus a healthy order book of about 15,000 units. More importantly, we believe we have established a differentiated position of 'premiumness' with reliable performance.”

Piaggio declined comment for this story. While unveiling the Vespa 75th Edition last year, Sudhanshu Agrawal, Business head – 2W, Piaggio India, had said, “Vespa is not just a vehicle but an icon of lifestyle that has gained global stature and transcended trends into various times.”

Lohia Machines or LML is also slated for a comeback with a new line of electric two-wheelers by the Yogesh Bhatia-owned S.G. Corporate Mobility Pvt Ltd. The Group is also bringing back the 'Contessa' car brand.

“We purchased the ‘Contessa’ brand from Hindustan Motors Limited (HML) and have paid the Intellectual Property Rights (IPR) for using that name for our passenger cars. After launching three electric two-wheelers under the LML brand, we will start focussing on the ‘Contessa’ brand for our electric cars in the medium term, Bhatia told Moneycontrol. However, he didn’t reveal the amount paid for the IPR, citing an NDA signed with the original rights holder.

Incidentally, media reports had earlier suggested that the ‘Ambassador’ would make a comeback in a brand new avatar. Hind Motor Financial Corporation of India (HMFCI) and Peugeot are reportedly collaborating on the design and engine of the 'Amby' which will be launched in a new incarnation. A PSA Peugeot Citroen India spokesperson, when contacted, confirmed that it owns the ‘Ambassador’ brand but denied any plans to use it in the near term.

While Jeep (which was contract-manufactured by Mahindra in the 50s) was formally introduced as a brand by Stellantis India, other companies are also considering reviving the names of their bestselling models. For instance, Maruti Suzuki is speculated to be relaunching a new model under the ‘Maruti 800’ moniker. The company spokesperson, however, refused to offer any comments on this.

No guarantee of success

Globally, Volkswagen had revived the ‘Beetle’ brand, which, however, has now been discontinued. As Chattopadhyay puts it, “The reintroduction of a successful brand need not always work. The biggest example of a failure is the VW Beetle. The new avatar just did not take off as it did not connect with the new buyer.”

In March 2012, Nissan had announced that it would revive the Datsun marque as a low-cost car brand for use in Indonesia, Nepal, South Africa, India, and Russia. Within a decade, Nissan announced that it is shutting down the production of Datsun cars in India.

Brand experts reckon that even though nostalgia is a good starting point and a way to rekindle memories of the bygone era, there is no assurance that it can singlehandedly ring the sales register.

As Prathap Suthan, Managing Partner/Chief Creative Officer at BangInTheMiddle, puts it, “It is important to note that almost all legendary car models are from a time when there were few choices in the auto landscape and they dominated the market and buyer mindsets as monopolies. We may not have similar market contexts that would allow the creation of powerful models with gigantic equity.”

Only the original will do

Interestingly, there are some bike riders who swear allegiance to the erstwhile version of the Yezdi or Jawa branded products and still use them for joyrides. For Instance, Sandeep N. Ananthaprakash, who is currently doing a cross-country ride on an older Yezdi, used to have multiple generations of the Yezdi (79, 90, 95 and 96 models) and still uses all of them except the 79 edition, which he disposed of.

“I still ride the old Yezdi because of comfort, handling and ride quality,” said Ananthaprakash, who works for the tourism industry.

Similarly, Ramesh Kochar, a businessman based in Ooty, bought a second-hand Roadking (1994 model) and has no plans to buy the current Yezdi.

In his words, “The two-stroke engine Yezdi of yesteryear is incomparable to the four-stroke engine Yezdi of today. It scores over the current Yezdi because of unique features such as its magneto kickstart, interchangeable tyres, higher power output, ride quality, driving dynamics, affordable spare parts, stability, better road grip, etc.”

Note to readers: This article has been amended since it was first published to add the fact that Vespa exited the Indian market owing to changes in regulations and the company declined comment for this story.