Decoding the fundamentals of investment immigration 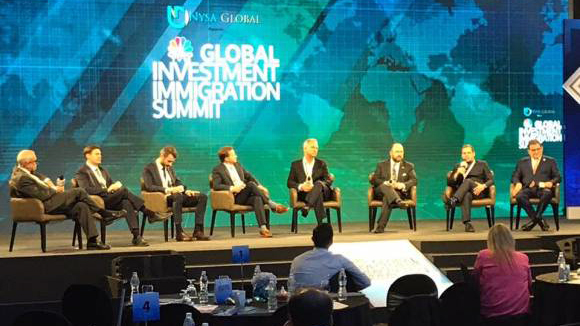 When people think of popular ways to immigrate to a country, some of the first and fastest that spring to mind are student visas, spouse visas and work permits. However, one method of acquiring residence that’s quickly garnering popularity is investment immigration, which requires wealth and job creation in a country as the path to acquiring permanent residence. Countries have offered these programs for years now, although they have gathered steam since more conventional options have been affected by geo-political uncertainty.

Investment immigration experts from Europe and North America charted the rise of this phenomenon, and what it means for Indian enterprises and individuals, at the CNBC-TV18 Global Investment Immigration Summit, presented by Nysa Global.

One of the programs that was up for discussion was the ever-popular EB-5, the golden visa offered by the USA. The immigration category facilitates residence for investors who put up USD 1 million, which is reduced to USD 500,000 when the investment is made in areas with high unemployment. The investment comes with certain caveats – the money must be proved to be legally earned or acquired, and invested directly. And while the process may seem fairly straightforward, it can be a lengthy one. As immigration attorney Bernard Wolfsdorf notes, “The waiting line is chronic, the window of opportunity is narrow.”

Another popular destination for investment-based immigration is the US’ neighbour, Canada, which offers the Quebec Immigrant Investor Program. Requiring a qualifying investment of CAD 1,200,000, the program provides permanent resident status to professionals with demonstrable business management experience.

Across the pond, “Europe’s doors are open,” noted Linda Sweeney, Senior Advisor at Nysa Global. Portugal, Spain, Greece, Ireland and UK have been especially popular with investors from across the globe. Immigration attorney Kelvin Tanner highlighted the plethora of options the UK had to offer investors, with offerings not only for large investors, but also start-up and innovator visas. Though applicants to these categories have to undergo additional scrutiny of their ventures being scalable, sustainable and innovative, the minimum investment threshold is nearly negligible compared to other countries and categories.

The UK’s neighbour, Ireland, also has a bouquet of options, such as a philanthropic donation, enterprise investment, REIT investment or an investment fund. While the processing time of around six months can be longer than the UK (which can be as little as 2-3 weeks), Ireland has a lower per annum requirement of just one day! It also houses operations from leading technology, financial services, gaming and pharmaceutical firms, and some of the finest educational institutions in the world, making it an increasingly attractive destination.

Ireland’s not the only European destination gathering steam when it comes to investment immigration, though. Sweeney noted that Portugal – which requires a minimum investment of EUR 500,000 for a resident permit – actually received more applications than the USA last year. Neighbouring Spain isn’t far behind, with a minimum threshold of EUR 500,000 through the acquisition of real estate. And while Greece has the same requirements as Portugal, the speakers noted that Malta and Cyprus offer the chance to actually buy a citizenship for a relatively higher amount.

All this makes it clear that with the right planning, and a little bit of patience, immigration investment can be a fast, attractive solution to your immigration woes. Just remember to do your own due diligence, or as ReDev Properties’ Darwin Forer put it, “Rule number one is never assume your friend’s information is correct, and rule number two is just remember rule number one!”