Digital romance scams have surged over the past two years, leading to millions of dollars in losses for people who were wooed and then duped out of money.

It’s an age-old tale: love gone wrong, a jilted partner left in the lurch. Only now, the story is colliding with the very modern phenomenon of online fraud.

Digital romance scams have surged over the past two years, leading to millions of dollars in losses for people who were wooed and then duped out of money. While con artists have long been a part of life on the internet, experts say the trend exploded as Covid-19 lockdowns created the perfect opportunity for swindlers seeking lonely targets. 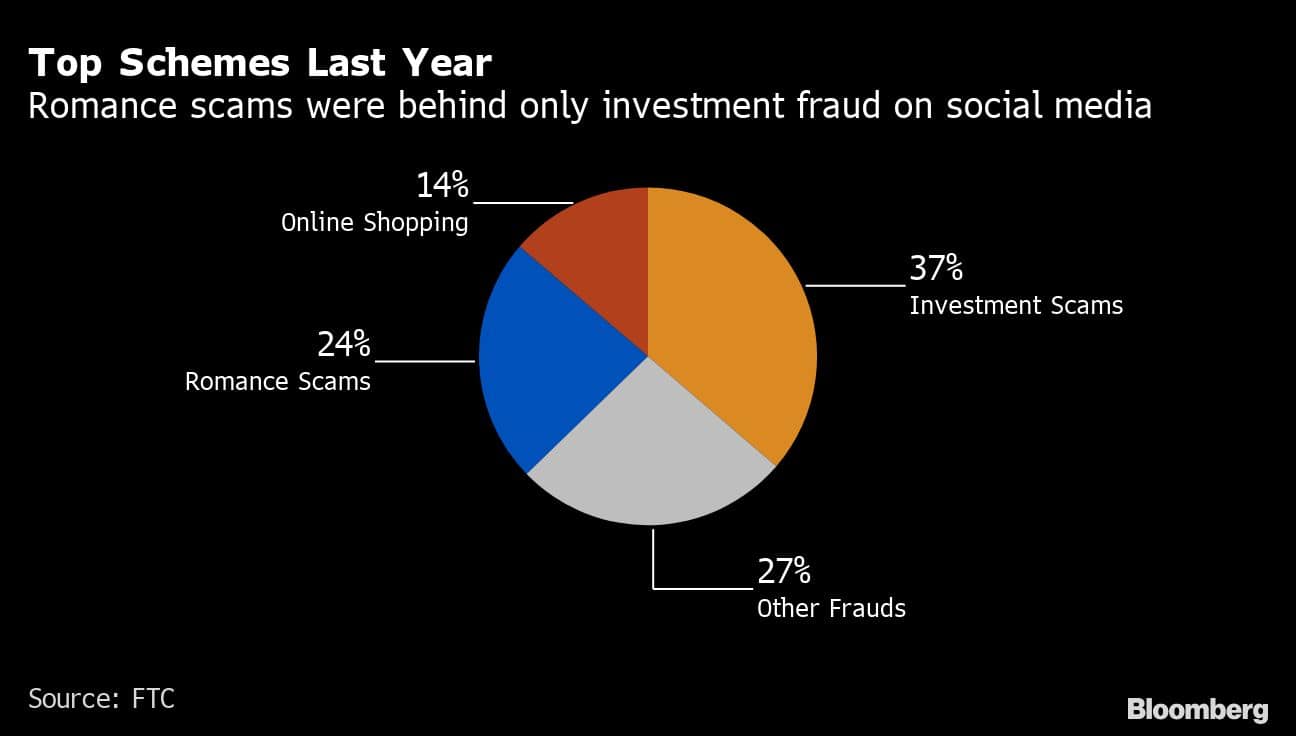 Now the world has opened back up, but some shifts in communication —  virtual chats and video meet-ups — have become entrenched in dating norms, opening a door for criminals. Banks and wealth-management firms are rushing to keep up.

“Romance scams are some of the largest losses I’ve seen over the past four years,” said Tara Ambrose, senior manager of vulnerable client initiatives at RBC Wealth Management, which saw a 40% increase in reported scams last year. “The isolation, uncertainty and anxiety in our world right now really made people more vulnerable.”

Social media is a particularly popular place for dating fraud, such as the one that played out on this year’s Netflix documentary “The Tinder Swindler,” which featured an alleged diamond mogul scamming women he met on Tinder into giving him “loans.”

More than 95,000 people in the US reported fraud initiated on social-media platforms in 2021, with losses totaling about $770 million, according to the Federal Trade Commission. That was more than double the year-earlier figure and up from just $105 million in 2019. Scams tied to romance were the second-most profitable on social media, after investment fraud, the agency’s data show. The horror stories abound. One RBC client lost more than $20,000 after becoming emotionally involved with a scammer on Match.com. In the firm’s biggest romance-scam case, a woman lost roughly $600,000 to a fraudster who told her he was arrested abroad and needed money to avoid life in prison or possible execution. To add insult to injury, since the victim had cashed out stocks to send the money, she had to pay $200,000 in capital-gains taxes, Ambrose said.

The client, who was in her 60s, thought that she had converted the person to Christianity and was saving their soul.

Recovering funds is very rare, Ambrose said. And while victims often are senior citizens or part of an older demographic, even those in their 20s and 30s who grew up with the Internet can fall for the scams.

“The younger crowd likes to think they are more tech savvy, but there are a huge amount of the younger crowd being victimized,” ​​said Kathy Waters, founder of Advocating Against Romance Scammers. “All of them say, ‘I never thought it could happen to me.’”

Rebecca Rosebrough, a 38-year-old home-care specialist in Palm Beach, Florida, lost about $24,000 after being scammed by a man she met on Facebook five years ago. He said he lived in the Washington, D.C., area for his job in the military, and they would FaceTime every day. She even started corresponding with his 10-year-old daughter.

The requests started out small — at first, he asked for $60 to buy protein powder, saying that since he was on a military base he couldn’t access any cash. Later on, he claimed he had a medical bill that he couldn’t pay and needed help.

Eventually, she grew fed up and said she wouldn’t send him any more money. He reacted with outrage.

“I was like, ‘you’ve conned me,’” she said. “He said, ‘you don’t even know my real name.’” She said she contacted the police but they told her that since she didn’t know his true identity, they couldn’t do anything.

Wealth managers such as RBC and Wells Fargo & Co. have created dedicated teams to focus on fraud aimed at vulnerable clients and are training more financial advisers to spot potential exploitation. They’ve tweaked computer models that try to get ahead of scams, bought third-party software to help spot fraud, and are asking more clients to name a trusted contact on accounts so that a firm can consult someone about suspicious transactions and not run afoul of privacy laws.

“Cybertools give fraudsters the ability to commit fraud at a speed and scale we’ve never seen before,” said Michael Steinbach, a former FBI special agent who is now the head of fraud prevention for Citi Global Consumer Bank.

He said that overall fraud increased during the pandemic, but much of the attention was centered on scams from the government’s stimulus programs.

“Now that the pandemic has subsided, or at least the stimulus aspect of it, a lot of people in the industry expected that fraud would come back with a vengeance,” he said. “And it has.”

The number of scams involving strangers doubled at Wells Fargo in the three years through 2021 and now make up about 20% of cases, with no sign of slowing down, according to Ronald Long, head of Wells Fargo’s Aging Client Services. A lot of scammers go on religious dating sites, like Christian Mingle or Jewish Mingle. Words With Friends is also a happy hunting ground, he said.

Ambrose of RBC said that the emotional manipulation by scammers goes deep enough where clients are often coached to not be truthful about what they were requesting the funds for. Often, it’s up to the advisers to spot red flags and break the news to clients that they are being scammed, especially if frequent requests for withdrawals don’t add up. Sometimes it can be difficult for victims to believe they’ve been conned.

“Romance scams can be devastating emotionally,” she said. “When you think about how people are isolated and lonely to begin with, it can be very traumatizing to recognize that you’ve been that victim.”

Marlene Graham, a 49-year-old teacher from Peoria, Arizona, said she has been targeted in multiple romance scams in the past few months alone. One of them said he was a military soldier based abroad, and she quickly fell “head over heels” for him.

He asked Graham to be the beneficiary of a deposit worth shy of a million dollars. Cautious, she emailed the bank and received replies that were riddled with grammatical errors, offered no contact information and a signature that simply read “management.” The exchanges convinced Graham that it was all a scam.

Another guy seemed promising, until a friend pointed out that his photo was the same as a person that had appeared on the Dr. Phil talk show, indicating it was likely a scammer who used a fake picture.

Then there was a third man who sent her his cryptocurrency portfolio and claimed that she would double her money if she followed his lead. He urged her to set up a joint partnership account. Graham blocked him.

“It makes me feel disheartened,” she said. “I’m trying to find my forever and now here I’ve been scammed or possibly scammed by three different guys. It’s like, is there any hope?”