UPCOMING EVENT:Special webinar on Highlights of global investing in 2021 and what lies ahead' at 2 pm on 21st January, 2022. Register Now!
you are here: HomeNewsWorld
The war-torn country's opium economy has blossomed, with three of the last four years recording the highest-ever poppy cultivation. Although Taliban have vowed to crack down on narcotics trade, experts suggest the promise could be only aimed at hoodwinking the international community.
Updated : September 12, 2021 / 09:17 AM IST

The United States' failure in Afghanistan, point out experts, is not only restricted to its retreat in the face of a marching Taliban. The 20-plus year intervention was also unsuccessful in dismantling the country's opium economy.

From air raids on drug-making labs to incentivising wheat cultivation, and deploying resources to break the local cartels, Washington ended up spending a massive $8.6 billion to throttle the opium trade, as estimated in a 2018 US Special Inspector General for Afghanistan (SIGAR) report.

The end result, however, is that far from being curtailed, poppy cultivation has grown manifold in the past two decades in the country.

The gum harvested from poppies is turned into heroin, which, despite being illegal, remains in high demand in Central Asia, Europe and the United States.

With the Taliban now back in power, is Afghanistan headed towards becoming the world's biggest armed narco-state?

That depends on an array of factors, including the country's economic condition, the continued dependence on opium trade, the intent of the Islamist group, the interest of stakeholders and pressure from the international community. Here is a closer look.

The war-torn country's opium economy has blossomed, with three of the last four years recording the highest-ever poppy cultivation.

Amid the raging COVID-19 pandemic, opium growth exceeded by 37 percent in 2020, as compared to the previous year.

From 163,000 hectares in 2019, it expanded to 224,000 hectares in the preceding year. The area overwhelmingly included the territories controlled by Taliban despite the presence of US-led NATO troops.

According to the UNODC, the opium economy in Afghanistan is estimated at $1.2 billion to $2.1 billion annually. This makes it the biggest constituent of the Afghan Gross Domestic Production (GDP), accounting for 6-11 percent of it.

In its Afghanistan Cannabis Survey conducted in 2010, the UNODC found that the country has become "the world’s biggest producer of hashish". From  2015 onwards, it was also reported that Afghanistan has been supplying crystal meth, produced using the native herb ephedra which is abundantly found in the region.

The illegal opiate supply is the country's "largest industry except for war", former US State Department adviser Barnett Rubin had said.

As per a recent UNODC report, the highest-ever opium production in Afghanistan was clocked in 2017, when 9,900 tons worth of opium, valued at around $1.4 billion, was estimated to have been sold. The revenue generated was roughly 7 percent of the annual GDP, the report said.

In the same year, if the value of local consumption of drugs along with export, and the imported precursor chemicals are taken into account, the estimated value of Afghanistan's illicit opiate economy expanded to $6.6 billion. 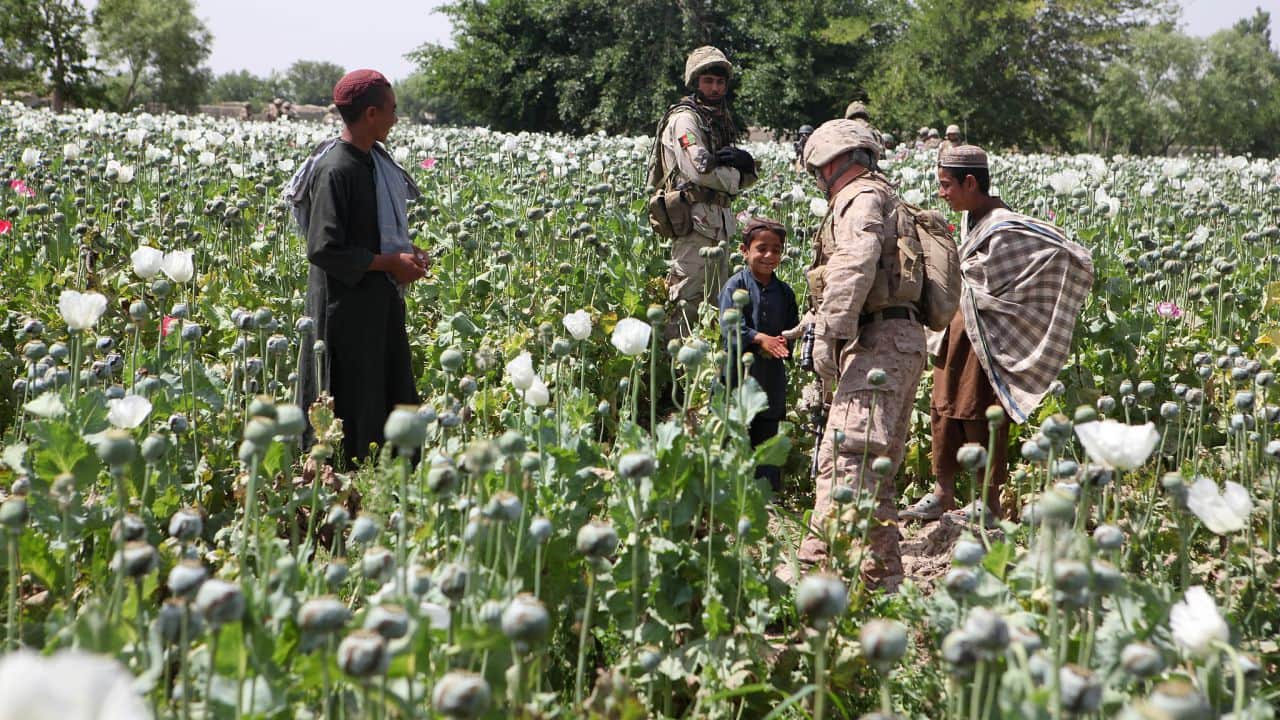 A 2011 photo of an International Security Force Assistance marine greeting children at a farmland in Helmand province, Afghanistan. Ironically, the war in Afghanistan had weakened irrigation and other systems that supported the opium trade. (Photo: US Marines via ISAFmedia via Wikimedia Commons)

Intoxicants including narcotic drugs are, notably, 'haraam' or forbidden in Islam. Yet, the Taliban which claim to fight in the name of religion has refrained from banning opium in areas under its jurisdiction.

This, apparently, is explained by the fact that opium not only sustains the Afghan economy but has also effectively addressed the Taliban's financial requirements during their prolonged war against the US-led forces.

The group derives up to 60 percent of its annual revenue from the illegal narcotics trade, according to an American official quoted in the US Special Inspector General for Afghanistan (SIGAR) report released in May 2021.

An investigation by the BBC found that the Taliban's annual income surged to $400 million from 2011 onwards, and is estimated to have peaked at $1.5 billion by 2018-end. If the SIGAR report is accurate, the Taliban may be drawing up to $800 billion in form of revenue from the narcotics trade.

The report also noted that the militant group imposed a 10 percent tax on farmers cultivating opium under its jurisdiction.

As per UN officials, the Taliban are expected to have earned more than $400 million between 2018 and 2019 from the drug trade, Reuters reported.

Some experts, however, do not agree with this data. David Mansfield, a leading researcher into Afghanistan's illicit drug trade, told the news agency that as per field studies, the most the Taliban can earn from illicit opiates is about $40 million annually.

On record, the Taliban have consistently maintained that they are not involved in the narcotics trade and take pride in the "opium ban" they imposed in the year 2000, shortly before their government collapsed. 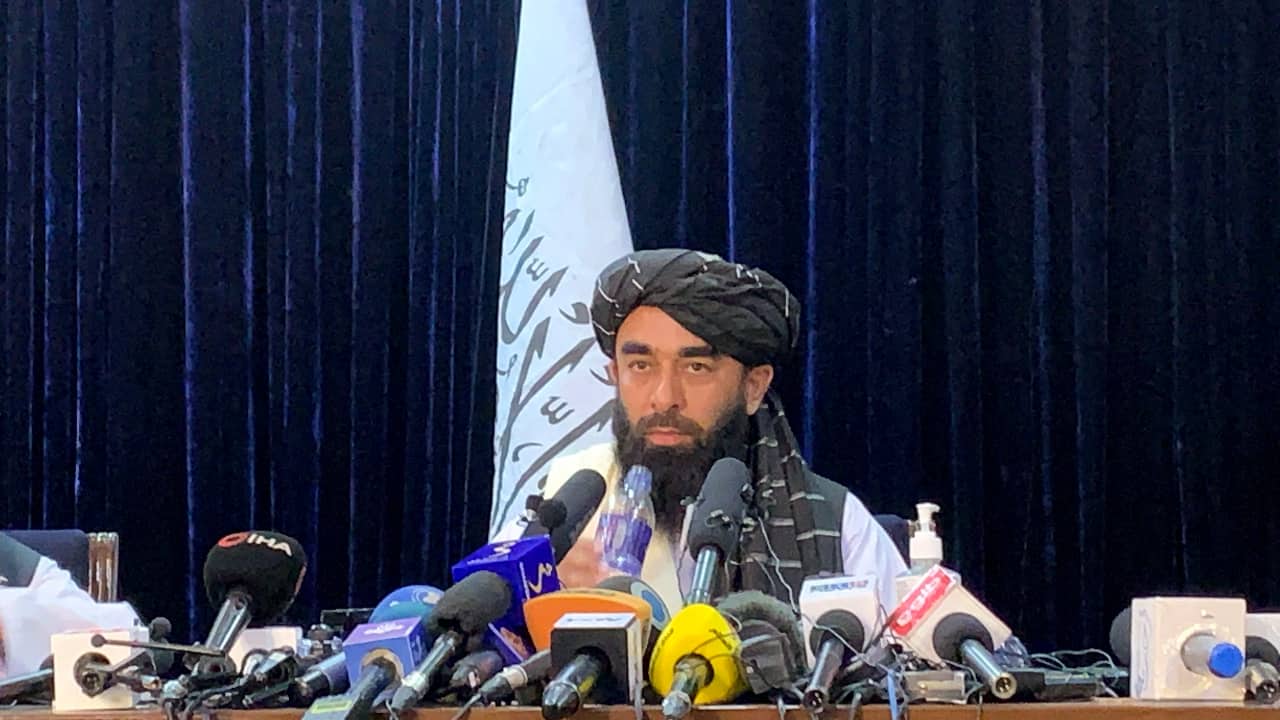 "We are assuring our countrymen and women and the international community, we will not have any narcotics produced," Taliban spokesman Zabihullah Mujahid said in a press conference on August 18. (AP Photo)

The primary factor that may prevent Afghanistan from sliding into a narco-state is the intent of stakeholders, suggest analysts, who also consider that any crackdown against the opium economy can yield success if it has the backing of all stakeholders involved.

"Millions of dollars have been invested by the international community and the UN. But in reality, very little has been done despite tall talks. In fact, the drug trade increased during these 20-odd years. So, who benefited from it? Is it only the West-backed consecutive Afghan governments or the stakeholders? The answer to this question is of course a hush-hush affair," Sourish Ghosh, an independent researcher and political commentator, told Moneycontrol.

Ghosh added that the Afghan economy is a donor economy, and China and Russia are now poised to play a major role with the exit of the US.

"Presumably, this time China will play a significant role in Afghanistan as they have already accepted the Taliban regime as a de jure government. Whether the Taliban will strictly put a ban on the opium trade depends on the stakeholders' interest. Central Asia and Russia both suffer tremendously due to the opium cultivation in Afghanistan," he said.

"So if the majority of stakeholders want the Taliban to go for the ban, they might go for it. But there is no surety in Afghanistan, things are always fluid and keep changing," the expert further noted. 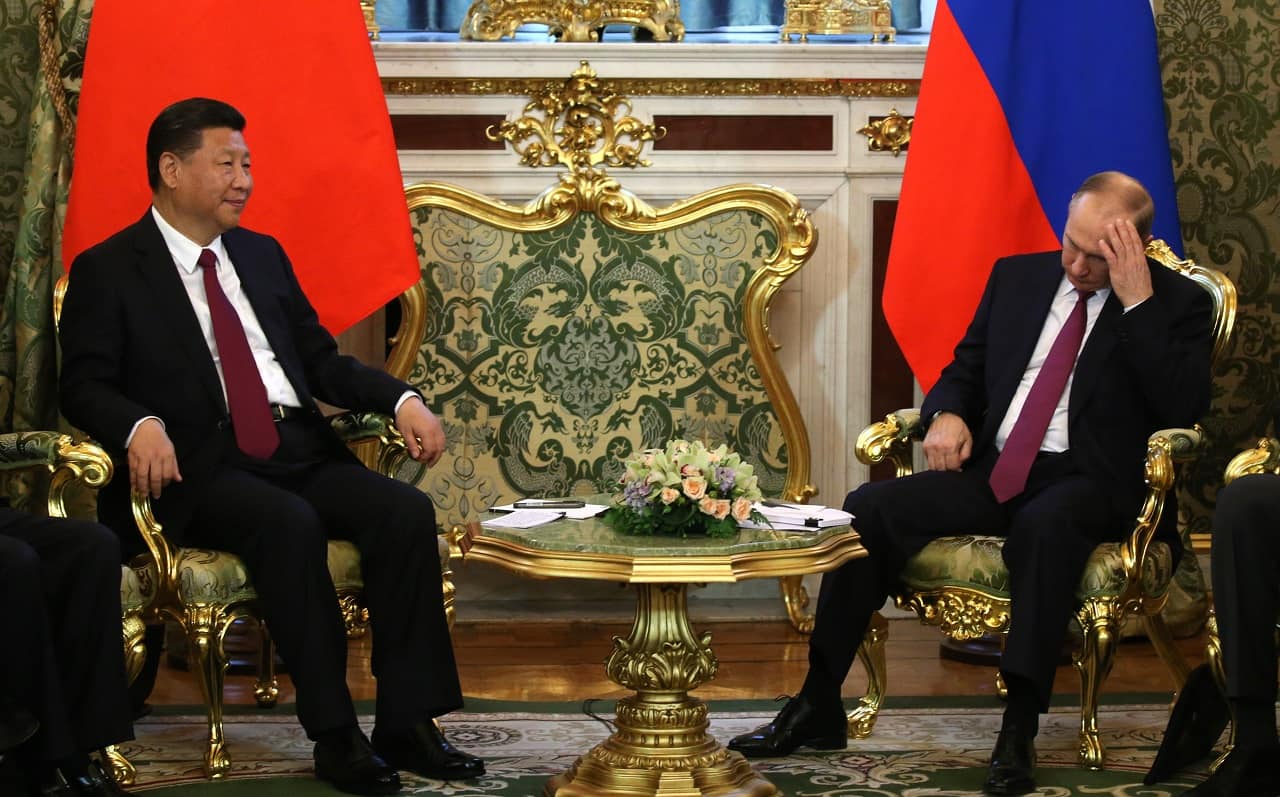 The Taliban's first tenure in power stretched from 1996 to 2001. Under international pressure, the group announced in 1997 that it would crush opium cultivation on religious grounds.

"The Islamic State of Afghanistan informs all compatriots that, as the use of heroin and hashish is not permitted in Islam, they are reminded once again that they should strictly refrain from growing, using, and trading in hashish and heroin," the Mullah Mohammed Omar-led government had said in a statement, adding that those violating the opium ban would be punished in accordance with the Shariah or Islamic law.

Despite the Taliban's claim, the area under poppy cultivation expanded from 2,250 metric tonnes in 1996 to 4,580 tonnes in 1999. This was attributed to the change in the Taliban's approach, as it later claimed that growing poppy was not a crime but using heroin and other drugs was banned.

In 2000, however, the Taliban moved towards enforcing a strict ban on opium cultivation.

Experts differ on the intent behind this move. While some consider it as a bid to gain international legitimacy, others saw it as a ploy to raise the opium prices which had then steeply collapsed.

Nonetheless, the ban was one of the most strictly enforced in Afghan history, as the area under poppy cultivation shrunk from 82,000 hectares to 8,000 hectares.

According to Brookings Institution scholar Vanda Felbab-Brown, the move backfired against the Taliban in several pockets of the country.

The ban ignited "a huge political storm against the Taliban and it was one reason why there were such dramatic defections after the US invasion," she told Reuters. 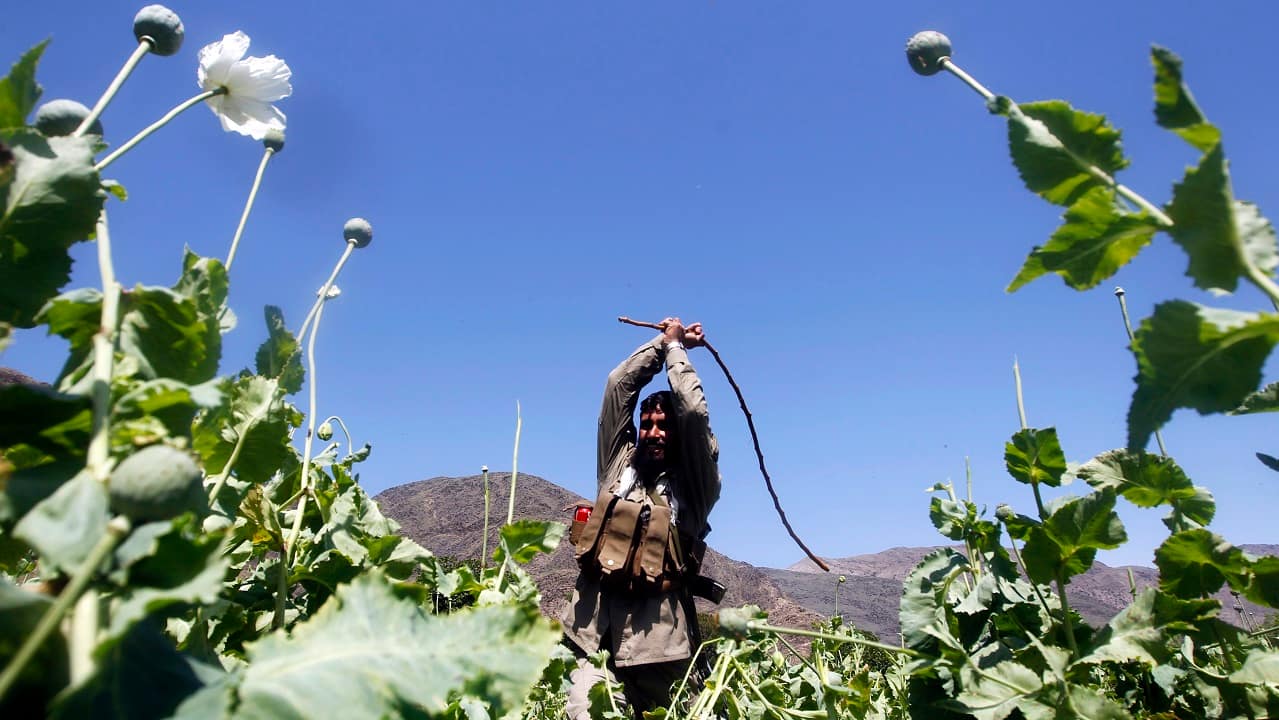 An Afghan policeman destroys poppies during a campaign against narcotics in Kunar province, April 29, 2014. (Image: Reuters/Parwiz)

Gretchen Peters, author of an authoritative work on the Taliban’s narcotics operations, noted that the Taliban continued to hold on to opium stockpiles, and used the production cut to raise prices.

"The kingpins formed an advisory council and persuaded the Taliban government to ban new poppy cultivation," Shannon wrote in the Wall Street Journal, adding, "Once the shortage set in and prices bounced back, they sold for fat profits, and the Taliban got its healthy cut." 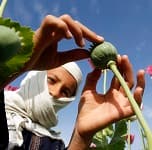 Will Taliban 2.0 tie up with global drug cartels?

The Taliban regime, despite maintaining on record that it would crackdown on the narcotics business, may establish or strengthen networks with global drug cartels in a bid to boost revenue from the illicit drug trade, suggest experts.

The Sinaloa Cartel of Mexico, which according to the US Drug Enforcement Administration (DEA) has a monopoly over the American heroin market, may end up aligning with the Taliban, suggests Mexican journalist and author Anabel Hernandez, as per a Deutsche Welle report.

Sinaloa Cartel is a potential business rival for the Taliban, "but the fact that the cartel and the Islamist group serve different markets means that they could actually complement each other", the report quoted Hernandez as saying. A drug addict smokes heroin inside a cave in Farah province, on February 4, 2015. (Image: Reuters/Omar Sobhani)

Ghosh pointed out while responding to Moneycontrol, that tie-ups among drug cartels already exist in the 'Golden Crescent' -- the term given to the illicit opium production market of Iran, Afghanistan and Pakistan.

"The Golden Crescent is already quite popular in the world as a drug hub. So, I'm sure the cartels are already operational there," he said, adding that the Western-backed Afghan governments adopted inaction to curtail the trade.

"The so-called democratic government had allowed the business to continue if not increase. So, the question is whether the Taliban officially allow the business or they put restrictions on it solely depends on how the economy shapes in the near future," Ghosh noted.