Half of new US entrepreneurs are women, leading a creation boom

A survey found that almost half of 2021’s new entrepreneurs were women, a significant uptick from 28% in 2019. And the share of new Black business owners tripled to 9%, according to Gusto, a payroll and human-resource management business.

Attendees sit on stage during the 2019 CERAWeek by IHS Markit conference in Houston, Texas, U.S., on Monday, March 11, 2019. The program provides comprehensive insight into the global and regional energy future by addressing key issues from markets and geopolitics to technology, project costs, energy and the environment, finance, operational excellence and cyber risks. Photographer: Aaron M. Sprecher/Bloomberg

Women and minorities have been fueling the boom in business creation of the past two years in the US.

A survey found that almost half of 2021’s new entrepreneurs were women, a significant uptick from 28% in 2019. And the share of new Black business owners tripled to 9%, according to Gusto, a payroll and human-resource management business.

The findings confirmed similar gains in separate research by web-hosting company GoDaddy Inc. Among the factors behind the surge in female entrepreneurship: child-care responsibilities. With schools and child-care centers still disrupted last year, a growing share of parents -- particularly women -- started their own business out of necessity.

In the Gusto survey, more than a quarter of female business owners with school-aged children said they created their company in response to increased child-care duties. 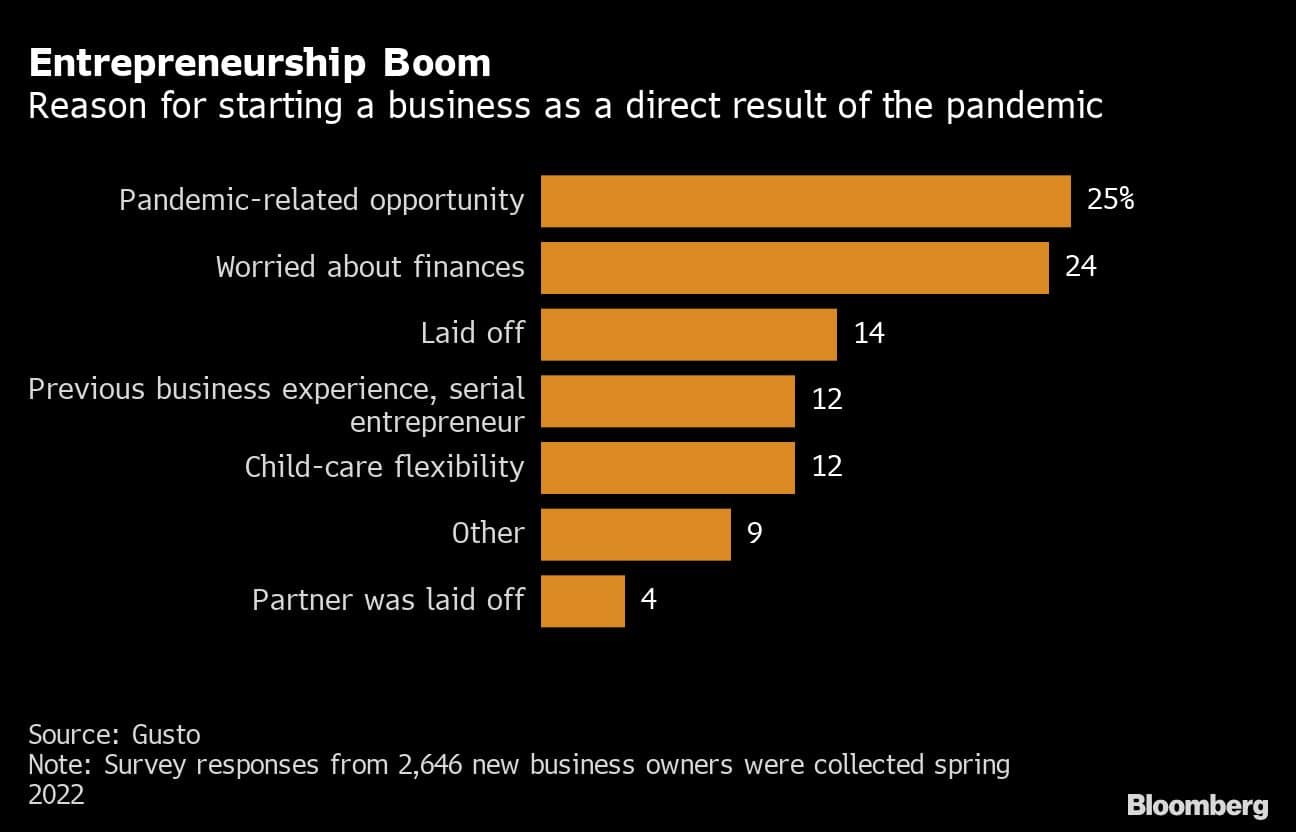 A record 5.4 million new businesses were formed in the US last year, according to the Census Bureau, showing that the burst of creation seen in the early months of the pandemic has legs.

While some of the Covid entrepreneurship was born of necessity in the early days after millions of workers lost their jobs, today’s business owners are more likely to be motivated by better opportunities.

Among Black respondents in the Gusto survey, more than one-third created a business to improve their financial stability -- a larger share than their White and Hispanics counterparts.

Overall, the study found that many workers are “placing a premium on the flexibility and autonomy afforded by self-employment, and they are quitting paid employment in favor of entrepreneurship.”

The types of businesses have changed as well compared with 2020. About half of new professional-service firms were started by owners who quit their job in the same industry, creating competition for their old firm.

To map out where entrepreneurs are, economists at UCLA Anderson Forecast developed an index of microbusiness activity using data from GoDaddy. At the top of the index was Santa Clara, California. Other highly ranked areas included counties that surround Washington, D.C., -- where new firms can feed off government contracts -- as well as Brooklyn and Manhattan in New York.

While business ownership can be a risky venture, especially in the midst of a pandemic, almost nine out of 10 respondents in the Gusto survey said their company has performed as expected or better than forecast. Still, more than one-in-five have taken on a side job to help cover operating costs.
Bloomberg
Tags: #boom #entrepreneurs #US #Women #World News
first published: Jun 23, 2022 10:27 am