China’s slowdown spills over to major economies through imports

A gantry crane loads a shipping container onto a haulage truck at the Behala inland port in Berlin, Germany, on Monday, Feb. 7, 2022. Global supply chains are nearing a turning point thats set to help determine whether logistics headwinds abate soon or keep restraining the global economy and prop up inflation well into 2022, according to several new barometers of the strains. Photographer: Liesa Johannssen-Koppitz/Bloomberg

China’s economic slowdown is spilling over to major exporting nations in Europe and East Asia through falling demand for manufactured goods, causing Germany and South Korea to post rare deficits with the world’s second-largest economy.

Elevated global commodity prices meant that China’s official import growth of 1% in June from a year earlier hid a worse result for manufactured goods. Imports of hi-tech products and mechanical and electrical goods fell about 8% last month, according to recently released Chinese customs data. There doesn’t seem to have been an improvement this month, with South Korea’s exports to China falling 2.5% in the first 20 days of July. The decline was mainly due to the lingering impact of lockdowns to prevent Covid-19 infections, which hit the confidence of consumers and business, according to Trinh Nguyen, Asian emerging markets economist at Natixis SA. “Countries that are directly exposed to Chinese domestic demand, especially [for] manufactured goods, are more vulnerable,” she said.

China’s role as driver of global commodity demand tends to overshadow the fact that the majority of its imports are manufactured products, both for its domestic market and for assembly into products which are then exported. Germany and South Korea, which have run trade surpluses with China for most of the last decade, both saw unusual deficits last month, according to Chinese and Korean data.

China’s slump “comes at a bad time for these economies as they also have a widening import bill while export demand has fallen sharply for their key customer,” Nguyen added. Worse for those countries, some of China’s slowdown in imports is structural. China’s electric vehicle exports have surged this year, and the EV supply chain is more China-centered, reducing demand for auto parts from countries like South Korea, said John Gong, a professor at the University of International Business and Economics in Beijing.

“I expect the pandemic winners Korea and Taiwan to have a really rough time as China, semiconductors, and the global goods cycle all turn negative,” said Rory Green, head of Asia research at TS Lombard.

Japan’s exports to China recovered in June from year-on-year declines in April and May, but the growth may be short-lived, said Craig Botham, chief China economist at Pantheon Macroeconomics. “Ordinary exports aimed at final demand have no hope given the dire situation Chinese consumers find themselves in, and intermediate goods are only useful as long as global export demand is strong -- as far as I can tell, it is fading,” he said.

Economists are lowering their expectations for the Chinese economy as the country’s coronavirus cases remain at elevated levels, suggesting more lockdowns are likely. A slump in the country’s real-estate sector has also deepened, compounding the issue. The median forecast for China’s GDP growth in 2022 fell to 3.9% in the latest Bloomberg survey.

With demand from Europe and the US still holding up and a rebound in port activity after Shanghai ended its lockdown, China posted its highest-ever monthly trade surplus of $98 billion in June. As a result of the weak outlook for Chinese demand, “odds are good that we get a record surplus for the full year,” Botham added. 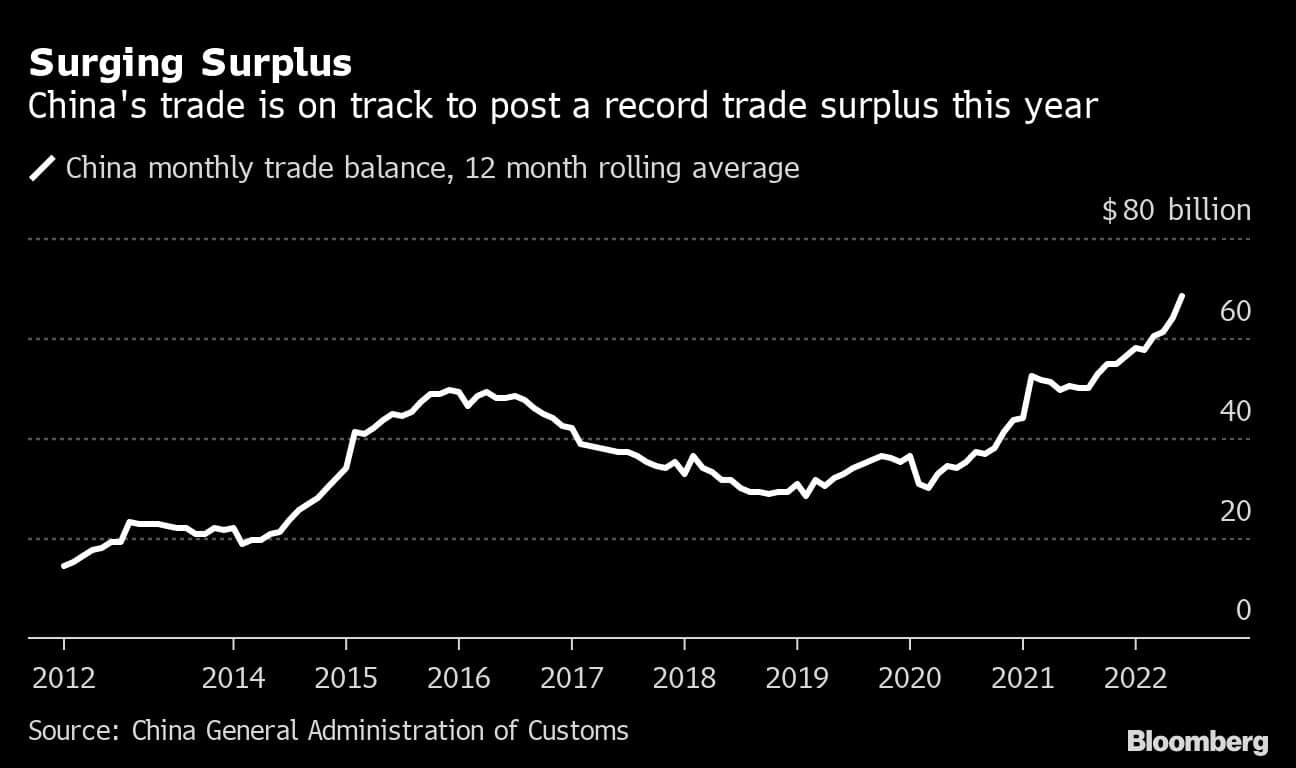 In a more optimistic scenario where China can avoid more strict lockdowns in the second half of the year, imports could recover to see annual growth of 7%-8%, said Le Xia, chief Asia economist at Banco Bilbao Vizcaya Argentaria SA in Hong Kong.

But that would be a sharp drop from more than 30% growth last year. “Weak imports will be the most important channel for China’s slowdown to spillover to the rest of the world,” he added.