The promise and paradoxes of democracy

Two new books throw light on the past, present, and perils of a democratic system of government.

What’s the matter with democracy? In 1814, John Adams, America’s second President, wrote that it “soon wastes, exhausts, and murders itself” because of human “vanity, pride, avarice or ambition”. Democracy has endured because of its flexibility, but the qualities that Adams highlighted are on full display during autocratic times. This has led to a shelf-load of books that interrogate the roles of cultures, institutions, and voter apathy. 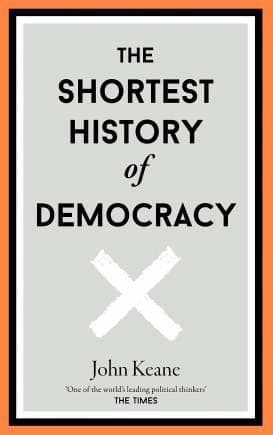 present perils. John Keane’s The Shortest History of Democracy is an exploration from its beginnings till today, and Zac Gershberg and Sean Illing’s The Paradox of Democracy spells out the contradictions of open communication.

Keane’s book is an impassioned, accessible tour of democracy’s greatest hits and misses, as well as a look at unjustly ignored B-sides. It’s more concise than his earlier The Life and Death of Democracy, showing how this “first-ever malleable form of government” evolved and why it’s about more than periodic elections.

The book also dismantles some long-held myths. Keane points out that democracy does not have its roots in Athens, as is often touted. Archaeological evidence indicates that the earliest public decision-making assemblies arose in Mesopotamia, the region corresponding to Syria, Iraq and Iran today.

It was transported to the Indian subcontinent around 1500 BCE, and only then did the system move west, to Phoenician settlements and the city-states of Greece. “Ex oriente lux: the lamp of assembly-based democracy was first lit in the East, not the West.”

The Athenian model was circumscribed, as were others that followed: adult male citizens were welcome to participate, but women and slaves were excluded. Not everyone was a fan. Plato remarked that it was a two-faced form of government, “according to whether the masses rule over the owners of property by force or by consent”.

Keane differentiates between three forms of democracy: assembly, electoral, and monitory. He writes that the second type arose with the birth of Church governance and then parliamentary assemblies in northern Spain.

Montesquieu summed the separation of powers in The Spirit of the Laws. The French political philosopher proclaimed: “The people, in whom the supreme power resides, ought to have the management of everything within their reach” but “that which exceeds their abilities must be conducted by their ministers”.

Electoral democracy was often plagued by populist outbursts such as those by Argentine caudillo Juan Manuel de Rosas. The other side of the coin – to use an example from the same continent – was the extensive welfare state reforms of the Uruguayan government of José Batlle y Ordóñez.

The edifice collapsed “on a sad and sorry note” during the first decades of the twentieth century. What followed was “the near-global destruction of representative democratic institutions by the bloody forces of war, revolution, dictatorship and totalitarian rule”.

Monitory democracy, the latest type, is distinguished by the growth of extra-parliamentary mechanisms to keep power in check. As Lin Yutang sarcastically remarked, politicians aren’t “benevolent rulers” who “love the people as their own sons”. Better, then, to treat them as “potential prison inmates” and devise ways “to prevent these potential convicts from robbing the people and selling the country”.

Such institutions helped to strengthen and deepen the system, but several challenges remained. Keane quotes Dr Ambedkar’s warning that unbridled capitalism would plague democracy with a “life of contradictions”. The struggle for government based on political equality would have to be conducted against a backdrop of social inequality. Neoliberal policies and cronyism have made such considerations more urgent.

There are also the deceptions of a digital age or, in PR pioneer Edward Bernays’ term, the “engineering of consent”. The outcome, as political theorist Pierre Rosanvallon has claimed, is that the centre of political gravity in today’s democracies has shifted from political parties, elections and parliaments toward oppressive executive rule. This is “elective despotism”, in Keane’s words.

For him, one of democracy’s paradoxes is a contrast between “the people”, in whose name leaders rule, and an actual populace of diverse backgrounds and interest groups. Sean Illing and Zac Gershberg, who define it as a

culture of open communication rather than a fixed model, say that the central paradox is that the freedom of expression critical to democracy can also be used against it.

Others have recognised this, too. Keane’s book quotes Hitler’s Reich Minister of Propaganda Joseph Goebbels, who said that “among the funniest jokes about democracy is that it gives its enemies the means to destroy it”.

In The Paradox of Democracy, Illing and Gershberg point out that new modes of communication enable propaganda that reshapes democratic politics. For them, this underpins other conditions such as institutional backsliding or material factors. The point is well taken, even though material factors shape and interact with technology and institutions in the first place.

The presiding deity of the book is mid-century communication theorist Marshall McLuhan. His insight, the authors write, was to show how media bias dictates ideology. As they put it: “Our ideology is our technology; our technology is our culture; and culture always precedes politics.”

In this view, the history of democracy is best told through the impact of new forms of communication. Sophist rhetoric swayed the Athenians; print disseminated revolutionary ideas in France and then Britain’s American colonies; radio and cinema were carriers of organised propaganda in Europe during the first decades of the last century; and TV news shows everywhere rewarded sensationalism and punditry.

Today’s social media platforms and algorithms make it easier to weaponise disinformation on a mass scale. They are now the daily arbiters of “which identities get activated, which voices are heard, and what citizens are willing to tolerate”.

The proclamation of a democratic government, then, is simply a starting point. The culture of liberal democracy only works “to the extent that norms like fair play and truthfulness are respected”.

As Jan-Werner Müller has written, dissent won’t magically disappear in such states. It needs to be managed and incorporated through an ongoing discussion between majority and minority, in parliament and beyond.

Illing and Gershberg’s hard-nosed assessment takes a cue from Carl Schmitt. You can pass the finest election laws, appoint an independent judiciary, and provide constitutional restraints, but “all of it sits on a razor’s edge: people and parties seek to win power in order to exercise power.” Democracies become illiberal, and checks and balances are toothless if the electorate doesn’t care or is too distracted to bother.

Where do we go from here? Illing and Gershberg have two suggestions. First, an educational system to help citizens guard against the onslaught of information. A curriculum that stresses participatory citizenship in which democracy is a culture, not simply a form of government.

Then, they call for a revival of local journalism. Following Tocqueville, they assert that focusing on issues that bring together people in neighbourhoods and specific areas is critical to restore trust and dialogue. After all, there’s less of a role for spectacle and demagoguery here.

The steps are admirable, but successfully putting them into practice will be challenging. After all, they face “a massive apparatus for defining, policing, and activating” organised identities promoted by political forces, to quote Ezra Klein.

Once again in its chequered history, the moment has arrived for citizens to believe in democracy as a guardian of plurality, as Keane says. In its best form, it is “the protector of different ways of living freed from the dictates of arrogant, violent and predatory power.”
Sanjay Sipahimalani is a Mumbai-based writer and reviewer.
Tags: #books #democracy
first published: Aug 13, 2022 08:40 am