"Like all physical processes that have to do with sex and childbirth, menstruation is considered a private activity and a public acknowledgement of the same is stigmatized."

"In a society plagued by menstrual stigma, period leave cannot be left up to individuals to seek when required."

'Right to Bleed at the Workplace' by Radhika Radhakrishnan

Paid menstrual leave (or period leave) gives a person the option to avail paid leave from their employer if they are unable to go to work during their menstrual cycle. A 2012 study found that 20 per cent of women experience menstruation that is painful enough to interfere with their daily activities (dysmenorrhoea). Period leave has been recognized in some countries 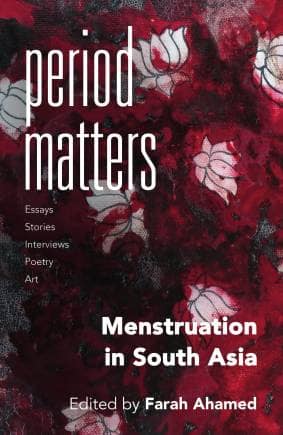 including Indonesia, Japan, South Korea, Taiwan and Zambia. The debate over whether paid period leave should be institutionalized at all workplaces in India has been going on for a few years now. Bills have been tabled by members of Parliament, and activists have voiced support for period leave in keeping with other demands of women’s movements.

At the same time, a large number of women (including those in positions of power) continue to vocally oppose period leave at workplaces. This seems counter-intuitive, and it is worth pondering why so many women might hold a stance that appears so contrary to their self-interest. I offer three possible ways to understanding this. First, young women are socialized into believing that they are impure and polluting when on their period, and the stigma extends to the workplace. Second, women are enculturated to tolerate pain in a world that is disturbingly comfortable with the fact that many women suffer debilitating pain while menstruating that we still do not have satisfactory medical solutions for. And lastly, toxic workplace capitalist cultures promote the prioritization of an individual’s work productivity over their health. In this essay, I will analyze and respond to these points to highlight the necessity of paid period leave at the workplace in India.

Women’s bodies and procreative capacity are considered to be ritually polluting in many cultures. What is the genesis of such a belief in India Sources point to different origins. The cultural meanings of menstruation as contaminating can be traced back to Brahmanical Hindu mythology from the Vedic times. In the Rig Veda, the slaying of Vritra (withholder of the waters, demon of droughts) by Indra is said to have manifested ‘guilt caused by the murder of a learned Brahmana’, following which he ‘ran to the women to protect him[self ]’ who took upon themselves a part of his guilt. That guilt of the Brahmin murder is believed to appear every month in women as the menstrual flow and is considered a mark of a woman’s innate impurity as well as sexuality.

Since caste structures have historically been maintained through control over women’s sexuality, and women are considered to be entry points into the caste system, menstrual taboos are yet another means of control over women’s sexuality in a caste-divided society. Even practices that seem contradictory to the narrative of menstrual pollution (such as the public celebration of a girl’s first menstrual cycle) end up reinforcing the patriarchal and reductionist narrative that a woman’s primary purpose is reproduction.

These are not mere outdated historic myths; they continue to seep into everyday rituals and practices prescribed for women in many Indian cultures. For instance, notions of purity and pollution are central to the practice of Hinduism in India. Some forms of human bodily excretions and processes are considered to be polluting, and by extension, so are the bodies that produce them. Childbirth and menstruation are two such processes, and hence, women are subject to various cultural restrictions during these periods such as being prohibited from entering the kitchen (as it is believed that a menstruating woman may contaminate the food) and the prayer room. Here, a menstruating woman is a powerful, corrupting ‘thing’; a ‘thing’ to be feared and shunned.

Similarly, other cultures have their own practices in place for the regulation of women’s bodies and sexuality during menstruation. Orthodox Jews observe the practice of niddah (separation), which includes the proscription of sexual intercourse during the wife’s ‘unclean’ period. With respect to Muslim women, there are at least two kinds of menstrual restrictions. First, menstruating women are forbidden from praying, fasting or visiting any place of worship during the month of Ramadan, as they are believed to be a threat to the sanctity of these practices. Secondly, they are not permitted to have sexual intercourse for at least seven days after their menstrual cycles begin, as they are ‘unclean’ until they have been through a ritual washing.

Important to this discussion is the understanding that such menstrual taboos across cultures are aspects of a ritual of purity and contamination and play a role in cementing women’s subjugated position in society, forming a basis for control over their sexuality. An impact of these deeply ingrained cultural practices is that women are socialized from a young age to believe that they are impure and dirty during their menstrual cycles. Like all physical processes that have to do with sex and childbirth, menstruation is considered a private activity and a public acknowledgement of the same is stigmatized. And these taboos extend to the public workplace. In the context of such stigma, demanding leave for menstruation is often not an option for all women. This is especially true for some industries where male employers tend to hire women primarily because they are cheap labour, easier to control, make fewer demands and less likely to unionize. Thus, women do not always have the bargaining power vis-à-vis male employers to request period leave every month. In a society plagued by menstrual stigma, period leave cannot be left up to individuals to seek when required. The provision of paid leave for menstruation must be institutionalized at the workplace for all women for non-negotiable accessibility.