Snappy comedy, man versus nature cautionary tale, a romance and a shape-shifting horror film — Amar Kaushik’s 'creature feature' is too many things to be entirely centred. The comedy stands out.

Amar Kaushik’s Bhediya is a lot like his hit debut film Stree (2018), which combined horror and comedy for a signature mass-appeal effect. Bhediya is more complex as a story but not as assured in its multi-pronged treatment like Stree was. But here, too, in Niren Bhatt’s screenplay, it is the everyday humour bordering on farce and heavy physical comedy that stands out. Kaushik’s handling of the comic material is more mature compared to the other strands — mostly relentless commentary about the film’s philosophical premise, which is the dangers of messing with nature; and also a strident-sounding case against parochialism and stereotyping of people from the Northeast. 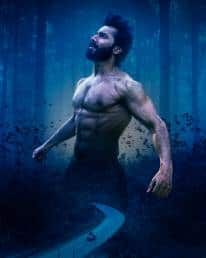 The three-dimensional works well in scenes of terror unleashed by a shape-shifter, a werewolf, at the centre of the drama. But more so in the expansive, multi-hued green covers, waterbodies and mountains of Arunachal Pradesh where it is shot. Some of the shots have a fake, VFX-fuelled look to them, but the location is mostly a visual delight.

Delhi contractor Bhaskar Sharma (Varun Dhawan) takes his studious cousin Guddu (Abhishek Banerjee) along on a work trip. A local friend Jomin (Paalin Kabak) meets the two and the three hit the road to Arunachal Pradesh together. Bhaskar will have to persuade locals of a town there to allow part of the jungles — which they depend on for survival, the peripheries of which they live in — to be cut so that a road can be built for his Delhi boss. The build-up is slow. The clues that Bhaskar and his friends are in for a tryst with the supernatural is obvious from the moment they reach the house they are living in. The locals refuse to cooperate but Bhaskar’s spirit is high and his focus on his goal is unwavering, until he has an encounter with a wolf in the jungles. A wolf bites him and soon enough, he shows signs of shape-shifting. He turns into a werewolf by night, while during the day he is a hustling contractor and confused friend. Some elements in the screenplay make absolutely no sense. There is only one doctor looking at Bhaskar even when he is vomiting blood — a veterenarian, Dr Anika Mittal (Kriti Sanon), despite there being a fully-equipped hospital in the town. Sanon and Bhaskar seem to have a chemistry but it’s insignificant in the larger scheme of things. Some of the dialogues, especially between Jomin and Guddu, are replete with “message” capsules about Northeast-shaming and who comprises an outsider. The over-emphasis diffuses that message completely, and becomes farcical. The nature-versus-man cautionary tale takes more of a centrestage through a local oracle kind of character, Raju Mishra (Deepak Dobriyal) — again, a trope that worked well in Stree.

When Bhaskar discovers a shattering truth about the jungle and why he was bitten by the animal, the story hurtles to a poetic climax in the deep end of the forest overlooking a breathtaking cliff. An epic wolf-versus-man fight sequence leads to the end.

Werewolf movies are an old subgenre of horror films — especially in Hollywood. They are a destination for staggering special-effects work. They also make for stark, startling tales of self-awakening and a persevering means of inspecting our relationship with the beast we all know lives inside of us. An American Werewolf in London (1981) by John Landis and Wolf  (1994) by Mike Nichols are two standout films. This year itself, Hollywood has produced Werewolf by Night with Gael Garcia Bernal and Wolf Like Me, a romance by Abe Forsythe, with Isla Fisher and Josh Gad in lead roles. Filmmakers have worked around lycanthropy, the mental disorder in which the patient believes that he is a wolf or some other beast, for unforgettable moments of horror on screen. 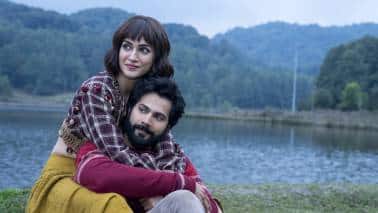 Dhawan with Kriti Sanon in a still from the film.

So Kaushik’s Bhediya is path-breaking in India as a genre film. But because of the script’s diffused energy and focus, and for its generous dose of silliness, it works best as a comedy. Does the shape-shifting man, for example, always has to be in his boxers, and does the furry creature’s tails always have to propel itself through the multi-coloured boxers? The film’s most memorable scene is a brilliant juxtaposition of a howling werewolf on top of a rickety Maruti car’s hood and his two friends trapped inside the car, while a classic by a much-parodied playback singer from Bollywood blasts from the car stereo. The howling-nasalising cacophony is a complete hoot. You get the drift; you know why you should watch Bhediya.