Last week, 'USS John Paul Jones' ventured into India's Exclusive Economic Zone, triggering questions like how are maritime boundaries drawn, who gets to decide the laws that govern the seas and who is to enforce them?

A 2001 photo of 'USS John Paul Jones', the US Navy's guided missile destroyer that last week transited through the seas off Lakshadweep. Image credit: Fred Greaves/Reuters.

The trumpet blew from the admiral’s flagship; the great fleet of Yusuf Hamid, commander of Imperial Turkey’s forces in the Indian Ocean, heeled west, and disappeared into the darkness. For two months, travellers along the coast had seen the flickering fire from the great siege cannon. The Portuguese defenders of the citadel of Diu had been reduced—but the Turks had also reached breaking point. Georgius Huszthius—a one-time student at Hungary’s University of Pécs, whose extraordinary life led from a village of Croatia to service in the Turkish fleet—recorded that their fresh water was spent, their meat had rotted, and their bread was full of worms.

Faced with the arrival of superior Portuguese naval forces and lacking support from Gujarat’s feudal lords, Hamid Bey realised his forces had no hope of victory: on the morning of November 2, 1538, Georgius Huszthius was ordered to signal retreat. From the 1540s on, Portugal’s system of cartazes, licences issued to merchant ships traversing India’s western coast for a fee, solidified. The revenues, historian Sohinee Basak has recorded, helped make Portuguese colonial power self-financing.

Last week, as the United States Navy’s guided missile destroyer USS John Paul Jones transited through the seas off Lakshadweep—an act designed to challenge Indian maritime law—the questions that arose during the long colonial struggle to control Asia’s oceans were once again resurrected. How are maritime boundaries to be drawn? Who is to decide the laws that govern the seas? Who is to enforce them?

In some senses, the furore around the USS John Paul Jones is the result of a media that hasn’t been paying attention: There’s in fact nothing new about United States Navy Freedom of Navigation Operations, or FONOPs, in Indian waters. Ever since the 1990s, the United States Department of Defense has regularly published information on FONOPs; in recent years, the United States Navy has publicised these patrols on its website.

New Delhi has, however, protested against United States intelligence-gathering activities inside its Exclusive Economic Zone on several occasions. In 2001 and 2004, the activities of the survey ship USNS Bowditch drew ire from India’s ministry of external affairs; in 2007, operations by the USNS Mary Sears led to an official diplomatic note of protest being issued.

For its part, the United States asserts its navy is asserting important freedom-of-navigation laws key to the governance of the global maritime commons against both friends and foes, “based on principle rather than identity of the coastal State asserting the claim”. These principles, Washington’s argument goes, cannot be effectively made against China unless the United States and its allies also observe them.

The USS John Paul Jones incident has served a warning to New Delhi that alliances with the US come with terms and conditions—some of them exceedingly unpleasant.
These arguments are, however, disingenuous. FONOPs have been directed against a swathe of states in geopolitically-crucial Asia—Japan, South Korea, North Korea, China, Taiwan, the Philippines, Vietnam, Cambodia, Malaysia, Indonesia, Thailand, Myanmar, India, Pakistan, Bangladesh, and Sri Lanka—but rarely against Western partners.

Even though the United States rejects Australia’s claims in Anxious Bay, Encounter Bay, Lacepede Bay, and Rivoli Bay, as well as the borders it has drawn around the Abrolhos islands, Washington has never used FONOPs there to assert its principles. In the case of Canada’s strategically vital Northwest Passage, where global warming will draw a growing volume of Atlantic-Pacific transport in coming decades, it has cut a side-deal allowing United States submarines to be stationed there.

“Though the United States does conduct FONOPs against not only rivals but also allies and partners, it still picks and chooses, conducting FONOPs in areas of greater geostrategic significance to U.S. interests,” expert Rachell Odell has noted. “Instead of using military operations to try to impose its version of the so-called ‘liberal rules-based international order’ on a world of mostly formerly colonised nations, the United States should adopt a less militarised approach toward freedom of navigation.”

Failure to resist US naval operations in territories India claims undermines the legitimacy of New Delhi’s opposition to similar naval operations by China
New Delhi, though, has tied itself up in some knots of its own making. The tensions go back to 1976 when India passed the Maritime Zones Act, requiring all foreign warships to seek permission before transiting through its territorial waters—even when engaged in what international law calls “innocent passage”, or conduct that poses no security threat. In addition, the Act allowed India to mark out designated areas in India’s Exclusive Economic Zone (EEZ) through which foreign ships could not transit—a challenge, in the view of the Western powers, to the traditional right of freedom of navigation.

New Delhi’s immediate strategic concerns were shaped by Cold War rivalries, and the United States’ deployment of its Navy during the Bangladesh war—but like many other nation-states in Asia, its imagination was conditioned by the brutal legacy of colonialism.

In 1995, when India signed the United Nations Convention on the Law of the Sea (UNCLOS), it issued a separate declaration, asserting that “the provisions of the convention do not authorise other states to carry out in the EEZ and on the continental shelf military exercises or manoeuvres, in particular those including the use of weapons or explosions, without the consent of the coastal state”.

The Enrica Lexie case, where two fishermen from Kerala were accidentally killed by counter-piracy personnel guarding an Italian ship, also illustrated the tensions between Indian maritime law and the international order. Customary international law holds that, where a crime was committed in international waters, jurisdiction rests with the nation-state in which the vessel was flagged. In 2013, though, the Supreme Court asserted Indian criminal jurisdiction extends beyond its territorial waters, into its so-called contiguous zone. 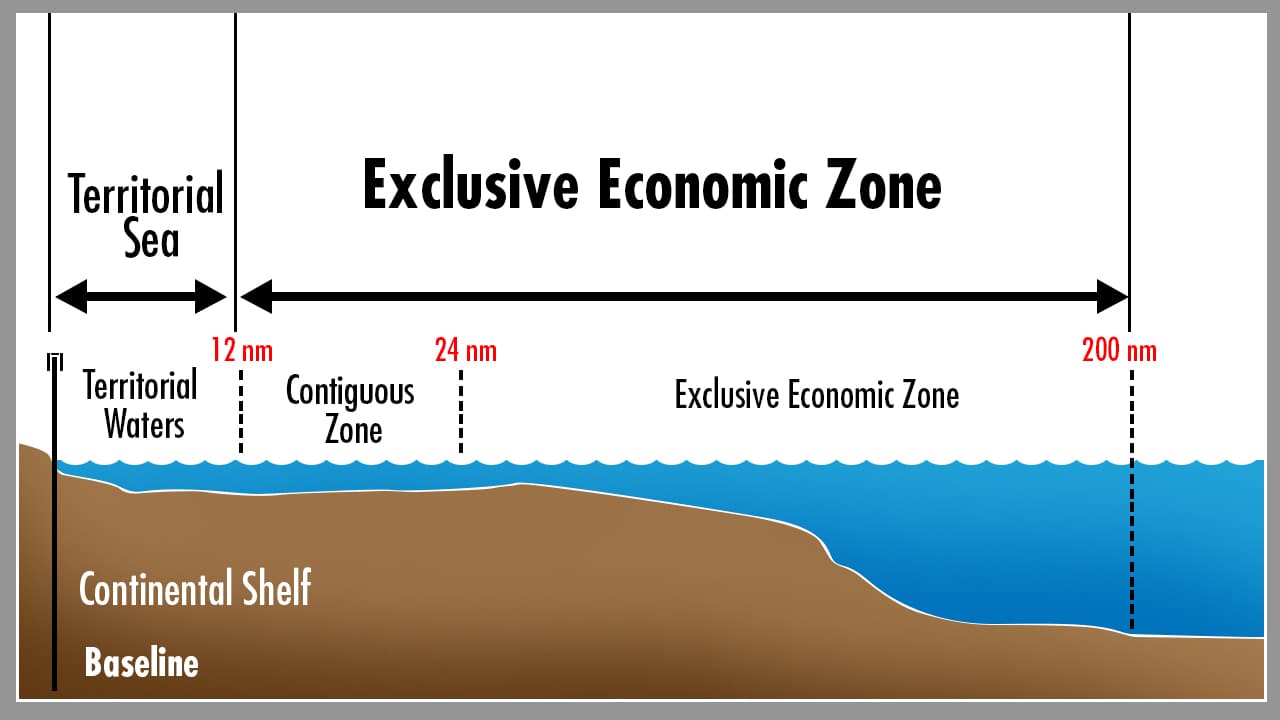 New Delhi isn’t alone, though, in making claims that what customary international law suggests is contentious. The United States, notably, has never signed on to UNCLOS, the principles of which it claims to be defending. China has—but resiled on its commitments after the International Court of Arbitration at the Hague ruled in favour of the Philippines in the dispute over the South China Seas. Local laws, moreover, have been put in place by Beijing to obviate its treaty obligations under UNCLOS, leveraging what the United States has called “a set of rotating arguments, with several legal justifications in play”.

For years now, New Delhi has sought to sail a thin—and inevitably inconsistent—line. Even as it opposes China’s expansionist claims in the South China Sea, India has refused to participate in joint patrols with the United States through the contested waters. The logic is sound; New Delhi does not want to risk retaliation by the People’s Liberation Army Navy in Indian waters. Yet, the resistance to joint operations limits the actual value of fledgling. Similarly, while New Delhi has expelled Chinese survey vessels operating in Indian waters, it has refrained from actual action against FONOPs.

As India struggles to navigate an increasingly perilous world, these questions pose sharp, real-world dilemmas. New Delhi understands the importance of resisting China’s territorial claims in the South China Sea—but finds itself on the same side as Beijing in resisting the United States’ use of naval assets in its waters. Failure to resist United States naval operations in territories India claims, moreover, undermines the legitimacy of New Delhi’s opposition to similar, Chinese operations.

As it reaches out to the West to balance the threats posed by an increasingly powerful China, the John Paul Jones has served a warning to New Delhi that alliances come with terms and conditions—some of them exceedingly unpleasant. The simple truth is that the laws of the seas—like the so-called liberal international order itself—are artefacts of power, shaped by those with the power to enforce them, not moral axioms. India has long elided over the problem; the time for tough choices may be drawing closer.