There are five reasons why the push for ethanol is not as good as it sounds.

Scania -Low demand forced Volkswagen Group company Scania to shut down its bus body building in India in 2018. The company competed against Volvo in the premium bus space. Its trucks division however continues to operate (Image: Scania)

All of a sudden, a strong lobby appears to be emerging advocating the use of 20 percent ethanol in petrol for use by automobiles. The argument favouring the use of ethanol is that it is cheaper than petrol, good for reducing fuel import bills, and gives a higher price to sugarcane growers.

All the three assumptions are fallacious. 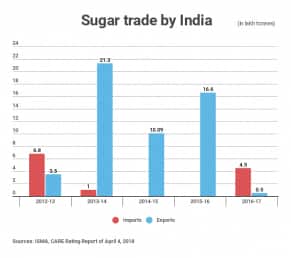 The proposal for blending petrol with ethanol (another word for industrial alcohol) gains volume each time India faces a glut in sugar production. One of the arguments is that the use of ethanol will allow for excess sugarcane to be used for producing ethanol. This way sugar prices will stabilise. It does not take into account the years when sugar production is low. As Table 1 (above) shows, there have been years when India has been a net importer of sugar. Building a fuel policy on an uncertain crop is foolhardy.

Another argument is that sugar production in India will continue to grow if it can benefit from the sale of ethanol as a vehicle fuel. But should it be allowed to grow? This is because sugarcane is a water-intensive crop. While it is okay for the crop to grow in Uttar Pradesh which has perennial rivers, that’s not the case in Maharashtra which does not have enough water. The industry uses up groundwater resources as well, which harms the entire state.

As the Indian Sugar Mills Association (ISMA) pointed out in March, out of the 2017-18 production estimated at 29.5 million tonnes, UP is expected to produce 10.5 million tonnes, Maharashtra 10.13 million tonnes and Karnataka 3.5 million tonnes. The output of sugarcane in Maharashtra must be brought down, which is possible if water consumption is priced. Maharashtra’s politically powerful sugar producers have ensured that the rest of the state does not get the water (read here and here).

Only 20 percent of the state’s cultivable land is irrigated compared to 67 percent in neighbouring Madhya Pradesh. Thus, the sugar industry in Maharashtra has become a parasite, which causes farm distress. Therefore, diversification into ethanol is risky.

The use of ethanol as an alternative fuel works for countries such as Brazil with its abundance of water and a low population density. India, on the other hand, is water-stressed and has a much higher population density. Brazil’s population density (people per square kilometre) is 25, while India’s is 412 — thus, comparing India and Brazil just does not make sense. 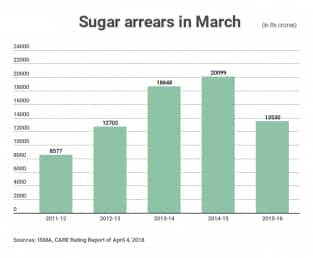 Sugar factories haven’t always been fair to the farmers. Table 2 (above) shows the payment arrears to farmers over the years. With the political and financial support they get from the government, factories should be paying farmers upfront. This is especially important because a farmer can sell his produce only to a specific factory. In other words, sugar producers, and not the farmer, has the upper hand.

Also, there are good reasons to believe that the demand for ethanol is only to enhance the profit sugar barons already make, but off the sugar books.

Below are five points highlighting why the push for ethanol is not as good as it sounds.

One, to say that ethanol is cheaper than petrol both products need to be placed on a level field. Ethanol costs must be compared with the price of petrol in the international market. If the same duties and taxes imposed on petrol are imposed on ethanol, chances are that the latter will be almost as expensive as the former. Add the cost of water that goes into cultivating sugarcane (it is free at the moment), take way the minimum support price it enjoys, and add taxes too (because agricultural income applicable for sugarcane is tax-free) to have a more realistic comparison between the two.

Two, a disruption in automobile technology is already underway. The government is working towards phasing out vehicles powered by hydrocarbons and wants to usher in electric vehicles (EVs). Given this, it’s not fair to ask the industry to modify its technology to use ethanol in the phase between hydrocarbons and Evs.

Three, to save fuel import bills, the sugarcane industry, as well as the rest of the agro industry, should be persuaded to convert all agro waste into methane, which can be used as a fuel similar to CNG. Even back-of-the-envelope calculations show that India’s potential for methane generation could be worth over Rs 18 lakh crore (or Rs 18 trillion) a year.

This is without including agro-waste, which could make the value swell three times more. During 2017-18, India imported petroleum, oil and lubricants (POL) worth Rs 5.89 lakh crore. Juxtapose this against Rs 18 lakh crore. Promoting methane generation makes more sense than promoting ethanol as a vehicle fuel.

Four, the fortunes of ethanol are linked with alcohol. The price difference between industrial alcohol and that which is used in potable liquor is at least 1:10 and this could go up to 1:100 if taxes and duties on alcohol are included. This is one reason why states do not want this to come under the central levy of the Goods and Services Tax (GST).

The illegal diversion of industrial alcohol into potable alcohol means slush money for both the sugar barons and their political friends. Creating another official outlet for alcohol-use as vehicle fuel could result in one more channel for generating slush funds. That is another reason why the creation of this mechanism is not good for either the industry or the country.

Finally, a report by Narendra Mohan, director of the National Sugar Institute, Kanpur, shows (in page 5 and 6), the revenue through sale of molasses, bagasse and press-mud. Incomes from alcohol have been kept out. It is the classic example of privatisation of profit and socialization of losses.

The government bails out the industry because its incomes from traditional sources are inadequate. But it does not account for incomes not registered on the sugar industry’s books. Bagasse could be used for methane generation. But the sugar industry shows the lowest return on this by-product, by showing its use for burning. The lucrative parts of sugarcane derivatives are kept aside for private consumption.

Clearly, the sugar industry remains a bitter pill for the nation to swallow. This current push for ethanol will adversely affect the interests of Maharashtra’s farmers and the economic health of India.

Ethanol is obviously a red herring for other interests and objectives.