Digital India | Growing non-cash payments a positive sign, but not without challenges

The Digital India programme is one of the flagship programmes of the Government of India, and among multiple other dimensions, it has a strong focus on making India’s payment landscape go paperless, faceless and cashless. With the Reserve Bank of India (RBI) ensuring 24X7 Real Time Gross Settlements (RTGS) and National Electronic Funds Transfer (NEFT) along with the rising popularity of the United Payments Interface (UPI), it makes a case to understand and evaluate the digital payments landscape in India.

Economic theory states that money has three primary functions — as a medium of exchange, a store of value, and a unit of account. The form of money has evolved over time from stone to gold and other metal coins to paper notes and, finally, to electronic currency now. In today’s day and age, cash is being viewed more as a store of value rather than a means to make payments.

What are the advantages of electronic currency over paper and coin? E-payments are faster as they eliminate any constraint on time and location. They offer higher security using methods such as tokenisation and encryption. The possibility of mismatch and theft reduces as there is advanced record-keeping allowing improved transparency. These reasons are reflected in the growing popularity of digital payments in India.

The Payments and Settlements Data released by the RBI in its latest annual report shows that the total volume of digital payments in non-cash payments increased to 98.5 percent during 2020-21 as compared to 92.5 percent during 2017-18. Similarly, the corresponding figures in terms of value stand at 96.2 percent in 2020-21 as compared to 94.4 percent in 2017-18. This implies that the banking system has practically reached full electronic mode. Within the variety of digital payment options for retail payments, NEFT by value and UPI by volume stand out to be the most popular methods.

Furthermore, an analysis of the data from the RBI’s monthly bulletins shows that digital payments proved to be useful during the COVID-19-induced lockdowns (in Q1’s of 2020 and 2021) as the proportion of digital payments volume in non-cash payments observed an increase from 97 percent (Q4’19) to 99 percent (Q1’20), and comparing the first two months of Q4’20 with Q1’21 shows movement from 98 percent to 99 percent.

Additionally, the scale of economic activities turns out to be a significant determinant of digital payments. For instance, Q1’21 COVID-19-induced lockdown was less severe in terms of operations of economic activities compared to Q1’20. Consequently, we observed 18 percent decline (negative growth) in the volume of digital payments in Q1’20 over Q4’19. However, the first couple of months for Q1’21 show an average 5 percent growth over the same months of Q4’20. 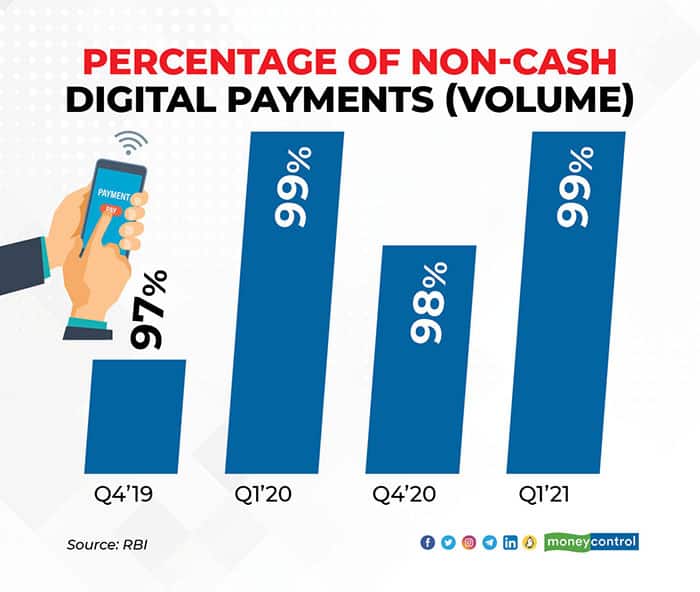 The comparison of digital payments and cash payments becomes tricky because of the lack of record-keeping for the latter. However, some proxy methods can be employed to understand the true picture. A pan-India empirical study conducted by the National Payments Corporation of India in 2020 reveals that one-third of Indian households are using digital payments in one form or the other. This advancement appears more pervasive as even 25 percent of the bottom 40 percent income class were part of this group using digital. This rapid evolution is, however, not without flaws, and raises concern about frauds that can take place through data breaches, fake UPI payment links, and fake cashbacks. The recent report released by credit bureau TransUnion finds a 28.32 percent increase in suspected fraudulent digital transaction attempts against Indian businesses during 2020-21 over the previous year. An RTI reveals that Indian banks have cumulatively suffered frauds around 4.5 percent of total bank credit as of March 31.

The growing popularity of the digital payments among both users and institutions alike calls for continuous efforts by regulators and authorities concerned on the dual fronts of increasing penetration of electronic currency while safeguarding the interests of user data and privacy. Consumer protection awareness is rightly being focused upon which covers threats such as phishing, dubious links, and SMS spoofing.

Important lessons can be drawn from other countries undergoing a similar transition. For instance, the European Union’s General Data Protection Regulation, known to impose stiff fines to ensure data protection and countries such as China and Singapore conducting cross-sectoral and cross-regional emergency drills for cyber-attacks.

Finally, it needs to be borne in mind that the fraudsters are continuously growing and adapting technologically. Hence, continuous vigilance is the key which will enable to truly realise the ‘divinity’ of digital.

Paras Shridher is a Risk Analyst with American Express, and Trishla Singh is co-founder of CER India.