Commodities | Derivatives trading suspension is futile. Its consequences are damaging

On August 27, in an attempt to curb the rise in domestic wheat prices, the government banned export of wheat flour, maida, and semolina. On September 9, rice exports were also banned. These steps follow a series of measures that the Government of India has taken over the past two years to combat the sharp rise in food prices.

One of such measures also includes the suspension of derivatives trading of several commodities (chana, mustard, moong, wheat, non-basmati rice, soybean, refined soy oil, and crude palm oil) that was announced last year. This contrasts with the steps taken worldwide, where regulators have approved derivative products on new commodities to provide a tool to value chain participants to insure against such adverse price movements.

In this article, we answer these questions using the case of mustard seed derivative contract that was suspended in October 2021. Our analysis on other commodities such as chana yields similar results. The supply chain disruptions due to the pandemic-induced curbs and restrictions resulted in a rise in retail prices of all major vegetable oils (graph above). With over 60 percent of India’s edible oil demand met by imports, much of the rise could be attributed to international prices, which have seen a similar uptrend since March 2020. India's vegetable oil market primarily comprises palm oil (38 percent), soybean oil (24 percent), mustard oil (16 percent) and sunflower oil (7 percent). The remaining oils that are consumed in the country are cottonseed oil (6 percent) and groundnut oil (5 percent).

Except for mustard oil where most of the demand is met through domestic production, the other four major oils are mostly imported. As consumers switch from the more expensive oil to a cheaper oil, any global shock in oil prices would affect the demand for mustard oil in India, and have a spillover effect on its price. Thus, as edible oil prices internationally soared, domestic oil prices also went up across the board.

Missing Rationale and the lack of evidence

While the order issued by market regulator SEBI does not provide any rationale behind the suspension of the mustard seed contract, the commonly-held view is that excessive speculation / manipulation on derivatives market could exacerbate price rise or lead to higher variability in prices. 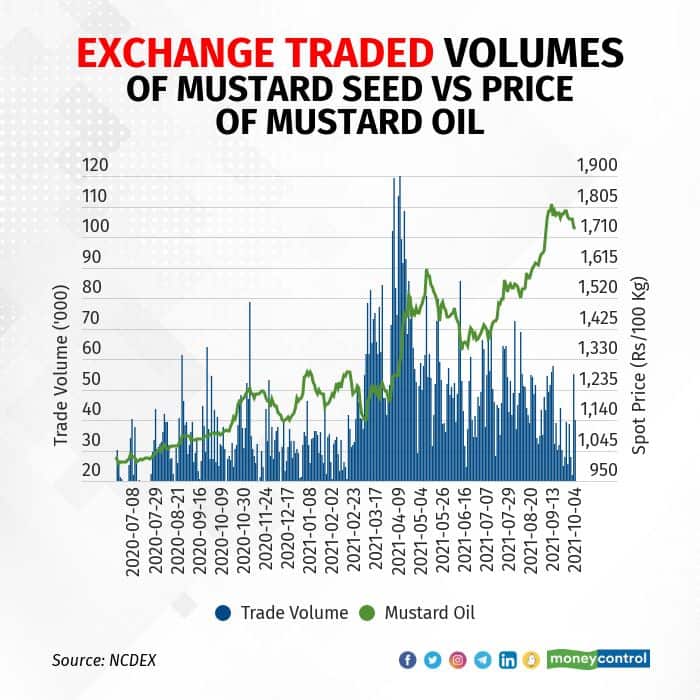 However, the exchange traded volumes on mustard seed derivative contracts depict a different story (graph above). Even though the price of mustard oil shows an uptrend, there is no similar trend in the volumes of mustard seed futures contract. Statistical tests show no evidence that the volumes on futures market led to higher spot market prices of mustard oil. Thus, the popular perception that trading activity on derivatives market caused the prices on spot market to rise is not supported by empirical evidence.

The next question pertains to the effectiveness of the ban. Did the suspension bring down the observed variations in mustard oil prices? Once again, we do not find any such evidence. On the contrary, we find that the volatility of prices continued to increase post-suspension. In terms of price levels, the period immediately following the suspension saw prices of mustard oil decline, but so was the case with all other vegetable oils including soy oil and crude palm oil, which continued to trade on the derivatives market unlike mustard seed. A question to ask next is: how would mustard oil prices have behaved if the suspension had not happened. We answer this question using the synthetic control approach. The method estimates the counterfactual i.e., the price pattern of mustard oil had the intervention (derivatives suspension) not occurred. Our analysis indicates that even without the contract ban, prices of mustard oil on the spot market would have fallen over the next two months (graph above), rendering the derivatives contracts suspension futile.

Prior to the ban, the mustard seed futures contract price provided a national reference price for spot market transactions. This is confirmed from price discovery analysis, which shows that the futures market had a dominant share of 64 percent in uncovering the true price of mustard seed as the supply-demand dynamics changed. This means that the futures market served as a reliable price signal for farmers as well as for other value chain participants such as traders, processors, exporters etc. However, this role came to a grinding halt as the suspension was announced, and left all the value chain participants in a state of flux.

Further, we find that the strong linkages that existed between the mustard seed spot and futures market prices prior to the suspension ceased to exist, as more divergences between the prices of the two markets were observed in the remaining months of the existing contracts.

To summarise, there is no evidence that derivatives trading led to higher prices or that the suspension had any effect in bringing down price variability. Rather, the decline in price levels was observed across all oils, irrespective of their derivatives trading status.  Price surges are typically rooted in the underlying demand and supply factors, as observed in earlier studies such as the Abhijeet Sen Committee Report (2008) and the IOSCO Task Force on Commodity Futures Market (2010).

The Report of the Expert Committee on Integration of Commodity Spot and Derivatives Markets (2018) also argued that outright bans erode the confidence of participants in the domestic derivatives markets. Evidence from past suspensions shows that once a contract is banned or suspended, it is difficult to bring back trading activity to even the pre-ban levels once the ban is revoked. Market participants have an easy choice to hedge their risks on international exchanges, where no such regulatory uncertainty exists.

As argued elsewhere, once such migration occurs, there is no return. It, therefore, does not come as a surprise that no other commodity exchange in the world has suspended any commodity contract despite the rise in prices that has been seen globally.

At a time when most exchanges worldwide are trying to expand their coverage of commodities, such suspensions deteriorate India's position in providing a global price benchmark, despite being a major producer and consumer of several agricultural commodities. The development of a globally competitive agri-derivatives market should be our national priority. Steps must be taken to strengthen the spot and derivatives market infrastructure. Strict market surveillance and effective enforcement, transparency and timely availability of information on trends in production and existing stocks will go a long way in doing away with the fears of market misconduct.

It is time that the ban is reviewed on an urgent basis and the development of agri-derivatives market is supported in India. The temptations to impose a ban and reverse the gains achieved over several years must be resisted.