UPCOMING EVENT:Know how Global Investing can be spread beyond the US markets by joining an engaging webinar on November 30, 11:30 a.m.
you are here: HomeNewsEnvironment

Tsunami protection: Irula tribe of Pichavaram is planting mangrove species, to build both a bio-shield and businesses

In the process of learning to nurture the mangrove forests, Irulas have learnt new skills that have lifted them out of abject poverty and given them fresh agency in their lives.

Pichavaram, Cuddalore: On December 26, 2004, a tsunami in the Indian Ocean wreaked havoc along the coasts of several countries of South and Southeast Asia. However, for a small tribe called Irula living in Pichavaram, Cuddalore district, Tamil Nadu, the tsunami would prove to be a blessing in disguise.

The Irulas are a semi-nomadic tribal community of hunter-gatherers who lived a marginalised life eking out a living by hunting snakes and selling the skins. But after the tsunami, the government finally included them on the List of Scheduled Tribes and provided them with the necessary certificates. This allowed them access to welfare schemes and granted them much needed food and livelihood security.

When the disastrous waves receded, ravaged coastal communities were left picking up the pieces of their lives. But in Pichavaram, the story was dramatically different. A post-calamity analysis undertaken by the scientists of the MS Swaminathan Research Foundation (MSSRF) revealed that the Pichavaram mangrove forest protected the coastal villages from the tsunami.

The mangrove ecosystem with above-the-soil-aerial roots is very eco-sensitive. They decrease both salinity in the soil and brackishness in the groundwater. They also fix nitrogen content in the soil, thus aiding in climate change mitigation. The mangroves also make ideal nesting sites for coastal fauna including fish, corals, crustaceans, cetaceans, birds, and reptiles — thanks to the complex web of chemicals and tidal cycles.

Though the Irulas were now enlisted in the Scheduled Tribe list, which gave them access to welfare schemes, they were still in need of mentoring and livelihood training.

"The fishbone pattern is an efficient method to facilitate tidal flushing which drains and quenches the aerial roots of the mangroves alternatively every six hours, thus enriching the fish catch and fish diversity," says project coordinator, Priyangha. The Irulas now wait for the catch at their doorstep every morning.

According to Nagamuthu, 39, an Irula beneficiary, “When the creeks were flooded by the tides, the fish quite literally came to the doorstep of the Irulas living in thatched-roof dwellings." He grins, and adds: "this has reduced our labour, increased our nutrition intake and food security as well as augmenting our income and savings.” The Irulas are also expected to patrol the mangrove forests to protect it from poachers. 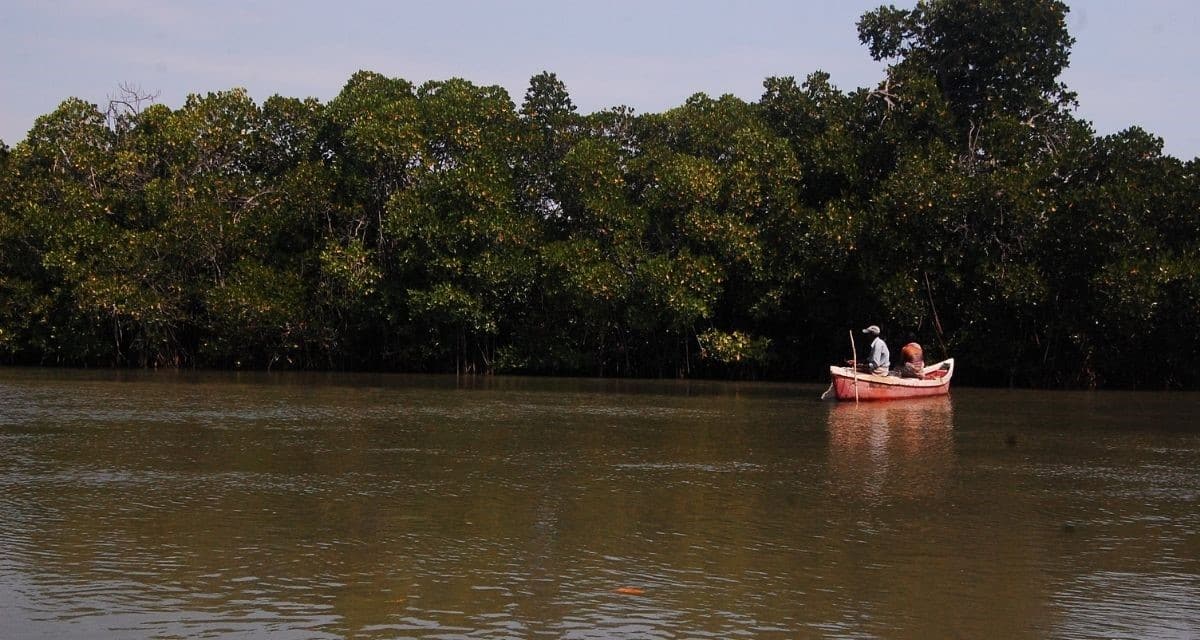 MSSRF trained the Irulas to plant mangrove species in a fishbone pattern.

From starvation to sustainable fishing

"In our mangrove project, we have integrated fish and crab culture. So plantation of mangroves is done along the bunds of the farm pond," says Veerappan, 60, a beneficiary amongst the Irula community in Pichavaram.

Veerappan does fishing, crab trapping and prawn farming. Agricultural labour supplements his income along with poultry farming today. He lives in a concrete cement house given as compensation to tsunami survivors and maintains his family of 14 members, with a monthly income of Rs 20,000.

Oysters are also a protected species in the Mangrove Forest Division. The Irulas are permitted to harvest protein-rich oysters for consumption purposes only, given their lack of food security and nutrition.

Pichakanna, a tribal elder says, “No one should face starvation as we did. We are coastal dwellers, we eat fish. We knew the skill and art of hand fishing but we did not know fishing on a bigger scale till we were trained by MSSRF. Now we are able to earn our livelihood respectably, and we also get to eat a full meal. This has given us confidence, better health, better standard of living, food and livelihood security.” 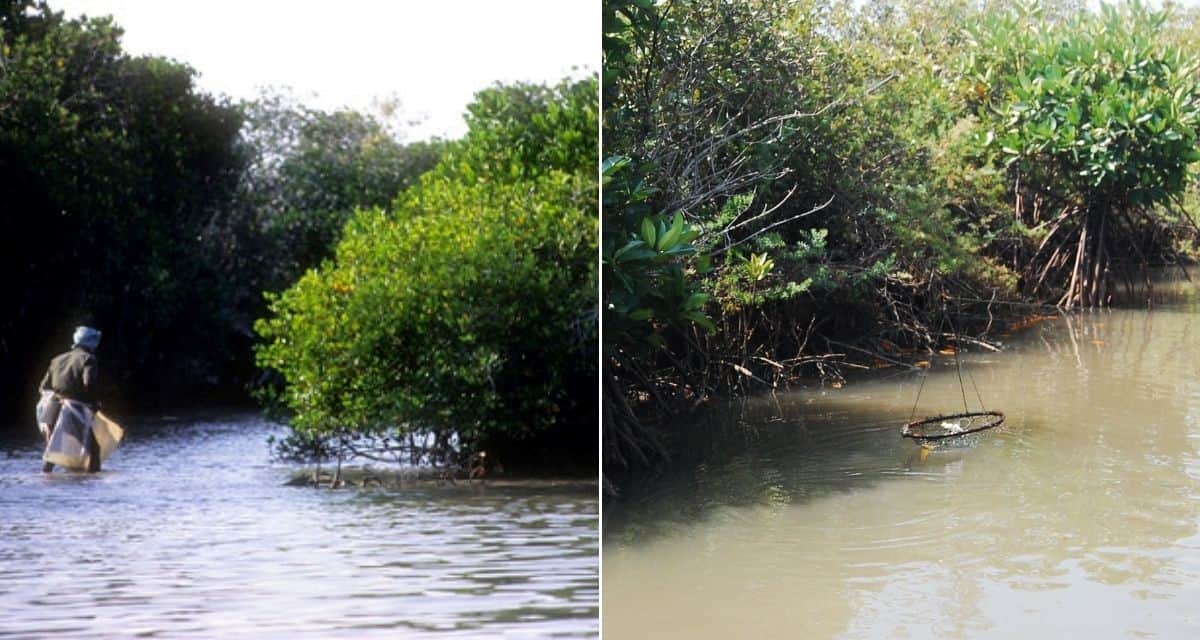 The fishbone pattern of planting mangroves has made fishing easy.

Livelihood training has also opened up opportunities in eco-tourism, and has gone hand-in-hand to uplift the community along with scholarships for the education of the younger generation, access to water and sanitation, awareness about menstrual hygiene, the exercise of democratic rights such as voting, and better health indices, among others.

K. Gunashekar, 27, is a contractual boatman of the Tamil Nadu tourist department. He earns Rs 500 per day, besides a small tip, every fortnight. Posing for the camera confidently, one hand on his hat and the other, clutching a bamboo oar, he gushes about reservations and scholarships that have helped kids in the community complete their education, and go on to etch out prosperous futures for themselves, earning post-graduate degrees, preparing for competitive exams and going abroad to study and work. A tribal elder, Papa, ruefully remembered the days when they “were treated like slaves”, taking whatever work came their way, their women vulnerable to even sexual exploitation. "Now we have peace and happiness; we are earning our living through this work which has increased our dignity when we compare our old life,” she says.

Women, who handle the terrestrial fishing operations, now have access to gender-based toilets in fish landing centres that dispense sanitary napkins and condoms. The younger generation of Irula girls is regularly supplied with feminine hygiene products at their doorstep by ASHA workers of the National Rural Health Mission.

From being an obscure tribe living in extreme poverty, the Irulas have transformed into self-sufficient people with help from the MSSRF, the state government and other NGOs. They are now guardians of the Pichavaram Mangrove Forest, living in harmony with nature, a model for sustainability and conservation.
Malini Shankar
Tags: #Biodiversity #conservation #Earth 360 #livelihoods #Mangrove #menstrual hygiene #MS Swaminathan Research Foundation #Pichavaram mangrove forest #sustainability #sustainable fishing #tsunami
first published: Aug 14, 2021 05:43 pm