This is how COVID-19 vaccines will travel from Pune, to across India

A network of especially enabled truck, cold chain network in airports, aircraft and warehouses is being used to reach the doses, first to regional hubs and then to 41 identified locations.

From 5 am on January 11, the roll out of COVID-19 vaccines in India began with trucks carrying consignments of Covishield vaccine crossing the gates of Serum Institute of India, in Pune.

Over the next two days, it will reach over 41 locations across the country, with the first doses to be given from January 16.

Here is how the vaccines will travel.

By 10am, over 15,000 kg of vaccines left the gates of Serum Institute in Pune. The consignment was divided, with one part going to the Pune airport, and the rest to the one in Mumbai.

Read more: Mumbai airport to handle over half of SII's Covishield vaccine

The vaccines were transported in trucks, specially fitted with temperature-controlled storage that will keep the doses intact.  These trucks are filled with door sensors to check the inside temperature, which can drop to minus 25 Celsius if required. The trucks even give information on how many times the door was opened.

At the airport, Cool Dollies or mobile refrigeration units for airside transportation, are used to load the cargo in aircraft.

From Pune, SpiceJet, Air India and GoAir have already flown these vaccines to their next destinations, including in Delhi and Ahmedabad.

Aviation regulator DGCA had earlier released guidelines on the use of dry ice to transport vaccines. Read them here.

"We have Cool Chambers and Cool Dollies to maintain temperature required for these vaccines at the cargo terminal and during transit between aircraft and terminal or vice versa. Our both the terminals can handle around 5.7 million vials in a day," said Videh Kumar Jaipuriar, CEO, Delhi International Airport Ltd. 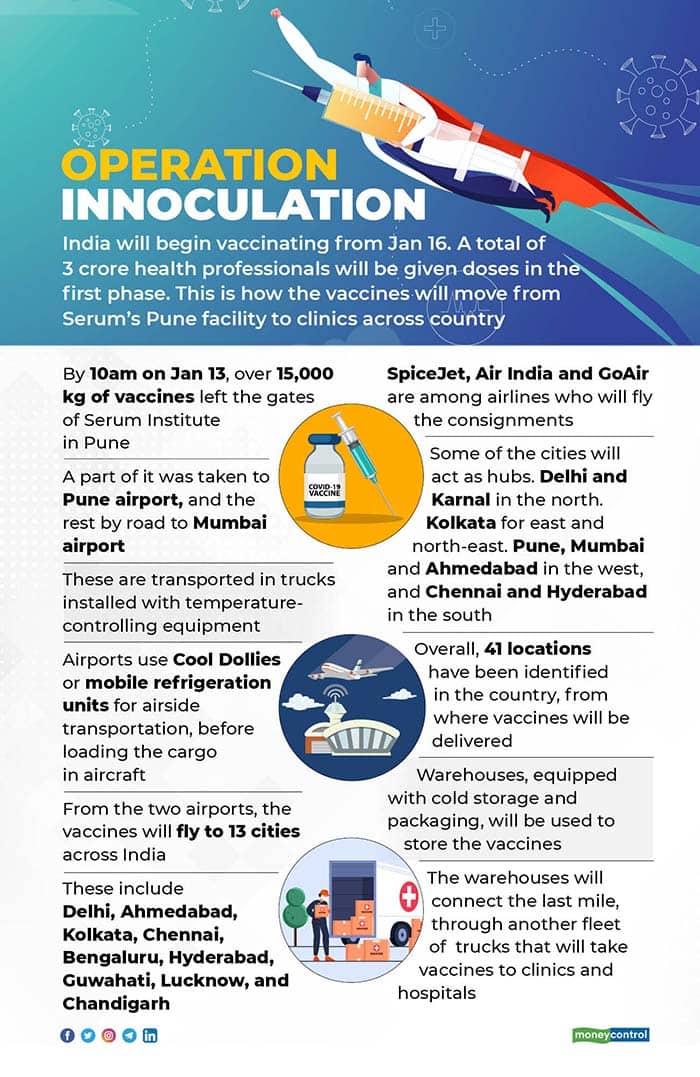 The vaccines will fly to 13 cities across India. These include Delhi, Ahmedabad, Kolkata, Chennai, Bengaluru, Hyderabad, Guwahati, Lucknow, and Chandigarh.

Some of these cities will act as regional hubs. Delhi and Karnal in the north. Kolkata for east and north-east. Pune, Mumbai and Ahmedabad in the west, and Chennai and Hyderabad in the south.

Overall, 41 locations have been identified in the country, from where vaccines will be delivered over the next two days. For instance, from Chennai, the vaccines will reach Kochi and Thiruvananthapuram in Kerala, on January 13.

Both the hubs and the 41 locations, will have warehouses, including those owned by the government or private players like SpiceXpress, the cargo vertical of SpiceJet. These warehouses are equipped with cold storage, including freezers and coolers, to store the vaccines.

The third, and the last, leg

Another fleet of trucks will connect the last mile, taking the vaccines to clinics and hospitals.

Tamil Nadu government for instance, has made ready 10 warehouses, from where vaccines will be taken to 2,000 centres across the districts. Doctors, nurses and other healthcare professionals have been trained to administer doses.

In all, a total of 3 crore people will be given doses in the first phase.