After two failed attempts at cracking the grocery market, Zomato has acquired Blinkit in a last-ditch attempt to gain a foothold in the space. Meanwhile, the food delivery market in India is seen to be growing slower than earlier

'We claim for Zomato that building grocery business will work as a poison pill', said an investor note by HSBC earlier this month. Photo: Pixabay

There’s no better scenario for an acquirer when the target is desperate for the money.

In March this year, Moneycontrol was the first to report that Blinkit – the new avatar of Grofers after pivoting to 10-minute deliveries – was undertaking layoffs and shutting dark stores in order to control cash burn.

Although the global tech stock meltdown had made Zomato hesitant on another $500-million equity funding round in the grocery start-up, the food delivery major drew up an alternative plan. It agreed to throw a lifeline of $150 million in debt to the struggling portfolio company till things got better and all stakeholders could be brought on board for an acquisition.

Eventually, the acquisition happened as well. Last week, Zomato bought the quick commerce company in an all-stock deal valued at around $570 million.

But Zomato’s purchase of Blinkit is about much more than gobbling up a delivery peer at an opportune time. The company’s multiple in-house attempts to crack the grocery segment, the threat from rival Swiggy’s early success in the space and a potential stagnation in India’s food delivery sector — are three big enough reasons to buy a grocery company as well.

"In our recent conversations, we find investors broadly divided on Zomato’s strategy to acquire Blinkit and some even question the merit of foraying into grocery (hyperlocal)," said Yogesh Aggarwal and Abhishek Pathak of HSBC Global Research in a brokerage note earlier this month.

"We claim for Zomato that building grocery business will work as a “poison pill”. It would need reasonably high investment and hence cash burn and is likely to be a significant logistical challenge to execute as well, but still Zomato can’t afford not to do it," the note added. 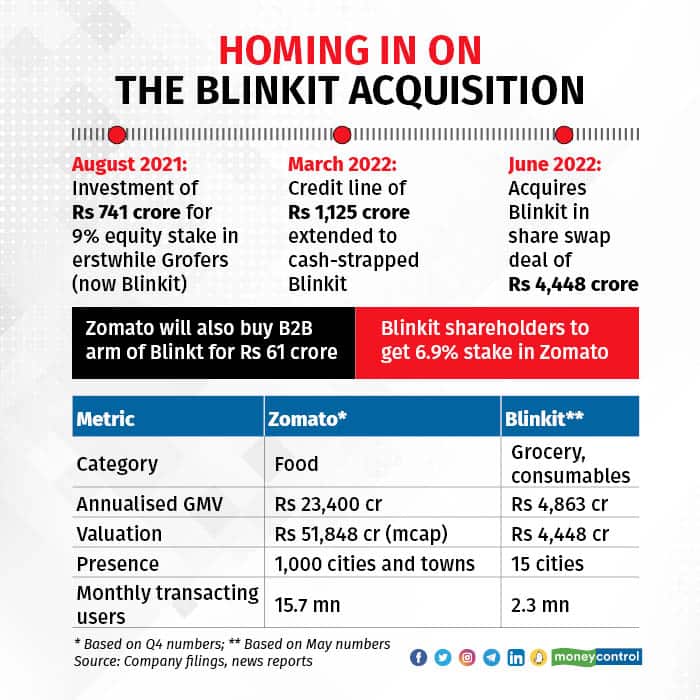 First things first. Not unlike its tech unicorn peers, Zomato tries out a lot of new things in adjacent markets.

In the past few years, it has taken a shot at selling nutraceuticals, streaming food-related content, venture funding restaurants, serving fast food in 10 minutes, and the like.

Most of those efforts were either wrapped up after lukewarm response from users or seem to have receded into distant memory.

Yet, grocery is one segment that Zomato doesn't want to forget even though it has delivered unforgiving results time and again.

The company's first brush with daily essentials came during the first wave of the COVID-19 pandemic when it had become the staple of the entire spectrum of e-commerce players, with non-essential deliveries being restricted by the government.

As the COVID-19 lockdowns were lifted, most of the players withdrew from grocery as they went back to their core businesses.

Around September 2020, Zomato users in several cities with less demand got notified on the app that the company was not going to deliver groceries anymore. The company said at the time that it would go back to focussing on its food delivery and dine-in businesses, but refrained from calling it a full-on exit.

But over the next six months or so, grocery start-ups promising quick deliveries in the US and Europe raised huge amounts of capital. Closer home, conglomerates like Tata and Reliance looked to double down on the segment through new investments. E-commerce majors Amazon and Flipkart had made inroads to grocery.

It was clear that the latest prized possession in hyperlocal deliveries was grocery.

Most importantly, the sore point for Zomato was that rival Swiggy had been slowly building up its grocery arsenal for a relatively longer time – through its acquisition of subscription-based grocery delivery start-up Supr Daily in 2018 and in-house efforts like Swiggy Stores (marketplace model) and Instamart (dark store model).

Zomato had a lot of catching up to do. Even as it prepared for a mega initial public offering (IPO), the food delivery company reportedly courted Grofers for a merger. When things did not materialise, it went ahead and renewed its grocery delivery efforts in July. But not before writing a $100 million cheque for Grofers in June.

In the next few months, Zomato realised that its marketplace model of grocery delivery was not working as third party stores could not keep up with updating catalogues in real time and managing inventory to fulfil customer orders. It finally shuttered the vertical in September and said that Grofers will be its sole grocery bet in the future.

While it is expected that tech companies invest into adjacencies with an eye on the future, Zomato’s announcement in November last year that it would invest $1 billion in e-commerce companies – with a large chunk going to quick commerce start-ups – raised many eyebrows.

A diagram in CEO and co-founder Deepinder Goyal’s blog was even more confusing. It said that over the next 3-5 years, Zomato would multiple ‘core’ businesses via M&As.

“Newly-listed companies seek to make the news and that is fine. In the ’90s, there used to be reports about which IT player was offering what for lunch in their canteens. But this level of shock and awe for a company that is loss-making does not bode well for any stakeholder,” a veteran analyst said at the time.

Apart from the Blinkit acquisition, Zomato has made at least six minority investments worth around $200 million – including $75 million in Shiprocket, $50 million each in Magicpin and Curefit – seeking to model itself after its investor InfoEdge.

“Why did not Zomato disclose these plans to diversify and divest when it raised more than a billion dollars in its IPO just a few few months back?” he wondered.

While the company’s losses widened by 50 percent to Rs 1,223 crore in FY22, there seemed to be a massive growth to back it up. Its revenue jumped 110 percent to Rs 4,192 crore in the same period.

However, that evades bigger problems. Its growth machine in food delivery seemed to be sputtering in the last few quarters – as the gross order value on the platform rose only 28 percent between the July quarter last year and March quarter this year.

According to the HSBC research note cited earlier, the food delivery sector in India itself is expected to grow at 17 percent CAGR over the next 10 years. With the duopoly of Zomato and Swiggy already controlling the market, their pies can’t grow any faster in the long term.

More importantly, Zomato’s average order value (AOV) has remained flat over the last one year, rising marginally by Re 1 from Rs 397 in FY21 to Rs 398 in FY22.

The company said that even in its top eight cities, the AOV has grown 3 percent during the period when food inflation in the country rose 7 percent.

“AOVs have dropped below Rs 400 and stagnated at Rs 390-levels across the food delivery sector. Earlier, Rs 400 was thought to be a breakeven point, but rising fuel prices have meant that the math has changed,” said an executive of a food delivery company who did not want to be named.

The thing about the food delivery sector is that it has too many moving parts – restaurants, delivery personnel, demographics – and a change in any one of the variables may change the entire equation.

Take, for instance, the profitability of operating in smaller cities and towns.

His views have changed since then. This is what he said a few weeks back:

“Currently, we are seeing that the contribution margin in a smaller city is lower than the larger cities, given the lower order values. As observed across various cities, this will change as the order density goes up, network effect kicks in, and we are then able to lower marketing costs as well as delivery costs.”

Experts say that things will get worse before they get better. As the global economy is expected to enter a phase of stagflation phase, it is only a matter of time before macroeconomic factors like inflation and slower growth deal a blow to discretionary spends like ordering out. 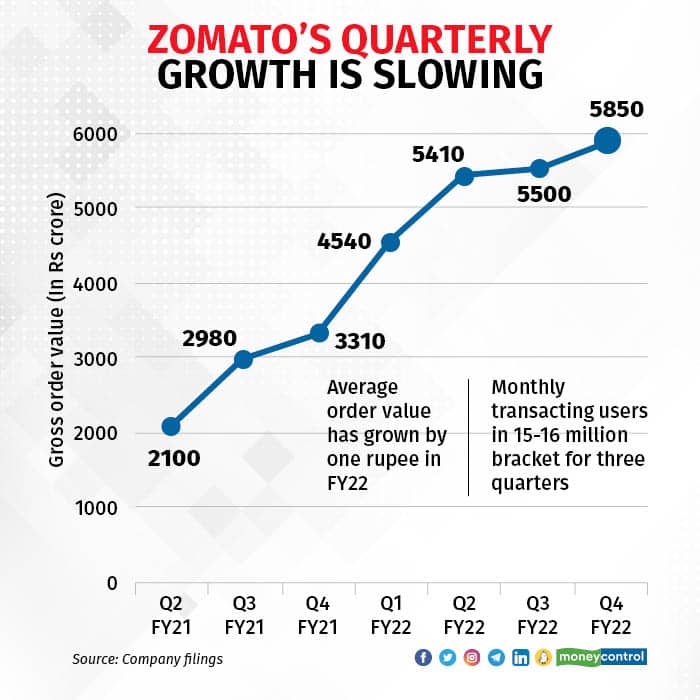 Can quick commerce be the saviour?

In the tech world, investors give a lot of importance to the size of the market that a company is operating in. With businesses being far away from returning any earnings to investors, a large market ensures that sales can keep growing at a fast tick.

And that is why hyperlocal delivery companies are graduating from just the grocery segment to a wider consumables market that includes lifestyle categories like personal care and homecare.

The thesis is: once you have acquired a customer through high frequency purchases such as bread and butter, it should not be very difficult to upsell soap and detergent at least a few times a month.

And for Zomato, this is an idea that is too large to ignore – expected to cross $1 trillion by 2025, according to e-commerce consultant Redseer.

This is so important for the foodtech company that it is willing to spend another $240 million on Blinkit over the next two years. So, what does Blinkit bring to the table?

Its monthly order book currently is Rs 403 crore, which is about a fifth of Zomato’s. The company operates around 400 dark stores in 15 cities. Each of these stores cater to users within a radius of 2 kilometres and currently send out 613 orders per day on an average. Even at a conservative estimate, Blinkit loses Rs 132 per order on an average.

Zomato said that it expects the haircut on a per order basis to come down significantly when the dark stores operate at their full capacity range of 2,000-3,500 orders per day -- or 3 to 6 times of current levels.

To achieve this, the company is exploring ways to cross-sell Blinkit's service on its own app that currently has 15.7 million monthly transacting users, compared to the acquisition's 2.3 million. Another way to reduce cash burn would be to share delivery fleets.

"The most important lever for Blinkit would be its ability to negotiate better margins with consumer packaged goods (CPG) companies -- and also get ad revenues from them -- when it hits a certain scale," said an analyst.

"However, it is also important to note that it would be stepping on the territory of the Amazons and Flipkarts who have much bigger war chests," he added.

Experts also pointed out the risk of getting wrangled in regulatory challenges as the dark store model may attract scrutiny once brick and mortar traders feel it is stealing their market share.

"There will certainly be issues if quick commerce dark stores are operating like the e-commerce marketplaces who strike deals with big brands and have the ultimate control on inventory through offshore-related parties," said an advocate at a Bengaluru-based law firm.