The government has managed to keep inflation under control and with the economy on a recovery path, one need not look at these corrections negatively and instead use it as opportunity to enter, says BP Singh of Pramerica Mutual Fund.

The bottom for the market will be determined by the way global bond yields behave says, BP Singh of Pramerica Mutual Fund in an interview to CNBC-TV18’s Latha Venkatesh and Sonia Shneoy.

The market currently is close to the bottom but will stabilise only once the bond yields globally stablise. So another 2-4 percent downside is possible, says Singh. However, he is upbeat on market going forward since the medium-term fundamentals look good, the valuations are not expensive and most of the earnings except those of IT and defensives were in line.

Moreover, the government has managed to keep inflation under control and with the economy on a recovery path, one need not look at these corrections negatively and instead use it as opportunity to enter.

The house is bullish on cyclicals, capital goods and private banks but would avoid defensives, says Singh

Below is the transcript of BP Singh's interview with Latha Venkatesh and Ekta Batra on CNBC-TV18.

Latha: What is your sense about the medium-term direction of the market? Have we put a bottom at 8,050 or 8,080 the current levels or do you think that we are spoiling for more losses? 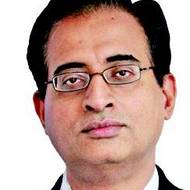 Now most of us when we analyse the market, we look at foreign institutional investors (FIIs) as one entity. FIIs must be categorised into multiple entities and there is one segment of it which is so called carry trade investors. When the bond yields fluctuate, they find that their cost goes up and they need to withdraw and that is exactly what happened in the market. So it was not the valuation driven market withdrawal, it is rather because the bond yields were going up.

Now at this point in time, we are not able to say whether it will be one-day, five days or seven days when the bond yields globally will stabilise but as and when it stabilises there will be in the stability in the Indian market and from there, people will start looking back onto the valuations and the fundamentals.

In the medium-term, we clearly see the fundamentals are good. Just before we entered into the result season, everybody was worried but now almost 60 percent the results are out, except for the IT sector and couple of so called defensive sectors most of the sectors you find the results particularly the margins were better than what we were expecting.

So medium-term to long-term this market is not set for a good performance, it just needs the stability on the global bond yields.

Latha: Do you think therefore that this is buy time and if it is, if you are only waiting for a few days or a week or two for volatility to settle down, do you think further downsides are not there for this market?

A: There could be another 2-4 percent downside but yes, we are almost close to the bottom because one - the confidence which investors will get from the Indian market and economy is over the last one year, the government has managed to control inflation and despite the fact that we had one of the worst hailstorms in the last three months, the food inflation has not risen again. That clearly indicates that inflation is in control and it is always the investors particularly on the economy who invest in the projects, they will come back the moment they get this particular confidence, which is almost over there.

So the economy is going to improve further, which means that we need not look into this 2-4 percent correction negatively, we would rather use this as an opportunity to get into the market.

Latha: What kind of sectors therefore?

A: When the inflation is stabilising and when the cost of funds are likely to come down in the economy it needs to be cyclicals, the commodity consumers, it needs to be the capital goods, the banking sector because now you have noticed that as the margins are expanding, lot many non performing assets (NPAs) will turn into the performing assets over the period of next 6-8 quarters. So therefore these are the sectors where the valuations are very attractive. That is where we have a good opportunity to generate return.

I will be avoiding the so called defensives and focus on the segment where the earning growth is going to surprise us on the positive side.

Latha: Would you have the appetite now for the likes of Punjab National Bank (PNB) and the Bank of Baroda (BoB)?

Latha: Would you now wait more on the midcaps and which ones?

A: Certainly we will have a higher weightage on the midcaps and again the same sectors as I mentioned that because now the road construction, the capital goods because we clearly see post monsoon major capex pick-up taking place in the economy. Margins have improved, the cost of capital is stabilising the commodity prices are down. So all the sectors, which are capital goods, engineering, the road construction, the finances whether non-banking finance companies (NBFCs) or private sector banks these are all the sectors in which we are focusing on the midcaps segment. The logistics, the transportations all those sectors included over here where we are buyers in the market.