The share of ULIPs in total new business annualised premium equivalent stood at 81 percent, while that of the protection business improved further to 8.6 percent

The insurer reported a 4 percent decline in total APE. This was mainly on the back of savings APE declining 9 percent YoY due to many factors including high base effect. However, the highlight of the period was very strong growth in protection APE, which doubled YoY.

The share of unit-linked insurance products (ULIPs) in total new business APE stood at 81 percent, while that of the protection business improved further to 8.6 percent (4.1 percent in 9M FY18). 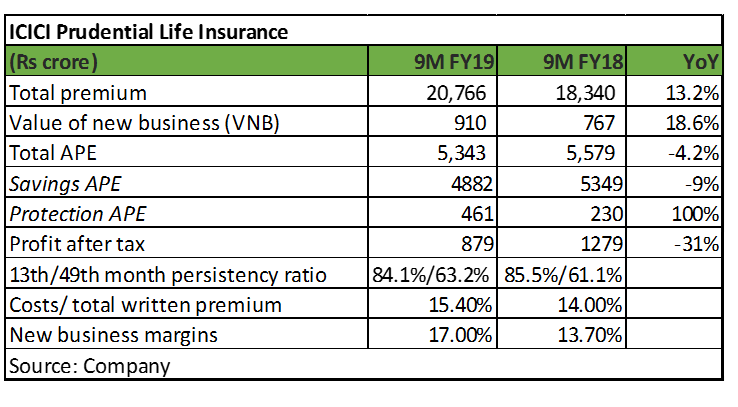 Total expenses (including commission) increased 19.4 percent on the back of increase in commission expenses as well as advertising and other expenses. As a result, the cost to total written premium ratio deteriorated to 15.4 percent compared to 14.10 percent last year.

In nutshell, ICICI Pru delivered a mixed performance on its 4P strategy articulated for future growth. While there was good progress on 2Ps (protection and persistency) in 9M FY19, the other 2Ps (premium growth and productivity) dragged overall performance.