Webinar :Join an expert panel for a webinar on Smart investments for a secure retirement January 28, 2021. Register now!
you are here: HomeNewsBusinessMoneycontrol Research

With increasing capacity utilisation across regions, cement prices are expected to firm up after the monsoons and should aid margin recovery, which appears to have bottomed out

The cement sector started FY19 on a strong note as most companies recorded healthy volume growth in Q1 FY19. On the cost front, companies are showing signs of minor improvement on a quarter-on-quarter (QoQ) basis as rising input pressures appear to have stabilised.

FY18 turned out to be a challenging year as the industry faced multiple disruptions in the form of a ban on sand mining and petcoke as well as rising fuel prices. However, the worst seems to be over as some of these issues appear to have been resolved and the industry is looking forward to improved capacity utilisation in coming years as demand environment (led by pick-up in infrastructure and housing) is expected to remain buoyant. We analyse the performance of some midcap cement companies to check which ones are worthy of investment at this current juncture.

Result snapshot
Sagar Cements reported a 15 percent year-on-year (YoY) growth in volumes owing to a strong demand in Andhra and Telangana. Sales growth stood at 6 percent as pricing remained muted in most operating regions. Operating margin improved to 13.3 percent as compared to 13.1 percent in Q4 FY18.

The company recently commissioned a 1.2 million grinding unit at Bayyavaram (Andhra Pradesh) in June and expects to generate operating efficiencies from the new unit on account of reduction in lead distance. Margin will be further enhanced after completion of 18 MW captive power plant, which is being set-up in Mattampally (Telangana).

Birla Corporation, which mainly operates in the central region, saw its revenue increase 14 percent to Rs 1,656 crore in Q1 FY19. This was driven by firm price realisations in the central belt, higher share of premium cement (MP Birla Perfect) as well as volume growth (increase of 8 percent YoY). Operating margin, however, contracted to 14.9 percent from 15.2 percent sequentially. The company incurred higher expenses on account of diesel prices as well as increase in lead distance.

Going forward, the company plans to expand Reliance Cement unit’s capacity by 3.9 million tonne along with a 40 MW captive power plant and plans to set-up a 10.6 MW WHRS (waste-heat recovery system) at Mukutban (Maharashtra). The board has approved this expansion and expects to incur a total expenditure of around Rs 2,450 crore on the same.

JK Lakshmi Cement’s revenue increased 3 percent to Rs 897 crore in Q4 FY18 due to improvement in realisations. Volumes remained flat during the quarter under review as the company reduced volumes in the low margin non-trade segment. Operating margin declined 110 bps on a sequential basis to 10.2 percent on higher inventory expenses. The company is setting up 20 MW captive power plant at Durg (Chhattisgarh) and 0.6 million tonne per annum (mtpa) grinding unit in Odisha and expects both facilities to come on-stream by FY9-end.

The company is building Line III at its Jayanthipuram plant (Andhra Pradesh) with a capacity of 1.5 million tonne. Besides this, expansion of grinding units in Andhra Pradesh, West Bengal and Odisha is also underway.

Margins bottoming out near current levels
Birla Corporation reported the highest realisation among the four companies as the central region (mainly Uttar Pradesh and Madhya Pradesh) appears to be in a sweet spot. Companies in the region are witnessing higher volumes along with improving realisations. 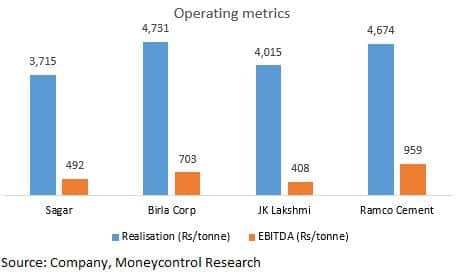 Industry players including JK Lakshmi have indicated that pricing remains muted in the northern region due to heightened competitive intensity.

In the southern region, Andhra Pradesh and Telangana are seeing strong pick-up in cement volumes, but prices have remained stable. Demand in Tamil Nadu is starting to recover after last year's contraction in volumes. Eastern as well as north eastern markets are witnessing strong cement demand and growing at faster pace than the rest of India as the government has initiated a number of infrastructure projects.

On the margin front, input pricing pressures (high petcoke costs and diesel expenses) appear to be stabilising around current levels as most companies are showing signs of steadiness on a sequential basis.

Sluggish construction activity during monsoon season has resulted in a minor price correction of 1.5-2 percent during July and August. With increasing capacity utilisation across regions, cement prices are expected to firm up after the monsoon and should aid margin recovery, which appears to have bottomed out.

Outlook and recommendationWith a pick-up in infrastructure development activities, demand for cement is expected to remain firm. Government spending on infrastructure and affordable housing should propel cement growth of 7-8 percent in the current fiscal.

Among midcap cement companies, Chennai-based Ramco Cements is best positioned to capture market growth. The company has a strong positioning in the southern and eastern regions. The management's intense focus on cost control measures resulted in superior margin and return ratios compared to other companies. The company derives majority of its revenue and profit from Tamil Nadu and Kerala. The current flood situation in Kerala might impact cement volumes for the next 2 quarters.  We suggest investors accumulate this stock on a correction (FY20e EV/EBITDA: 11 times) as this short term blip should be followed by a demand boost from reconstruction activity in the state.