Based on the open interest future percentage, here are the 49 stocks including Nifty Financial, Alembic Pharma, Crompton Greaves Consumer Electricals, Whirlpool, and HPCL, in which long unwinding was seen.

The recovery in last hour of trade helped the market close with moderate gains on June 28, backed by auto, metal, IT, select FMCG stocks and Reliance Industries. However, the gains were limited due to selling in private banking and financial services.

Positive global cues also supported the market. The BSE Sensex rose 16 points to 53,177, while the Nifty50 climbed 18 points to 15,850 and formed bullish candle on the daily charts.

"This pattern indicates an emergence of buying interest from the lows. After the display of lack of strength during upside breakout of significant resistance at 15,800 levels (resistance as per change in polarity), the market showed minor upside bounce from the dips and closed at the highs," said Nagaraj Shetti, Technical Research Analyst at HDFC Securities.

Having sustained above the important area of 15,750-15,800 levels, there is a possibility of further upside from here towards the next important resistance of 16,180 levels (opening downside gap of June 13), the market expert believes. "Immediate resistance is placed at 15,950 levels."

India VIX, which measures the expected volatility in the market, rose by 2.1 percent to 21.45 levels, discomforting bulls. Having volatility above 20 levels is a major concern for bulls and hence unless and until it falls and sustains below 20 levels the stability is unlikely, experts said.

Maximum Call open interest of 93.8 lakh contracts was seen at 16,000 strike, which will act as a crucial resistance level in the June series.

Maximum Put open interest of 80.07 lakh contracts was seen at 15,000 strike, which will act as a crucial support level in the June series. 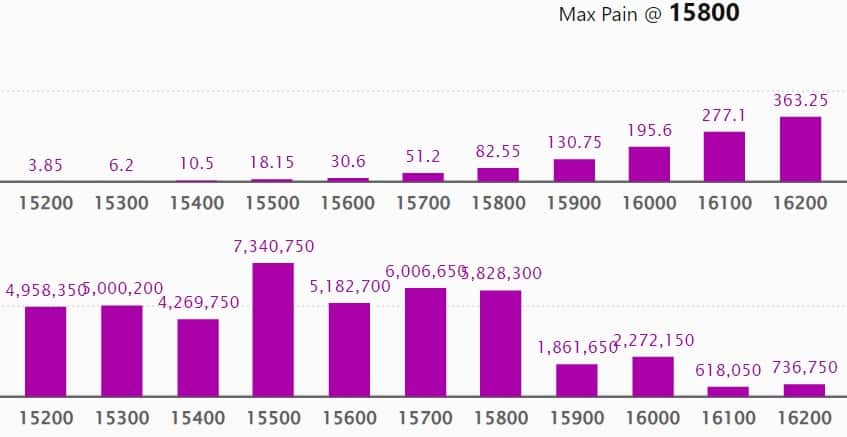 A high delivery percentage suggests that investors are showing interest in these stocks. The highest delivery was seen in ICICI Lombard General Insurance, Sun Pharma, Kotak Mahindra Bank, HDFC, and Colgate Palmolive, among others. An increase in open interest, along with an increase in price, mostly indicates a build-up of long positions. Based on the open interest future percentage, here are the top 10 stocks including Nifty, Ashok Leyland, TVS Motor Company, Mahindra & Mahindra, and ONGC, in which a long build-up was seen. 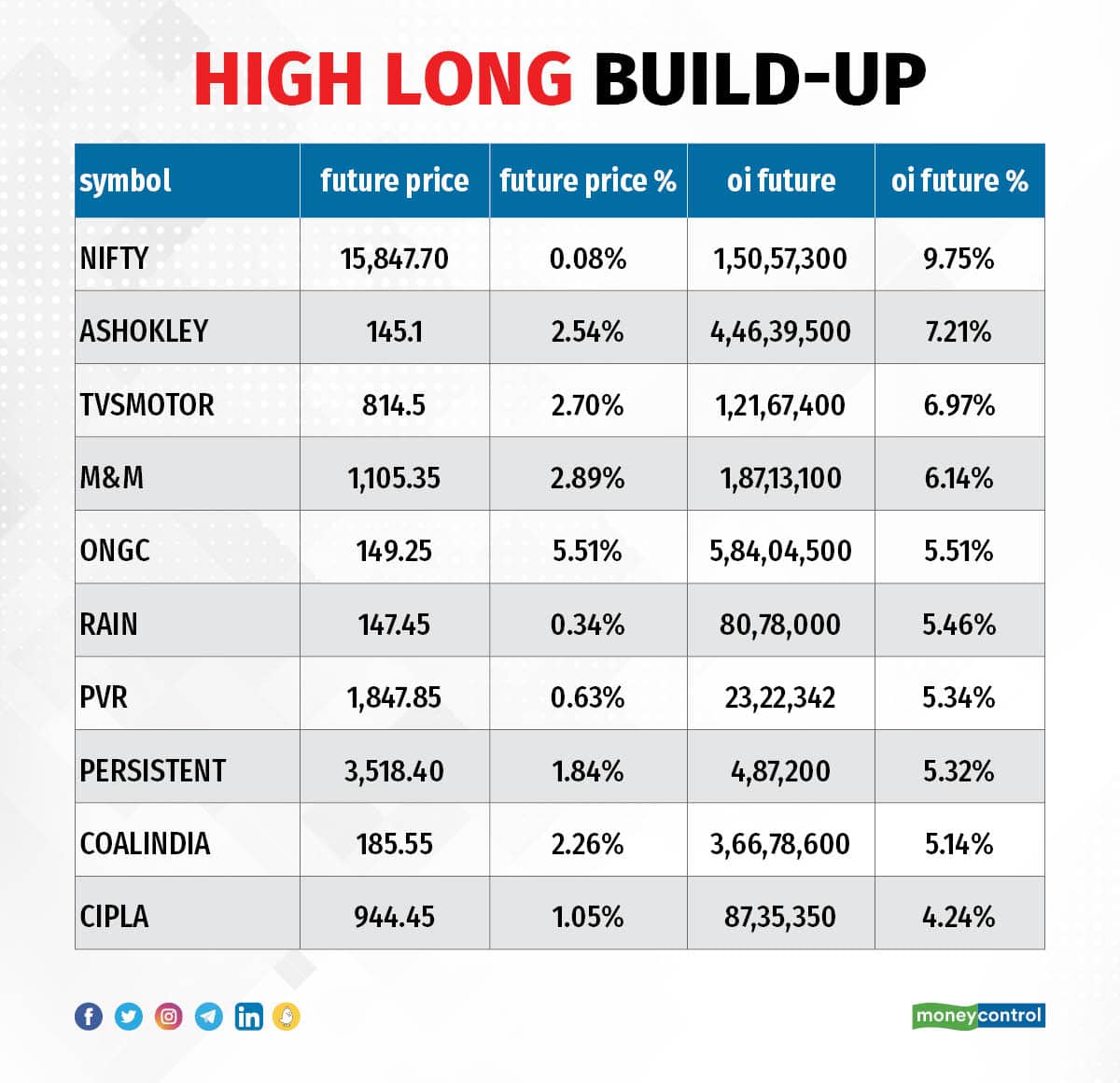 A decline in open interest, along with a decrease in price, mostly indicates a long unwinding. Based on the open interest future percentage, here are the top 10 stocks including Nifty Financial, Alembic Pharma, Crompton Greaves Consumer Electricals, Whirlpool, and HPCL, in which long unwinding was seen. An increase in open interest, along with a decrease in price, mostly indicates a build-up of short positions. Based on the open interest future percentage, here are the top 10 stocks including Chambal Fertilizers, Astral, NTPC, Polycab India, and ICICI Prudential Life Insurance, in which a short build-up was seen. A decrease in open interest, along with an increase in price, mostly indicates a short-covering. Based on the open interest future percentage, here are the top 10 stocks including Navin Fluorine International, Strides Pharma Science, Honeywell Automation, Hindustan Copper, and IRCTC, in which short-covering was seen. 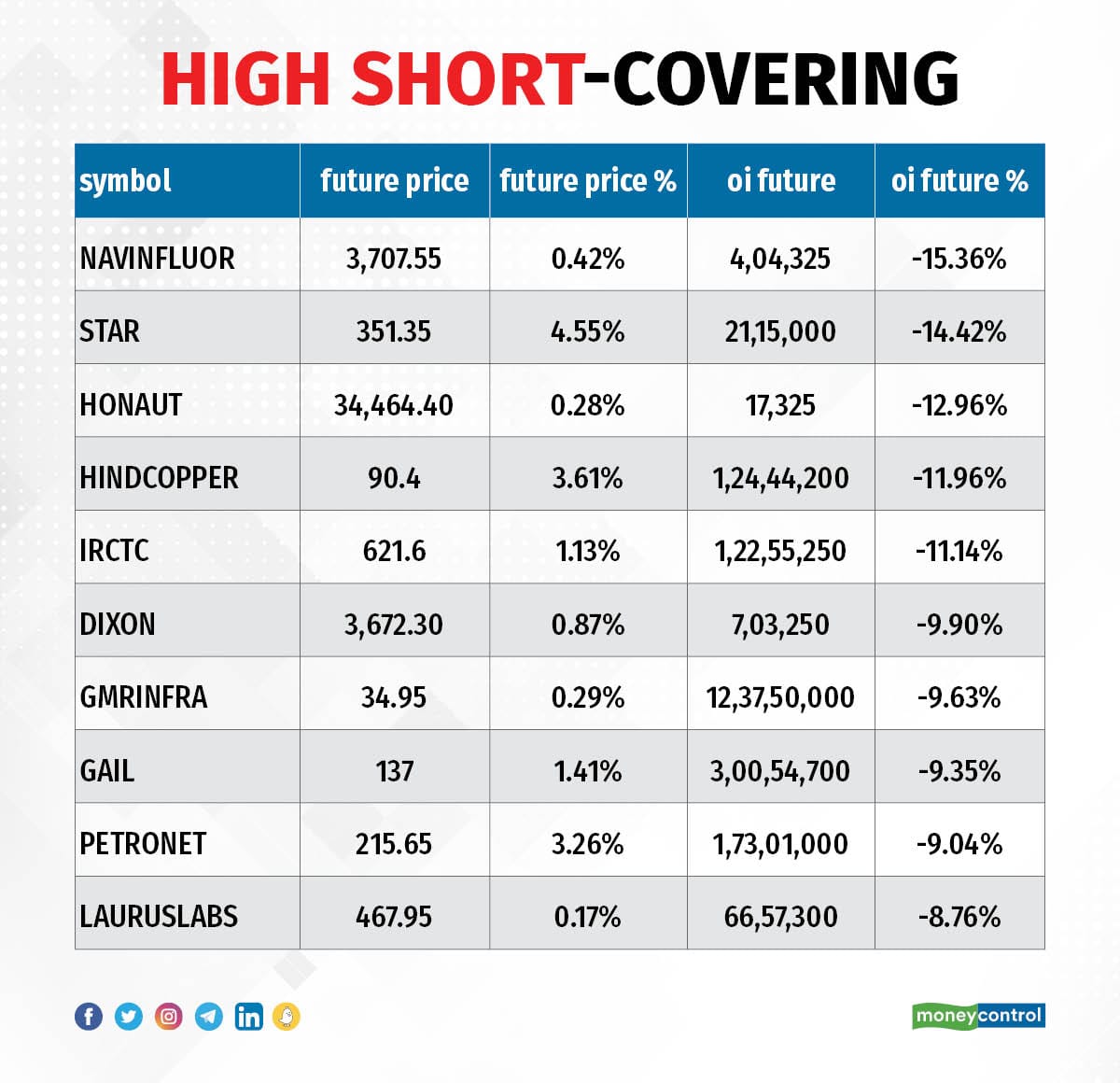 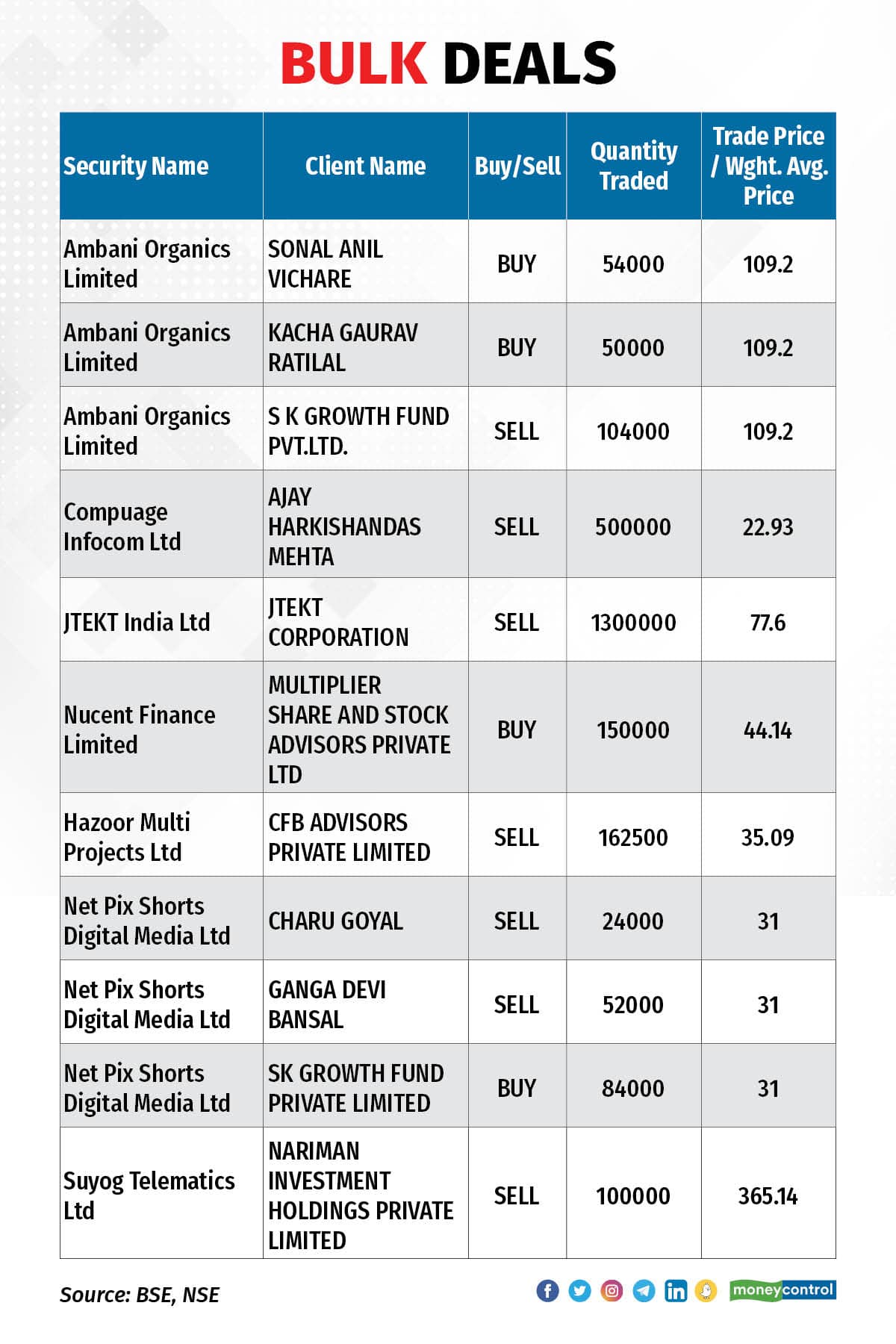 Mahindra & Mahindra: Officials of the company will meet several funds and investors in non-deal roadshow in New York.

Route Mobile: The company said the board has approved the proposal of buyback of equity shares of the company up to Rs 120 crore at a price of up to Rs 1,700 per share. With this, the size of maximum buyback shares would be 7.05 lakh equity shares, which is 1.12 percent of paid-up equity.

Orient Bell: The company announced on-time completion of two of projects involving capex of Rs 20 crore. GVT Tile plant capacity in Sikandrabad (UP) has increased by 0.7 million square metres (MSM) per annum and there was a conversion of Dora plant (Gujarat) from ceramic floor to vitrified floor with incremental volume potential being around 1.2 MSM per annum.

Jammu & Kashmir Bank: The bank said the board has approved raising of equity capital upto Rs 500 crore in one or more tranches, and another Rs 1,500 crore through debentures on a private placement basis.

Godawari Power & Ispat: The company has acquired 37.79 lakh equity shares of Alok Ferro Alloys (AFAL) at a fair value comprising of 78.96 percent of the paid-up capital of AFAL. AFAL is into ferro alloys with captive power generation, having operations in Raipur, Chhattisgarh only.

Shri Bajrang Alliance: The company has signed a contract with LULU Group International LLC, Abu Dhabi for supply of GOELD frozen food items in Middle East Markets (UAE, KSA etc.) and also through their Indian network. The purchase orders for the first 2 lots have been received.

Two stocks - Delta Corp and Sun TV Network - are under the NSE F&O ban for June 29. Securities in the ban period under the F&O segment include companies in which the security has crossed 95 percent of the market-wide position limit.