The market remained in a positive terrain throughout the session and settled with moderate gains on September 14, supported by select banks, auto, and IT stocks. However, the weakness in select FMCG, metals, HDFC twins and Bajaj twins capped upside.

"A small negative candle was formed on the daily chart, after a gap-up opening. Technically, this pattern signals a continuation of rangebound action in the market," said Nagaraj Shetti, Technical Research Analyst at HDFC Securities.

He further said the rangebound action continued in the market and this action could hint at a possibility of a minor upside breakout of sideways range in the short term. "The upper area of 17,500-17,600 is expected to be a crucial overhead resistance and one may expect profit booking emerging from the new highs. The immediate support is placed 17,260."

Maximum Call open interest of 17.38 lakh contracts was seen at 17500 strike, which will act as a crucial resistance level in the September series.

Maximum Put open interest of 40.87 lakh contracts was seen at 17000 strike, which will act as a crucial support level in the September series.

A decrease in open interest, along with an increase in price, mostly indicates a short-covering. Based on the open interest future percentage, here are the top 10 stocks in which short-covering was seen. Zee Entertainment Enterprises witnessed higher short covering, followed by LIC Housing Finance and Deepak Nitrite.

Krishna Institute of Medical Sciences: The company's officials will meet analysts and investors through a virtual conference call hosted by Motilal Oswal on September 15.

Power Finance Corporation: UBS Group AG increased stake in the company to 5.67 percent from 3.4 percent earler, through the rights issue. 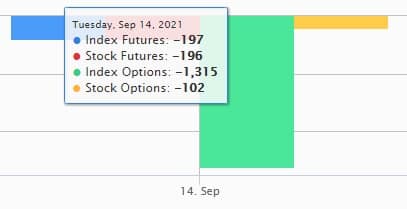 Eight stocks - Canara Bank, Escorts, Exide Industries, Vodafone Idea, IRCTC, LIC Housing Finance, NALCO and Sun TV Network - are under the F&O ban for September 15. Securities in the ban period under the F&O segment include companies in which the security has crossed 95 percent of the market-wide position limit.

Disclaimer: The views and investment tips expressed by investment expert on Moneycontrol.com are his own and not that of the website or its management. Moneycontrol.com advises users to check with certified experts before taking any investment decisions.
Sunil Shankar Matkar
Tags: #Market Cues #Market Edge #Nifty #Sensex #Trade Setup #video
first published: Sep 14, 2021 09:50 pm