Trade setup for today: Top 14 things to know before the opening bell

Based on the open interest future percentage, there were 105 stocks in which a short build-up was seen including Nifty Financial, Crompton Greaves Consumer Electricals, Eicher Motors, City Union Bank, and Mphasis.

The market started off the week on a negative note with the benchmark indices falling more than 1 percent, as the selling pressure was seen across sectors except pharma, on October 3.

"A long bear candle was formed on the daily chart, that has engulfed more than halfway mark of the previous long bull candle of Friday. Technically, this pattern indicates a lack of strength to sustain the upside bounce in the market and the crucial lower support of 16,750-16,800 levels could be tested again. This is a negative indication," Nagaraj Shetti, Technical Research Analyst at HDFC Securities said.

Hence, a decisive slide below 16,750 levels is likely to negate the bullish pattern created during Friday's upmove and that could eventually result in further strengthening of downside momentum in the market.

The broader markets were also in control of bears as the Nifty Midcap 100 index declined 1.25 percent and the Smallcap 100 index fell 0.66 percent. India VIX, which gauges the expected volatility in the market, also jumped 7 percent to 21.37 levels, making the bulls uncomfortable at Dalal Street.

The Nifty Bank was also under pressure, falling 602 points or 1.56 percent to 38,030 and formed a Bearish Harami candlestick pattern on the daily charts on October 3. The important pivot level, which will act as crucial support for the index, is placed at 37,781, followed by 37,533. On the upside, key resistance levels are placed at 38,460 and 38,890 levels.

Maximum Call open interest of 29.98 lakh contracts was seen at 18,000 strike, which will act as a crucial resistance level in the October series.

A high delivery percentage suggests that investors are showing interest in these stocks. The highest delivery was seen in Abbott India, ICICI Lombard General Insurance, HDFC, Hindustan Unilever, and HDFC AMC, among others. An increase in open interest, along with an increase in price, mostly indicates a build-up of long positions. Based on the open interest future percentage, below are the top 10 stocks in which a long build-up was seen. The list includes ONGC, Ipca Laboratories, Vodafone Idea, Torrent Pharma, and Zydus Lifesciences. 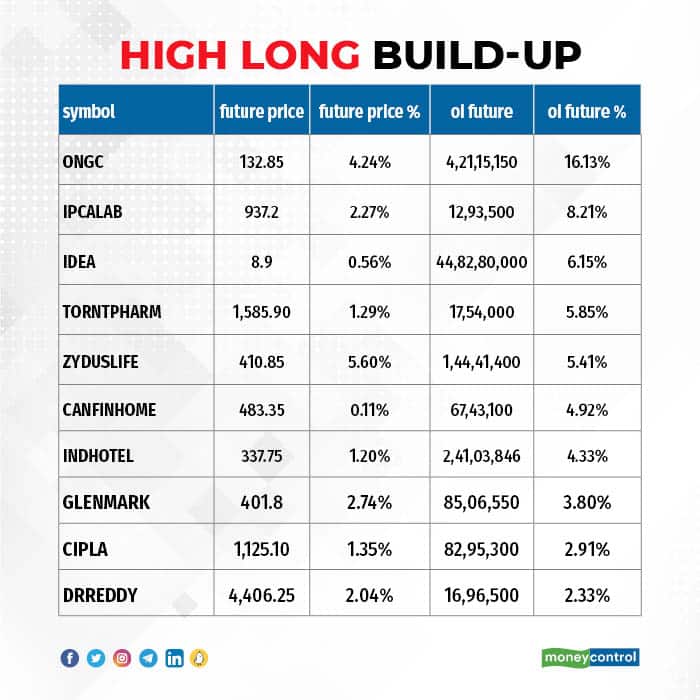 A decline in open interest, along with a decrease in price, mostly indicates a long unwinding. Based on the open interest future percentage, here are the top 10 stocks including Aditya Birla Fashion & Retail, TVS Motor, JK Cement, Chambal Fertilizers, and Bosch, in which long unwinding was seen. 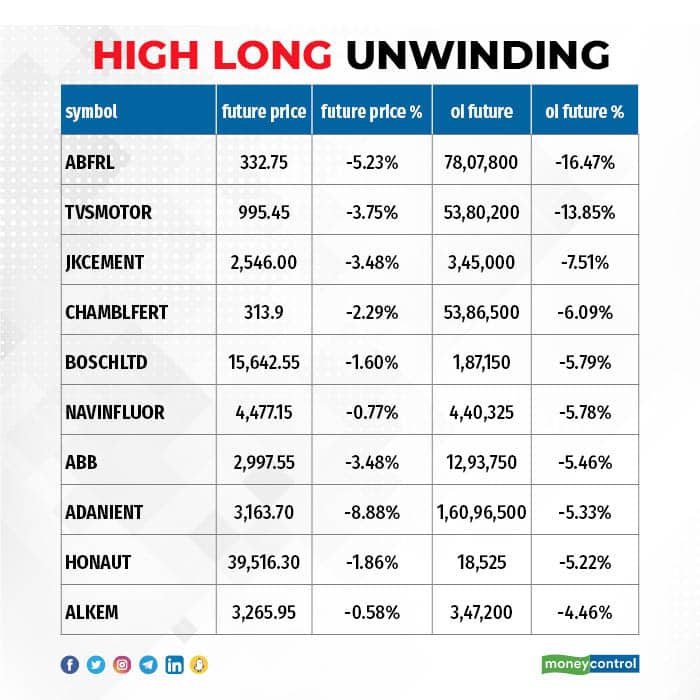 An increase in open interest, along with a decrease in price, mostly indicates a build-up of short positions. Based on the open interest future percentage, here are the top 10 stocks in which a short build-up was seen. The list includes Nifty Financial, Crompton Greaves Consumer Electricals, Eicher Motors, City Union Bank, and Mphasis. A decrease in open interest, along with an increase in price, mostly indicates a short-covering. Based on the open interest future percentage, here are the 10 stocks, in which short-covering was seen. The list includes MCX India, Deepak Nitrite, BHEL, Granules India, and Coal India. 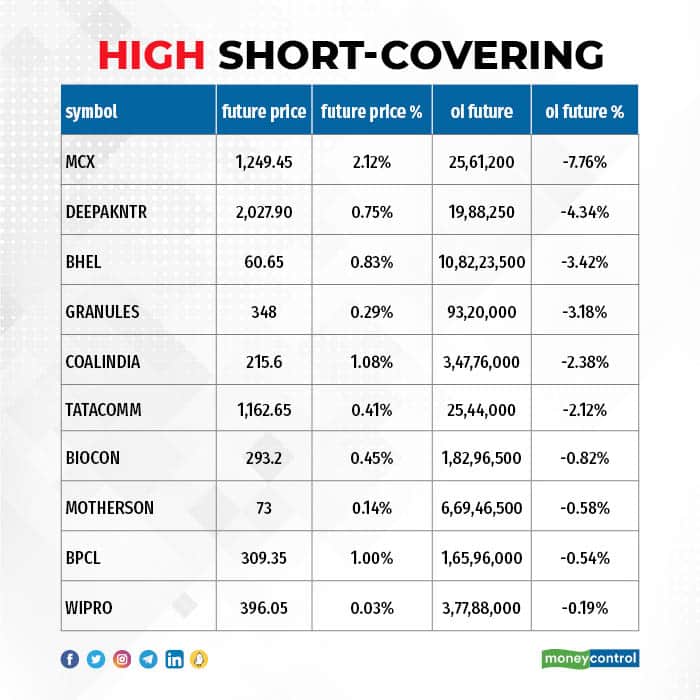 Housing Development Finance Corporation: HDFC said loans assigned in Q2FY23 stood at Rs 9,145 crore, up from Rs 7,132 crore in same period last year. All the loans assigned during the quarter were to HDFC Bank. Gross income from dividend for Q2 came in at Rs 1,360 crore and the profit on sale of investments was nil for the quarter.

KEC International: The infrastructure EPC company has secured new orders of Rs 1,407 crore across segments. The transmission and distribution segment received orders from Middle East, while the railways business has bagged an order for signaling & telecommunication works. Its year-to-date order intake now stands at Rs 8,400 crore.

Dilip Buildcon: The road construction company through its joint venture RBL-DBL has received letter of acceptance (LOA) for its Surat Metro Rail Project in Gujarat. The said order is worth Rs 1,061 crore.

Vedanta: The company said its alumina production at Lanjigarh refinery decreased by 11% YoY to 4.54 lakh tonnes due to scheduled maintenance, and at Zinc India, reported highest-ever second quarter mined metal production at 2.55 lakh tonnes, up 3 percent YoY, driven by better grades and improved mill recoveries. In the steel segment, its total saleable production increased by 11% YoY to 3.25 lakh tonnes on account of completion of debottlenecking activities in Q1FY23.

Avenue Supermarts: The D-Mart operator announced standalone revenue for the quarter ended September 2022 at Rs 10,384.66 crore, up significantly by 36% from Rs 7,649.64 crore in same period last year. The total number of stores as of September 2022 stood at 302.

The National Stock Exchange has not added any stock under its F&O ban list for October 4. Securities thus banned under the F&O segment include companies where derivative contracts have crossed 95 percent of the market-wide position limit.

Disclaimer: The views and investment tips expressed by investment experts on Moneycontrol.com are their own and not those of the website or its management. Moneycontrol.com advises users to check with certified experts before taking any investment decisions.
Sunil Shankar Matkar
Tags: #Market Cues #Market Edge #Nifty #Sensex #Trade Setup
first published: Oct 3, 2022 10:36 pm