The RBI will manage rupee, as always

The most obvious reason for RBI intervention is that a weakening exchange rate increases the country’s import burden. The central bank of a net importing country is justified in defending its currency during bouts of depreciation.

The Reserve Bank of India (RBI) has been found yet again to be defending the Indian rupee by intervening in the forex market, in the process risking depletion of its foreign exchange reserves.

The central bank is giving an easy exit to foreign investors looking to flee India.

Why is the RBI unwilling to let the exchange rate be?

The most obvious reason is that a weakening exchange rate increases the country’s import burden. The central bank of a net importing country is justified in defending its currency during bouts of depreciation.

In its monetary policy report for April, the RBI noted that a 5 percent depreciation of the rupee from its baseline assumption would add 20 basis points to already elevated inflation. One basis point is one-hundredth of a percentage point.

The RBI has assumed the rupee to average 76 per dollar in FY23. But the Indian currency is down 1.3 percent from the central bank’s base case assumption. While It may seem that the RBI can afford to leave the rupee alone, for now, there are risks. “The exchange rate pass-through to inflation can, however, be non-linear and time-varying in an environment of high volatility in financial and commodity markets,” the report stated.

This means that even though the exchange rate’s depreciation may be less than feared by the RBI, its impact on inflation could be more complicated.

It pays to go back to a working paper authored by Deputy Governor Michael Patra in March 2018. In that, the study found that due to the non-linear impact of the exchange rate depreciation, a 1 percent fall in the rupee can add 15 basis points to headline inflation and the impact will begin within five months.

The RBI is mandated to keep inflation within a 2-6 percent flexible inflation band prescribed by law. The central bank has to take all measures to achieve this, failing which it has to answer to the government.

Retail inflation is expected to have surged to 7.5 percent in April, according to economists. At the same time, inflation is set to peak and the statistical base effect would bring down headline inflation in the coming months.

The current depreciation of the rupee is bound to lift headline inflation at a point in time when the base effect and monetary measures would bring it down. Former governor D. Subbarao has warned that the RBI risks failing in inflation targeting by September.

This is something the RBI cannot afford. Inflation targeting should not be a hostage to exchange rate pass-through. While global oil prices are not in the central bank’s control, the exchange rate is. 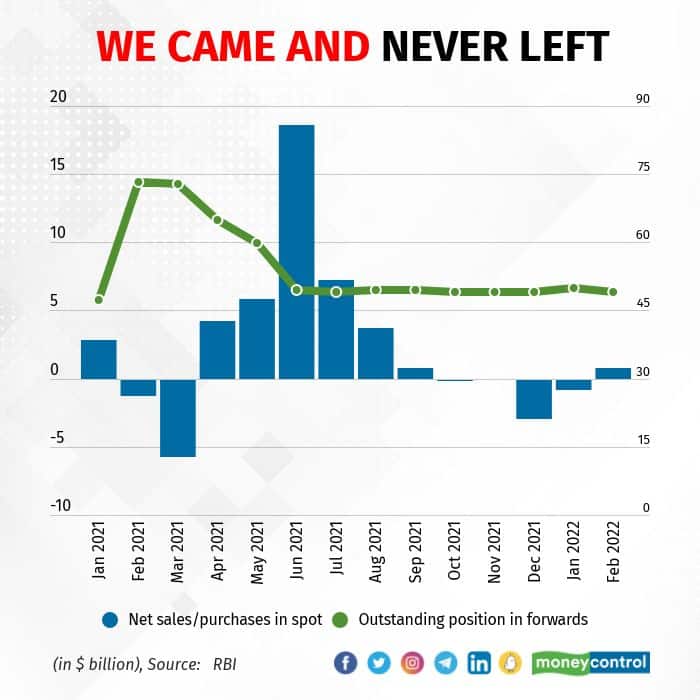 The RBI’s intervention is a given but it may not be stringent. “The RBI cannot change the direction of the exchange rate. So they would intervene only to deal with volatility,” said D.K. Joshi, chief economist at Crisil Ltd.

Joshi added that the cost of intervention is high but leaving the exchange rate on its own won’t exactly bring dividends on the export front. “Global demand determines export performance more than the exchange rate does,” he added.

Further, the RBI has plenty of dilemmas in exchange rate intervention. As noted earlier in this story, the central bank risks depletion of forex reserves and by extension a fall in the import cover through intervention.

The RBI’s best bet is to keep tightening its policy with rate hikes. It has already done an out-of-turn hike of 40 bps earlier this month. As such, economists expect a series of hikes in the coming policy meetings. Markets are pricing in the same too.

Policy rate hikes reduce the interest rate differential between India and the US. True, this may not lure dollars into the domestic market immediately. But it does reduce the odds of outflows somewhat. At the same time, policy rate hikes are an antidote to domestic inflationary expectations. Inflation is a common enemy to growth, exchange rate and consumption demand that the economy depends on. Addressing price pressures would give the RBI multiple rewards in the medium term.