With the easing of global worries, cooling off of volatility and government's continuous focus on bringing economy back on track, positive momentum is expected to continue in coming days

The market staged a strong performance in the last three consecutive sessions and helped benchmark indices post 1.4 percent gains for the week that ended on December 13.

The announcement of phase one trade deal by US and China, and easing Brexit worries after the emphatic victory of Boris Johnson's conservative party in UK's general election lifted sentiment.

Also, reports that ArcelorMittal started has paying money to lenders in Essar Steel case brought cheer to the markets. Nifty Auto,Bank and Metal indices gained 2-3.6 percent while the Nifty Midcap index was up 1.2 percent, but smallcaps lost 0.8 percent during the week.

With the easing of global worries, the cooling off of volatility and the government's continuous focus on bringing economy back on track, the positive momentum is expected to continue in coming days despite weak domestic economic data points, followed by some consolidation, say experts.

"We expect the market to continue to move higher as the momentum is favoring the bulls while easing global sentiments is a much bigger boost for investors at this moment. Nifty still has a very important resistance at 12,200 - 12,250 on a spot basis that needs to be taken out to make sure the trend sustains," Mustafa Nadeem, CEO, Epic Research told Moneycontrol.

Vinod Nair, Head of Research at Geojit Financial Services said falling interest rate, easy monetary policy across the globe and liquidity would limit the downside for the market. "With positive momentum extending to mid and small caps as well, we believe this potential change in risk appetite may help investors to look beyond the polarised market," he said.

After Boris Johnson wins the UK elections by a majority, markets will keenly await the verdict on Brexit as the fate of Indian companies that have an exposure to the EU lies on this deal, Jimeet Modi of SAMCO Securities & StockNote said.

The 38th Goods and Services Tax (GST) Council meeting will be held on December 18, and will be chaired by Finance Minister Nirmala Sitharaman. The Council is expected to deliberate on an alternative mechanism for the compensation cess, and look at ways to boost revenue from indirect taxes.

Compensation to the states has been increasing 'significantly' and is unlikely to be met through compensation cess collections, a senior government official told Moneycontrol.

Some states said that they aren't receiving their share of the compensation cess from the central government, which was impacting their finances.

The Council can also think of raising the GST rate and slabs, the report said. Currently there are four slabs - 5 percent, 12 percent, 18 percent and 28 percent - under the GST regime.

Resolution of cases under IBC

Among sectors, the biggest gainer in the last week was Nifty PSU Bank index that rallied 4.5 percent. The likely payment to lenders from Arcelor Mittal in the Essar Steel insolvency resolution case was the key reason behind the rally.

Banking executives, who requested anonymity, told CNBC-TV18 that world's biggest steelmaker ArcelorMittal, on December 13, transferred about Rs 40,000 crore to the current account of Essar Steel's lead banker, State Bank of India to take over the debt-ridden Essar Steel under the new Insolvency and Bankruptcy Code.

Hence, all eyes are December 16 when all creditors' dues will be settled by the top lender. SBI, IDBI Bank, Canara Bank, Bank of Baroda, PNB, Union Bank, Bank of India, Corporation Bank, Syndicate Bank, UCO Bank, Central Bank, Allahabad Bank and ICICI Bank could continue to be in focus on Monday.

Reports also said that Ruchi Soya and Bhushan Power cases could also be solved by the end of December. Hence, lenders that have exposure to these cases could be in action.

The much awaited phase one trade deal between the world's largest economies United States and China was finally announced on December 13. The deal, which is yet to ratified by both countries, includes an increase in agricultural purchases, some tariff relief etc.

The US decided to cancel its next round of tariffs on Chinese goods that were set to be effective on December 15. China also said it would consider cancellation of retaliatory tariffs set to be implemented on same day.

According to the deal, the US plans to remove tariffs on Chinese goods in phases, but when they will do so is still unclear as the phase one trade deal agreement still needs to go through legal procedures.

US Trade Representative Robert Lighthizer said the US and China aim to sign the agreement in January in Washington. With this, tensions related to more than 16-month long trade war eased, but globally, investors will still closely watch the trade developments as the deal is yet to be signed.

The data on Wholesale Price Index (WPI) inflation for November will be released on Monday. Wholesale inflation in October eased to -0.16 percent (against 0.33 percent in September), the lowest level in more than three years due to a fall in the prices of fuel and manufactured products.

The Reserve Bank of India on December 19, will release the minutes of monetary policy meeting held on December 5, where the Monetary Policy Committee paused the repo rate cut on rising retail inflation, but its kept stance accommodative.

The caution shown could be due to slowing economic growth despite several government measures and uncertainty over US-China trade deal which finally announced on December 13, but is yet to be signed by both countries.

But after the holiday period of last two weeks of December, FII flows are expected to pick up, considering the positive global sentiment, and a continuation of stimulus by central banks, which could come in emerging markets, including India, through ETFs.

"FII flows have remained quite volatile in recent days. We can expect the continuance of some inflows back into Indian markets with global sentiments cooling down," Amit Gupta of ICICI Direct said.

Prince Pipes and Fittings will launch its initial public offering on December 18 where it expects to raise Rs 500 crore through this offer that consists of a fresh issue and offer for sale of Rs 250 crore each.

The company, after consultation with merchant bankers, fixed the IPO price band at Rs 177-178 per share. The second public issue of this month will close on December 20.

Prince Pipes, a leading polymer pipes and fittings manufacturers in India, has six manufacturing facilities — two in Dadra and Nagar Haveli and one each in Uttarakhand, Maharashtra, Tamil Nadu and Rajasthan.

The Nifty50 closed the week, and Friday a percent higher, forming bullish candle on the daily and weekly scales.

"The present upside momentum in the market could continue to 12,150-12,200 levels until the end of this month, but the emergence of selling pressure from around the all-time highs can’t be ruled out," Nagaraj Shetti, Technical analyst, HDFC Securities, told Moneycontrol.

"Technically, the market has confidently crossed the level of 12,080, which is positive for the market and the strategy should be to trade long on dips between 12,000 and 11,950. On the downside, the 11,900 level would be the ultimate support for the market," Shrikant Chouhan, Senior Vice-President, Equity Technical Research, Kotak Securities said.

The Options data suggests a wider trading range for the Nifty at levels between 11,900 to 12,200 for the coming weeks.

"The Nifty has been consolidating around 12,000, and may pick up in the coming days. Put writers are active at 12,000 strike since the beginning of the series. There were days when the Nifty declined below 12,000, but this Put strike did not witness closure. The Nifty support in the coming week is placed at 11,950," Amit Gupta of ICICI Direct said.

India VIX fell by 0.37 percent to 13.30 levels, the lowest closing of the volatility index since July.

The lower volatility could continue to provide the support to the index to attract fresh buying interest, which could take the Nifty higher in coming days, experts feel.

Here are corporate actions of companies taking place in the coming week: 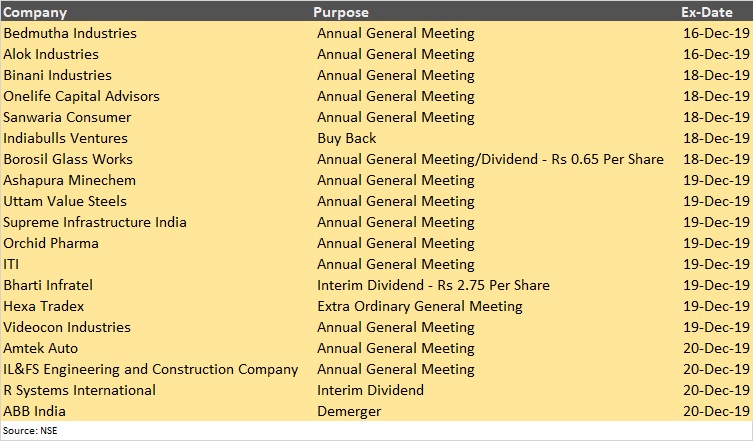 Apart from Brexit and US-China trade deal, here are other key global data points to watch out for in coming week: