Harshad Mehta scam: 10 key points of the scam that jolted India in 1992

How did the ‘Big Bull’ manage to script a scam to the tune of Rs 4,000 crore? What made banks lend him huge sums of money? How did he put the stock market on steroids and take it on a dizzying ride, lifting some stocks by more than 4,000%? And how did it all end? Read on to find out

In the history of scams in India, the year 1992 holds a special place. That year, for the first time, the country saw an ingenious machination of its stock market.

Involving a fraud of around Rs 4,000 crore, the ‘Securities Scam’, as it came to be known, is still one of the biggest frauds perpetrated on the Indian stock market to date.

It was a systematic fraud that involved bank receipts and stamp papers, and that eventually led the stock market to crash. The scam shook the country and ultimately changed the rules of the game on Dalal Street.

Here are 10 key points about the Harshad Mehta scam of 1992:

1. Harshad Mehta, a registered and well-known broker, manipulated the Bombay Stock Exchange (BSE) along with his partners by taking advantage of loopholes in the banking system.

2. Mehta allegedly colluded with bank employees to get fake bank receipts (BRs) issued. He used these BRs to get other banks to lend him money under the impression that they were lending against government securities (G-Secs).

3. This amount was then put into the stock market to juice up share prices by up to a staggering 4,400 percent. Mehta then sold these shares at a significant profit and the principal amount was returned to the banks.

4. In all, Mehta defrauded the banks of nearly Rs 4,000 crore. Later, when his mode of operation in the stock market was discovered and exposed, banks realised that they were in possession of fake BRs holding no value. 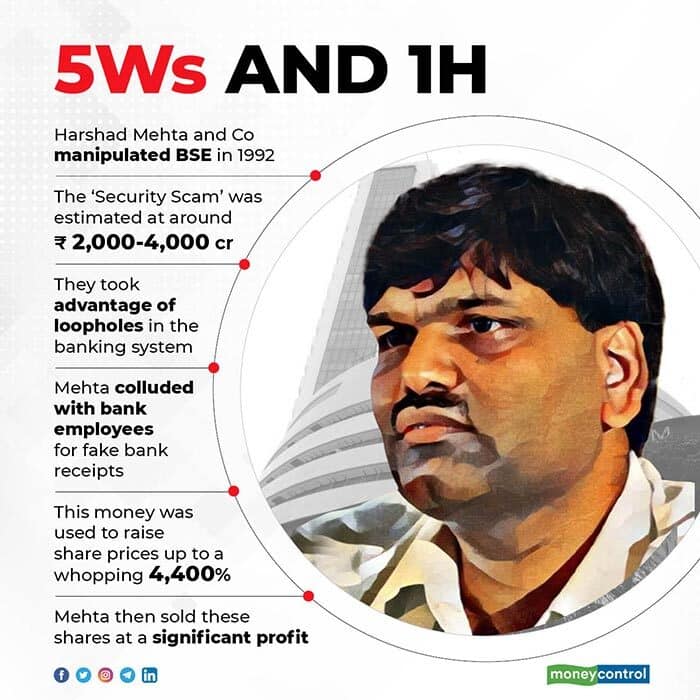 6. As the markets continued touching new highs, people started looking up to him as the ‘Big Bull’ and started buying the stocks that he invested in. Many retail investors ended up investing substantial amounts in stocks.

7. After the scam came to light, the tax department conducted a raid on the Mehtas on February 28, 1992. Several documents and share certificates were seized.

On June 4, 1992, the CBI carried out a search on the Mehtas. Subsequently, the tax return filed by Harshad Mehta for the assessment year 1992-93 was rejected. Mehta was imprisoned in 1992.

8. The Reserve Bank of India formed Janakiraman Committee in 1992 to provide a comprehensive picture of the scam. A joint parliamentary committee (JPC) was also constituted in 1993 to probe the irregularities in securities and banking transactions in the aftermath of the Haeshad Mehta scam.

9. Mehta was convicted by both the Bombay High Court and the Supreme Court and charged with 74 criminal offences. His legal battles dragged on until 2001, when he passed away in jail from a cardiac arrest. He was 47.

The Indian stock market has come a long way since the scam. Over the years, there have been other stock market scams that have cleaned out investors and left regulatory bodies red-faced. But Mehta was the one who started it all. The events that he scripted continue to serve as a reminder to both investors and regulators to remain vigilant at all times.