Titan's EBIT from the jewellery business is ten times the EBIT from watches plus eyewear business put together, said Udayan Mukherjee.

Udayan Mukherjee of CNBC-TV18 on the channel today, besides the way forward for the market expressed his views on the capital goods sector that is seeing order book accretion after a long time, the Yes Bank issue, the Zetia impact on Glenmark Pharma and Titan.

According to him, the market seems to be consolidating but at the higher-end of the trading range and this could be because of the asset allocation switch which is on, rather than earnings confidence switch which street has been waiting for.

“Market is not really correcting, and a 100-150 point correction is no real correction after the stellar run it has had,” says Mukherjee. So one is still waiting for that correction, which could give better deployment opportunities. The medium-term looks good for the market but in the short-term it is better if rests a bit or there is a bit of a pullback, he adds.

The stock market hanged Yes Bank on Friday after it learnt that its gross NPAs (non-performing assets) as of March 31, 2016 ought to have been Rs 4,925 crore or 5 percent of the book, and not Rs 749 crore or 0.76 percent as the bank had reported.

However, Mukherjee feels the impact of this on the Yes Bank stock may not linger for more than 48 hours. One rarely finds a critic for private banks, he adds. 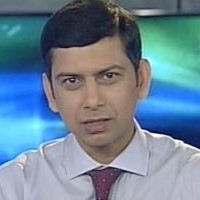 With regards to the order book accretion seen for capital goods players like Siemens, ABB, he says most of the orders are currently coming from the government, adding that one hasn't seen a full-fledged recovery in capex cycle yet.

For Glenmark, he thinks valuations is not a question but the Zetia Development will raise questions on growth for the company in FY18 and FY19.

Titan a few years back was a consumer company with large presence in watches but now it has become a pure jewellery stock. “Titan's EBIT from the jewellery business is ten times the EBIT from watches plus eyewear business put together,” he says.

So now one needs to see whether it is a 10 percent margin jewellery company or a 7-8 percent margin company – on that hinges the kind of valuation multiple one wants to give the company. “If it is 7.5-8% margin jewellery stock, then it does not deserve the 40 PE multiple the street is giving it,” says Mukherjee, adding that however if it is a 10 percent plus margin company then one could justify these valuations.

It would be prudent to be a little cautious on the stock at these kinds of valuations, he believes.