It's raining jobs, and more jobs in the Indian tech sector

Indian IT services, startups and other product companies are hiring 70,000 people across just six roles, offering an average salary hike of 50-60 percent

In a stressed-out pandemic period, tech jobs are offering the much-needed cushion.

Large information technology (IT) services firms and start-ups are urgently seeking talent as the demand for products and services continue to increase with enterprises moving to digital.

There are hundreds of jobs open across key technology firms, who are willing to pay a premium to retain and hire talents.

According to a report shared by specialized staffing firm Xpheno, Indian IT services, start-ups and other product companies are hiring 70,000 people across just six roles and offering an average hike of 50-60 percent.

The candidates got an average hike of 20-25 percent last year for experience ranging from three to eight years.

The number of job openings has exploded over the last few months after the conservative approach companies took last year when the COVID-19 outbreak happened.

This follows the broader trend of enterprises world over moving to digital.

“Technology is often at the forefront of economic recovery, but especially so now, as the pandemic has precipitated structural changes across industries and challenged established ways of working," Rishad Premji, Chairman of Wipro, said in a letter to shareholders in the company's FY21 annual report. 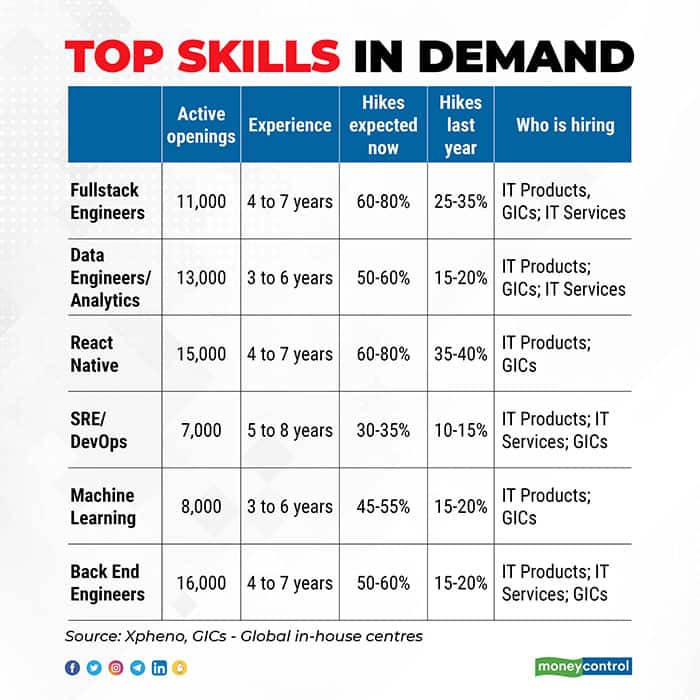 This shift, he said, would result in huge demand for tech talents that would outweigh the supply and would be a key factor in driving growth.

What Premji had predicted is already happening with companies finding it difficult to find talent to cater to the growing needs.

During the recent earnings call, Julie Sweet, Chief Executive Officer (CEO), said that the demand for technology professionals is at an all-time high and employee attrition at Accenture is back to pre-pandemic levels.

“It is not the highest the company has seen. It is an industry phenomenon and we are comfortable,” Sweet said during the call.

The company is also witnessing an increase in wages, depending on skills and geographies.

This is resulting in a war for talents, which was first flagged by Salil Parekh, CEO, Infosys in early March.

Cognizant CEO Brian Humphries during the recent earnings call said that the company lost out on projects since it could not hire the talents needed. What are companies doing?

There are two things that the companies are doing - offering hikes and building in-house talents. Hikes are in the offing to retain talents. TCS, Infosys, and Wipro have already announced a second round of raises shortly after they had rolled out the first.

TCS gave out hikes in April, just six months after employees got their salary increments in October 2020.

Infosys and Wipro too have announced salary increases effective July and September respectively this year. As has Accenture, which has also promoted a record 1.17 lakh employees, of which 1,200 were to the managing director level.

In an earlier interaction, HCL Tech’s Chief Human Resources Officer, VV Apparao, said that the company will now focus on hiring more freshers than lateral entries in the coming years. 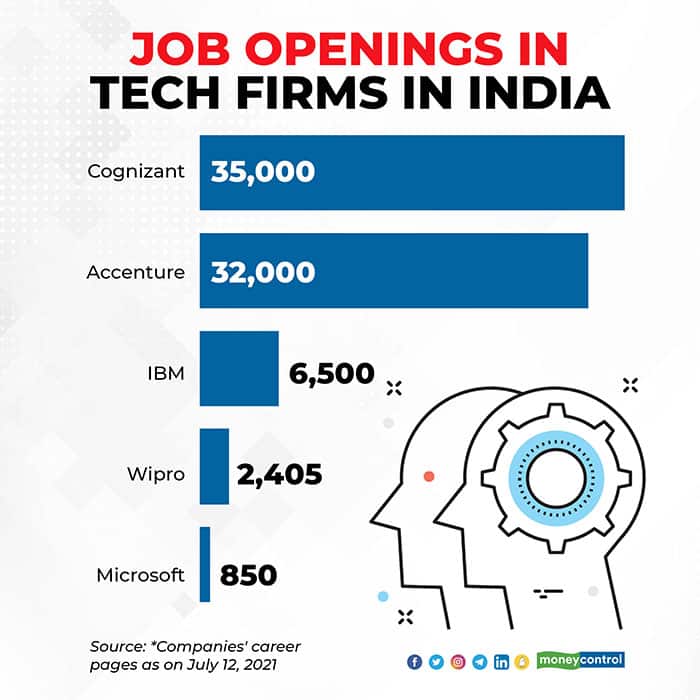 In FY21, the company hired 40 percent freshers and 60 percent laterals. It is looking to increase it to more than 70 percent in the next few years and build upon in-house talent, especially in new age skills.