Access Selected Content from
Financial Times on Moneycontrol Pro
Upcoming Webinar :Register now for 'ULIP as an investment during economic recovery' powered by Bajaj Allianz
you are here: HomeNewsBusinessIPO

The IPO of Metropolis Healthcare (MPH) provides an opportunity to invest in one of the leading pathology labs chains in India. The company has rapidly growing presence pan India and is positioned to benefit from the growing health awareness and spend.

The issue is an offer for sale and no proceeds would flow into the company. Dr Sushil Shah from the promoter family will sell 62.7 lakh shares, and investor CA Lotus Investments (a subsidiary of US-based private equity firm Carlyle Group) will offload 74.1 lakh shares. 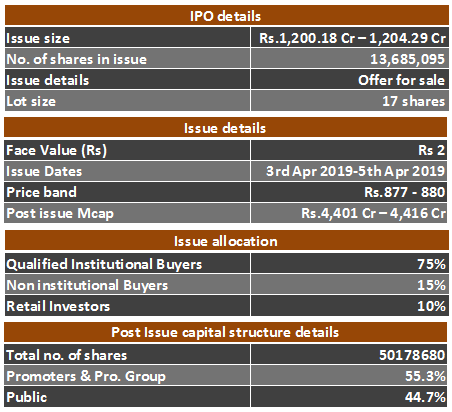 Metropolis Healthcare is one of the leading diagnostics company with a widespread presence across India. The company offers a wide range of clinical tests along with analytical and support services to clinical research organizations. They service individual patients through 1,631 patient service centres (out of which 26 are located outside India). With its strong network, the company has built a decent brand in the last few years. The company has a noticeable presence in both the B2C (business to consumer) and B2B (business to business) segments. The B2C segment has relatively higher margins and forms around 43 percent of the company’s revenue currently. Going forward, the management aims to grow this to around 60 percent. This would strengthen margins in the coming years. B2C segment is also a cash based segment, so the growth would enhance the cash flows.

The company has strategically followed an asset light approach for expansion and nearly 78 percent of the company’s network is on contracted third party patient touch points. In addition, they also provide home collection service. This has facilitated rapid expansion in the past few years.

The healthcare segment has seen immense policy support. With growing health awareness the industry is positioned to grow. Being a leading player and a strong brand, the company is positioned to capture a substantial share of this growing pie.

In 2015, the promoters, in their personal capacity, pledged around 28 percent of their holdings to KKR India in order to raise funds to facilitate the exit of Warburg Pincus. This loan has been refinanced recently with Vistra ITCL (India). The promoters plan to pay off a portion of this loan through the proceeds of the issue and release a portion of the pledged shares. However, around 10 percent of the promoter holding would still remain pledged.

Any default under the agreements will entitle the pledgee to enforce the pledge over these shares which may dilute the promoter holdings, increase stock volatility in adverse times.

Mets Advisory holds around 29 percent stake in the company which is owned by the promoters of Metropolis' Ameera Shah and Dr Duru Sushil Shah. are partners in the firm. The covenants on loans taken by Metz could limit the ability of promoters as well as Metropolis to leverage in the future.

Amid heated boardroom tussle and top-level changes since 2010, the company has also seen entry and exit of partners and PE firms. While most of the changes are now past, there are several outstanding legal proceedings against the company, its subsidiaries, directors and promoters. An adverse outcome of such cases could have a negatively impact the company.

The company holds a 34 percent stake in Star Metropolis Health Services Middle East LLC. Due to disagreements, Star Metropolis has stopped providing any financial information. Given the situation, the entire investment has been written off the books. However, there still remains the risk of any subsequent legal dispute and misuse of the brand.

On analysing the performance of the company with its listed peers we see that the topline and net profit growth in the past two years have been in line with the average peer growth. EBITDA margin has also been stable at around 27 percent. Return on capital employed is healthy at 38 percent and is slightly above the peer average. At the higher price band, Metropolis’s IPO is priced at a 2019e (estimated) price-to-earnings of 37 times and an EV to EBITDA of 23 times. At these levels, valuations seem expensive but largely in line with peers.

We find the business attractive and believe the industry is positioned for growth. However, given the heady valuation, we rule out significant short-term upside. However, investors may subscribe with a long term view in the stock.