Data scientists are in high demand across India. Hiring consultants estimate that about 95,000 vacancies for data scientists exist in the country

Thirty-six-year-old software engineer Shirley Fernandez took a break from work after pregnancy complications in 2014. Seven years later, she is about to join an IT company in Germany, thanks to the data science programme she pursued.

“Initially, I was under the perception that my engineering degree was sufficient. But I was mistaken. Since I noticed that the maximum job openings related to IT/tech pertained to data science, I decided to pursue a two-year online programme,” she said.

An estimated 1.145 trillion MB of data is created globally every day. But what does one do with this data? This is where a data scientist comes into the picture. From IT and retail to banking, financial services and insurance, every sector requires scientists to handle this data using technology and glean relevant information from it.

No wonder data scientist roles are up for grabs across India. Hiring consultants estimate that there are almost 95,000 vacancies for data scientists in the country.

The World Economic Forum predicts that data analysts and scientists will be the No. 1 emerging job role globally by 2022.

What is data science?

Simply put, data science is the technique of analysing raw data and making it relevant – such as customer behaviour or market trends. These professionals primarily mine big data to try and predict new revenue opportunities or customer behaviour.

The skills required to become a data scientist are a mix of computer science, mathematics and statistics. Those with an engineering degree and specialising in computer science are at an advantage for this role.

Is demand rising for data science?

As companies seek such talent, education platforms are seeing a rise in demand for such courses.

Mohan of upGrad, an online higher education company, said it has over 22,000 students for data science. The platform’s growth is doubling quarter to quarter and from an enrolment standpoint, its data vertical has seen an increased intent of 65 percent in the fourth quarter of FY21 from a year earlier. 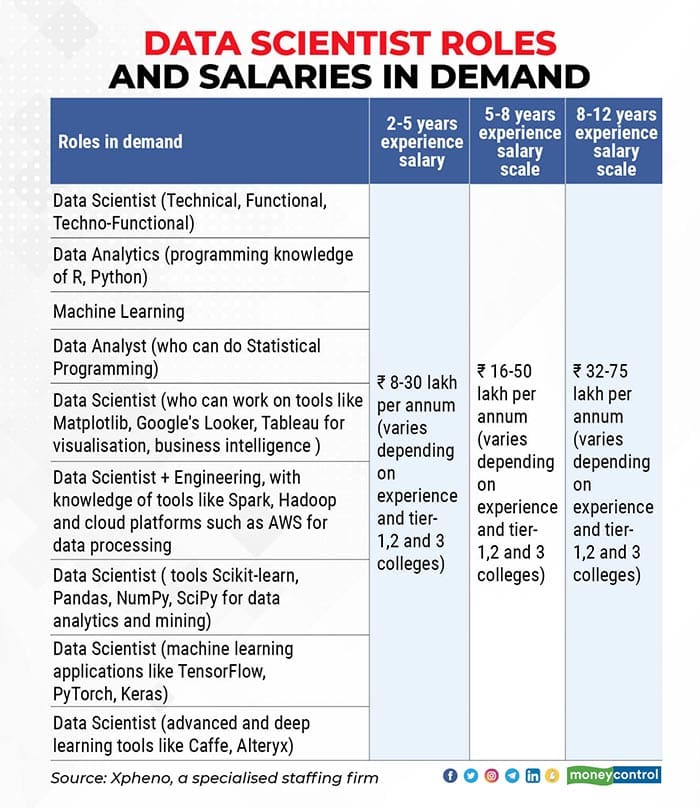 “Owing to evolving industry requirements, the domain has also caught the attention of women professionals. As per our Q4 2021 (January-March) data, we have 2/5th of women learners enrolled for courses like data science, machine learning and artificial intelligence,” he added.

The rise in demand is also because traditional engineers can’t do the job.

Abhimanyu Saxena, cofounder of Scaler Academy, which calls itself an online tech-versity, said when large volumes of data are generated, companies that can analyse, process and leverage the information have an upper hand over others.

“It (data) is the new oil. It has become pretty obvious that the ability to analyse data and make decisions are so important for companies. So, people who have the expertise to do that become exceptionally lucrative for the company. There is a huge scarcity of talent in this field as well,” said Saxena.

Mohan said recruiters include a mix of IT, consulting, media and fintech companies. Among them are Cognizant, Infosys, Wipro, Capgemini, E&Y, HT Media, Group M and Paytm Money, he said.

Great Learning, an online higher education platform, said that increased funding in Indian analytics startups and investments in the development of enhanced analytics capabilities in India are among the reasons for the rise in demand for such professionals.

Companies are creating new designations for such professionals. Slice, a fintech startup, announced the appointment of Nitin Basant as its chief data scientist. Hiring consultants said designations such as chief of data and chief data scientist are being carved out to attract young professionals.

“If you have a data science degree, nothing like it. If not, having experience handling data at IT/ITeS firms for two-three years will mean that doors are open across companies hiring data scientists,” said Jose Mathews, senior vice president at PayHire HR Consulting. “Salaries are also very attractive and could even touch Rs 50 lakh per annum for those with three-four years of work experience.”

Considering that this is still an evolving field, the pay offered is phenomenal. Those who have worked in IT or allied sectors overseas for two to three years can command a 25-30 percent premium, according to industry data.

However, the pay scales are far from uniform. Saxena of Scaler Academy said salaries are fragmented based on colleges, skills and the hiring company.

Is there enough talent?

No. Saxena explained that there is a huge demand-supply gap even though there are so many online data science courses.

“Most of the programmers are still theoretical. Many employers complain that while there are many with data science certifications, they do not have the skills that we look for,” he said.

Given the close to 95,000 vacancies in this field, it is clear that demand outstrips supply. Data from staffing firms showed that almost 25 percent of the vacancies were in Bengaluru. Other prominent locations include the National Capital Region, Mumbai, Pune, Chennai and Hyderabad.

Mohan of upGrad said some of its students have found attractive roles. He recounted the example of Supriya Raman who secured a role as a data scientist with Levi Strauss & Co. with a salary hike of 120 percent.

What are the skills needed?

To deal with huge volumes of data generated by users, one has to work with frameworks such as Hadoop to process the information. Unlike a few years ago, processing data is key to building a network. For this, data engineers and data scientists are needed. Anand Narayanan, chief product officer of Simplilearn, an online education technology company, said earlier that data from voice, text and email need to be structured in a common format before they can be used in areas such as targeted advertising, recommendations one sees on e-commerce sites or options displayed on Netflix based on viewing history. Businesses use the data to get a better understanding of their clients’ needs.

Three key skills are needed to become a data engineer. Apart from programming languages such as Python and R, engineers should know more about data frameworks such as Hadoop and cloud computing.

Tech platforms define Hadoop as a set of open source tools to store and process large volumes of distributed data. Other popular tools include Apache Spark, for which developers are paid as much as Rs 10 lakh per annum, according to a report on Analytics Insight. The average salary of a data engineer ranges from Rs 5 lakh to Rs 15 lakh, depending on experience.

While data engineers create data pools in a structured format, it is the data scientists who crunch the numbers to make sense of it. Narayanan explains that data scientists should have knowledge of programming languages such as Python, statistics and big data and machine learning tools such as Google Tensor flow.

Engineering colleges such as the Indian Institutes of Technology now offer specialised courses in this domain. IIT Jodhpur has a B. Tech in AI and Data Science. In June 2020, IIT Madras launched its maiden fully online degree programme, which was a B. Sc degree in programming and data science.

To make it more inclusive, IIT Madras said students currently enrolled in a different on-campus programme anywhere in India can pursue this course without having to switch careers or courses. This is irrespective of whether a student has enrolled for an arts, commerce or science degree. Traditionally, a science degree programme demands that candidates have studied subjects like mathematics and statistics in class XII.