A report from the National Employability through Apprenticeship Program (NETAP) from TeamLease Skills University suggests 58 percent of the companies reviewed were keen on increasing their apprenticeship hiring in H1 2021 (January to June 2021).

There is good news for apprentices across India. A report from the National Employability through Apprenticeship Program (NETAP) by TeamLease Skills University suggests 58 percent of the companies reviewed were keen on increasing their apprenticeship hiring in H1 2021 (January to June 2021).

Apprenticeship refers to a way of learning a craft or trade under a master craftsman to be better equipped for a job. An apprenticeship is an agreement between a person (an apprentice) who wants to learn a skill and an employer who needs a skilled worker.

According to the report, about 41 percent of employers are keen on hiring apprentices.

Out of the 18 sectors reviewed, over 16 were keen on hiring apprentices. While manufacturing (55 percent), automobiles & ancillaries (51 percent) and retail (48 percent) are the leaders, sectors like travel/hospitality and beauty/wellness that are hit by the COVID are making strong comeback. 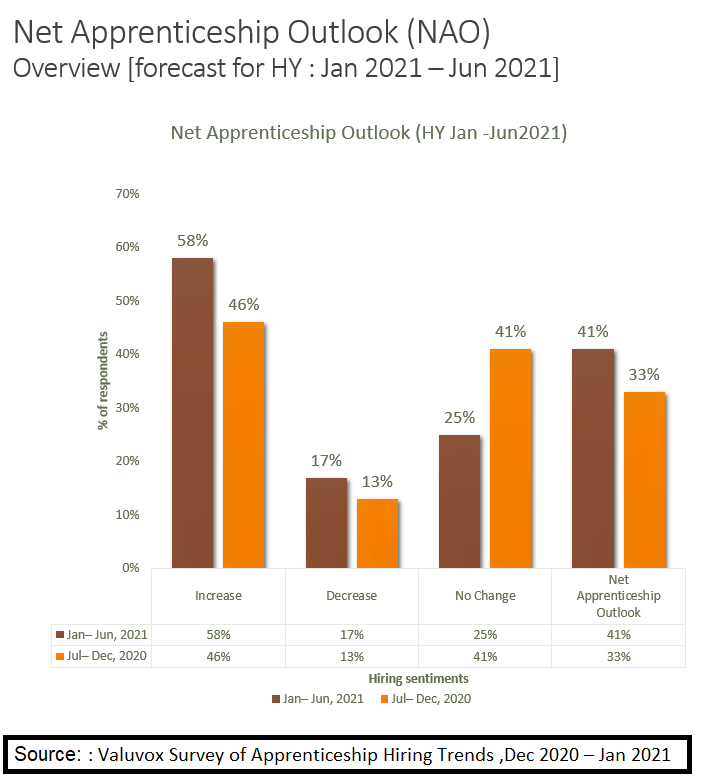 Travel & Hospitality and Beauty & Wellness which were at -10 percent point and -5 percent point, respectively, in the previous half-year (July–December 2020) have made a remarkable turnaround.

The net apprenticeship outlook for travel and hospitality, beauty and wellness has grown 34 percent and 31 percent, respectively.

A company can hire up to 15 percent of its total strength as apprentices. India is estimated to have close to 65,000 apprentices.

The Apprenticeship Act, 1961, states that any establishment having a workforce (regular and contract employees) of 30 or more is mandated to engage apprentices as 2.5-15 percent of their workforce (including contractual employees) every year.

Cities like Bangalore, Mumbai and Kolkata are the most welcoming towards female candidates compared to other cities.

Sumit Kumar, Vice President - NETAP, TeamLease Skill University said, “Apprentice hiring has embarked on a very positive trajectory in the last couple of years as more employers are realizing the merit of the apprenticeship model to build a robust pipeline of employable talent. In fact, from 2018 to now, we have seen a 2.5 percent YoY increase in employers who are willing to increase their apprentice intake."

Among the various locations. Chennai has emerged as the most apprentice friendly city. In the non-metros category, Ahmedabad and Nagpur are the most promising cities.

From a profile and job role angle, roles like fitter/welder (in manufacturing) followed by sales executive (in agriculture) were the most sought after.