The 15 percent year-on-year volume growth for the fourth quarter of FY16 came as a surprise but maintaining it in the coming quarters will be a challenge, says Murtuza Arsiwalla, Analyst at Kotak Institutional Equities.

Volumes saw strong growth and operating costs were reduced owing to a better fuel mix and fall in fuel prices.

In an interview with CNBC-TV18, Murtuza Arsiwalla, Analyst at Kotak Institutional Equities, said that the 15 percent volume growth came as a surprise but maintaining it for the coming quarters will be a challenge.

He expects a 8-10 percent volume growth in FY17 and suggests a sell rating on the stock with a revised target of Rs 2825 against Rs 2450 previously. 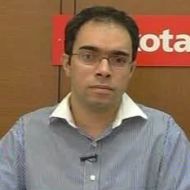 In the same interview, Vaibhav Agarwal, Cement Analyst at Phillipcapital, agreeing with Arsiwalla, expects the volume growth to fall and taper to 6 percent for FY17.

The rerating of the stock will be driven by cement price improvement and not by volume growth in the future, he said.

Agarwal maintains a buy rating in the company’s stock and suggests a target price of Rs 3700.

Below is the verbatim transcript of Murtuza Arsiwalla & Vaibhav Agarwal’s interview with Reema Tendulkar & Nigel D'Souza on CNBC-TV18.

Nigel: The numbers they surprise positively, you still maintain your sell rating but you have increased your target price. So, you believe that the operational performance that they have delivered is not sustainable?

Arsiwalla: If you look at the numbers the big surprise that came was the 15 percent growth in volumes which is fantastic and the lower petroleum coke prices which is benefiting. However, maintaining the 15 percent volume growth on a sustainable basis may be more challenging as corroborated by the management on the earnings call. Petroleum coke prices have also seen a reversal. On the flip side prices were particularly weak during the quarter and will see some improvements sequentially.

However, if you look at pan India prices essentially they have been more or less flat. If you look at April 2016 prices and compare it to quarter one 2016 you will realise that they are essentially flat year on year versus consensus estimates which are building in still a strong improvement both on the volume and pricing front. So, we think a lot of the positives that even the current results sort of reflect are there in the price. The target increases essentially is a role forward to March 2018 valuations.

Reema: How would you like to respond? Your target price is at Rs 3,700 that is about a 15 percent upside from current level. Do you believe that the volume growth of 15 percent which UltraTech Cement saw in this quarter is sustainable and also the fact that the valuations are not looking cheap now?

Agarwal: I agree with the fact that what my colleague has said that UltraTech will taper down its volume growth going forward. However, what we also see in quarter four that UltraTech has played on the advantage of cost saving in Q4 and going forward we expect the volume growth to come down but at the same point of time we also believe that given the consolidation in the industry cements prices are well improved as we see that demand improvement is stabilising.

What I will like to highlight here is that the earnings sensitivity to UltraTech earnings is very high to cement prices and he will be the largest beneficiary across the sector. That is the reason probably UltraTech is best structure to fit in the overall cement space. The re-rating of the stocks of UltraTech will be driven only by cement price improvements and not by volume growth going forward.

Reema: What kind of a read-through will the UltraTech Cement numbers have on the other stocks in the sectors say an ACC Cement, Ambuja Cements or any of the midcap cement companies that you cover?

Arsiwalla: The key read-through is that volume trajectory will be strong and essentially if you look at the same period last year, the point that I highlighted previously is that you had volume declines. That is sort of aid to an extent the volume recovery. I think the volume numbers across companies will be something that we would be watchful of. Whether others can replicate the very strong performance that UltraTech delivered, realisations on expected lines will be weak across companies.

The other surprise element that came in is on petroleum coke where one was aware that petroleum coke prices were trending down. In our own estimates we had built the sort of benefit to come in over a two quarter period as oppose to all of it in four quarters 16. What UltraTech’s results are essentially suggesting is that a lot of the benefit is captured and so it would benefit players with a higher leverage to petroleum coke players like JK Cement, JK Lakshmi Cement, Shree Cement would be benefiting.

Again if you look at the price trend which is again something that we spoke about there is a lot of regional disparity that is kicking in between March and April where you have seen prices in North improved dramatically, whereas in South which traditionally has been the region with stronger prices just beginning to see a little bit of trending down and not dramatic but still trending down.

So, that shift will happen where players in North who also have a higher sort of petroleum coke proportion and will sort of benefit more from quarter one 17 numbers will be much stronger and that is how we would like to position ourselves.

Nigel: Talking about South India prices could you compare it on a month-on-month basis what exactly has happened over there? In January we did see couple of price rise that was taken and they were not sustainable over there. What is a reason reading of prices because various industries sources indicate that in the month of March itself we did see prices that were cut and volumes that were push through? Are you seeing anything different in the month of April?

Arsiwalla: Even for the month of April what you have seen is it not dramatic like you saw in the month of March with North India where you saw Rs 20-30 per bag kind of price increases. However, what you are seeing is the Rs 4-5 sort of price decline. However, what that does is that if you are looking at two or three quarters, two or three months where in a prices declines are Rs 3-4 it is sort of bunching up.

Now when you look at quarter one 17 numbers for prices in South India and when you look at the April numbers you are looking at a Rs 20 sort of per bag decline year-on-year compared to the same period last year.

Whereas if you look at north players you are seeing a Rs 30-40 sort of price increase. So that is the kind of disparity that you are seeing. At the cost or repeating again in south it has not been as dramatic but gradually they have been trending down and it is all just adding up now.

Reema: What would be your estimates for FY17 volume growth that UltraTech Cement will report? It was 9 percent in the year gone by, your estimate for the coming year?

Arsiwalla: We are working with a 8-10 percent sort of a volume growth for 7-10 percent generally over the next two or three years is how we are building our volume trajectory.

Nigel: I am just reading your report and for UltraTech you all are one of the highest on the streets in terms of EBITDA estimates. Two factors play out of there, one was the volumes. Let us talk about the petroleum coke prices have been declining. ACC, Ambuja, I think Ambuja has a fair bit of exposure to petroleum coke do you expect them to surprise positively and also could you tell us what is your outlook on both those two stocks?

Agarwal: In last quarter as well Ambuja did not report any sequential improvement in petroleum coke usage so we definitely expect Ambuja to surprise positively in quarter one in the January- March quarter to surprise positively on the petroleum coke front. ACC Cement we don’t see any major structural improvement except for the Jamul commissioning which is due this quarter.

Apart from that we don’t see any reasons why ACC Cement should, we have a sell rating on ACC Cement and a buy on Ambuja but that price target is already achieved for Ambuja.


Time to show-off your poker skills and win Rs.25 lakhs with no investment. Register Now!

Countries most impacted by COVID-19