172@29@17@105!~!172@29@0@53!~!|news|business|earnings|to-remain-buyermm-fin-despite-poor-q3-religare-cap-1258351.html!~!news|moneycontrol|com!~!|controller|infinite_scroll_article.php!~!is_mobile=false
Upcoming Webinar: Analyse the security landscape of digital payments at 11 am on October 20. Register now!
you are here: HomeNewsBusinessEarnings

Despite Mahindra & Mahindra Financial Services positing below than expected Q3 numbers, Siddharth Teli, Religare Cap remains a buyer of the stock because according to him the long-term potential for the stock looks good. He recommends buying on declines to around Rs 230 for a target price of Rs 290. "We have a one year target price of Rs 290 on the stock based on hypothesis that at some point in time the non-performing loan (NPL) situation will get corrected and growth will return," says Teli.

The asset under management (AUM) growth for the company could see a slowdown. It could be closer to 25 percent for this year and around 20 percent for the next year, says Teli. 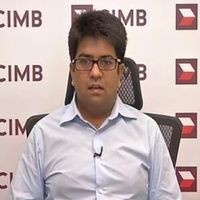 Below is the interview of Siddharth Teli, Religare Cap with Reema Tendulkar and Ekta Batra on CNBC-TV18.

Reema: M&M Financials has reacted to its earnings. It is down today, it was down yesterday and in fact in 2014 itself it has lost closer to 25 percent. Has the stock price priced-in all the negatives that we could see in the earnings or there is more downside to go?

A: I think that the downside has to be viewed in backdrop of the fact that last three years assets under management (AUM) compound annual growth rate (CAGR) was as high as 38 percent. So, that was slowing. Valuations were heavy at Rs 320-330 odd levels.

However, the Q3 numbers were dismal and while we were expecting some pressure on net interest margin (NIM) and asset quality it was much higher than expected. The NIM on a calculated basis for the quarter were around 50 basis points and growth rates on disbursement side has come off as well and it is closer to 8 percent.

We believe that AUM growth will slowdown; this year we should see closer to 25 percent kind of an assets under management (AUM) growth and next year closer to again 20 percent. So, earnings will be under pressure. We have seen almost 10 percent earnings cut for both 2014-2015.

However, despite the correction the stock is not really cheap at this point in time and still trades at 2.3 times. We believe that long-term potential it is fairly good so we still remain buyers into the stock. However, we think that the stock would be a better buy at closer to Rs 230 levels.

Ekta: What are you factoring in, in terms of the gross non-performing loans (NPLs) as well as net NPLs going forward? Do you think that this is now the start of a worsening asset quality cycle for M&M Financials?

A: I think that this particular quarter a couple of states witnessed NPLs because prices for certain produce were not decided on account of elections. Hence, cash flows are under strain as far as customers are concerned. So, that should start reversing over a period of time. So, I wouldn’t say that we would extrapolate this asset quality performance to the ensuing quarters of next year as well.

Typically fourth quarter is very good quarter as far as asset quality is concerned and gross NPLs come down meaningfully which might not be the case this time around. So, net-net we are not building any meaningful rise over here but we would like to see how these NPLs pan out going forward.

Ekta: If in case there is further asset quality stress and maybe NIM pressure going into the quarter into maybe Q4 would there be a re-rating on the stock on the downside that you would think of?

A: If asset quality pressures continue then your NIMs will remain under pressure simply because there are reversals of interest incomes as well which stood at almost Rs 400 million this time around. So, although some bit of it is already built into our numbers but if it turns out to be higher than expected then there could be some more cuts.

Stock currently trades at closer to 2.3 times FY15 book value and 12 times earnings. So, as I said you the stock is not cheap. If asset quality falters further then you might see some bit of re-rating as well. However, this is more like something which will get corrected over a period of time.

Reema: You said you would turn buyers on the stock at levels of say around Rs 230. If it does go to those levels and investors do buy into it what kind of return could they expect on M&M Financials?

A: We have a one year target price of Rs 290 on the stock based on hypothesis that at some point in time the NPL situation will get corrected and growth will return. So, based on that, that is the official target price.