172@29@17@143!~!172@29@0@53!~!|news|business|earnings|sustaining-marginschallenge-for-fmcg-cos-prabhudas-lilladher-943331.html!~!news|moneycontrol|com!~!|controller|infinite_scroll_article.php!~!is_mobile=false
FREE virtual training session on Passive Income Secrets: October 24 and 25, 2020, 10am to 1pm. Register Now!
you are here: HomeNewsBusinessEarnings

Sustaining margins a challenge for FMCG cos: Prabhudas Lilladher

The challenge for most of these companies would be to sustain margins in one-two quarters of FY18, said Amnish Aggarwal, Senior Vp-Research, Prabhudas Lilladher.

Amnish Aggarwal, Senior VP-Research, Prabhudas Lilladher, has a positive longer term outlook for FMCG players HUL and Asian Paints and has accumulate rating on them.

However, the challenge for most of these companies would be to sustain margins in one-two quarters of FY18, he says.

According to him, there was nothing positive or negative about HUL numbers. The weakness in volume growth was also as per their estimates.

So, one needs to be cautiously optimistic on HUL mainly because the stress in rural areas and wholesale segments will continue for some more time and the recovery will be very gradual. The recovery has been led by urban India although over time other segments will also pitch in.

He expects the stock to remain range bound and says their target price is not significantly different from the current price of around Rs 862. 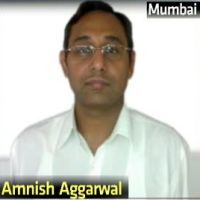 Asian Paints is a classic long-term story. However, he would keenly watch for management commentary.

It reported 1.52 percent increase in consolidated net profit at Rs 489.31 crore for the third December quarter of the current fiscal.