Here's what Altamount Cap is betting on post Q2 earnings

Prakash Diwan is bullish on Escorts despite lower-than-expected Q2 earnings due to possibility of increase in sales from its constriction equipment segment which is a huge area of margin growth for the company.

In an interview to CNBC-TV18 Prakash Diwan of Altamount Capital Management shares his views on the market and his preferred bets going ahead.

Below is verbatim transcript of his interview:

Q: Bunch of numbers have come in over the last few days since we have spoken with you. What is the pick of the pack, what catches your eye?

A: This time there is a particular company, which has not reported great numbers and I would still want to buy it. In fact because of that I want to buy it and this is Escorts because we have seen not only is that VRS component of the Rs 32 crore taken off the bottomline to some extent, the margins haven’t been in line with what the street was expecting. This is because the improvement that the company is talking about, having started in all segments, is just restricted to tractors right now.

The big component of its sales now will be from the earthmoving equipment and the construction equipment which is a huge area of margin growth for them. 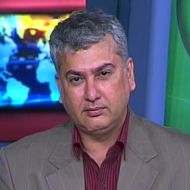 It hasn’t yet taken a bit - the kind of order flow that we expect with some of these smaller companies like ACE Construction, Escorts, JCB’s alliance with Escorts has always been a market leader of sorts for them but I think that is an area that is going to be very promising as margins improve.

Q: The construction business losses this time too have doubled and so, don’t you think there are better opportunities in the market?

A: There are, but Escorts’ on a standalone basis is going through a lot of turnaround pains. So this is going to happen, what TVS went through a year back and what Ashok Leyland went through six months back, so you need to look at the bottoming out of the earnings cycle and Escorts at Rs 152 - and that is the reason it came down from Rs 176 to Rs 150. So it is an ideal opportunity.

Q: Construction is just a tenth of their number, so would you pin your hopes on that one?

A: No, tractor is already one area that is growing.

Q: You expect it to do well?

A: Yes. It didn’t do well this quarter but if you see vis-à-vis Mahindra then Swaraj, their brand recall has always been higher and if there is any sort of trigger that everybody is counting on at some stage will happen then the valuation will definitely change dramatically in this.

Q: We have lot of results reaction, Do you like Apollo Tyres?

A: Yes, the saving on the input side and the kind of growth that it has clocked, replacement market, all of it kind of converges to bring Apollo into a sweet spot of sorts.

Also, there is a significant upside from here. Ceat is also in the same zone but Apollo is definitely one stock that should see some more ownership coming from institutional side.

Q: The more important or compelling auto ancillary company at this moment is Motherson Sumi. Were you convinced by the management’s explanation of why their margins were a bit under the weather, why the numbers were a tad short of estimates?

A: Quite understandable. I don’t think it is such a cause of concern. Of course we always feel that this stock had run up too ahead of expectations but that happened, there will always be a bit of a lag between numbers coming.

You also need to look at the Gabriel numbers, these are quiet performers that come out of the blue and give you such kind of stellar performance but under that shadow you also have the Munjal twins, the Munjal Showa, Munjal Auto, they are also very encouraging. They supply to Hero Motocorp.

Hero Motocorp is growing at such a phenomenal rate but we have not discounted this, they are still available at the same discounting as last one year and so, these are certain things you need to look at. The headline auto ancillary players will always be overvalued but you need to look at one level below that.

Q: Is Munjal Showa one level below?

A: Yes, because it is not something that goes to all OEMs unlike Gabriel which is like a market leader but even for a captive market it definitely has a lot of growth into it.

Q: What about TVS Srichakra, that one rallied 20 percent yesterday?

A: Yes, it is one of those scarcity premium that it is getting. They are into those low cost tyre, which is also likely to take off now but it is a bit overdone. It is not a segment that you can rely on from a very long-term perspective.

Q: What about Bharat Forge?

A: This is the company that has been struggling since last two years to set so many things right, in terms of its acquisition, in terms of its operational efficiencies but getting all of that to do so well.

Now with the defence area opening up to Bharat Forge, it is something where the capacities would start looking very meagre, till last year we were worried about the huge capacities that built up with this but this is not much of use.

It is phenomenal, we don’t need to worry about the kind of run up that is there, you can still kind of dip into it.

Q: Would you buy Amtek Auto at this price?

A: The management wants to take a pause, they want to consolidate and everybody is questioning whether at such a high leverage, the valuations could get further richer. But the group is a market leader in whichever segment, geography and product segment it has been present in.

Therefore, another two quarters and this stock could again see a significant run up begin there. In between you would see a few dips that would be an opportunity like Escorts buying into whenever there is a sentimental or a technical correction otherwise it is definitely a long on both the stocks.

Q: Outside the auto pack, what has impressed you?

A: We have discovered one interesting stock. This is also an area that has got a lot of attention and that is white goods and household appliances.

There is a company called Singer which all of us believe as a multinational but is only into sewing machines. They have expanded into things like food processors, induction cookers, irons, stuff which is very easily amenable to their value change.

Singer’s sewing business is a leadership business but doesn’t fetch that kind of a premium as yet because the company is not very active in the market, it is just about Rs 200 crore market cap.

If it were to start getting more visible, use its distribution chain to start supplying, the same things which it manufactures, look at what Whirlpool, Symphony or Voltas or any other related company gets.

More money in the pockets of people, this is one segment that is very promising and people still associate Singer as a very strong MNC brand but it is actually a home grown brand.

Q: The previous quarters numbers were quite strong. Rs 65 crore of revenues versus Rs 40 crore last time and about doubling of profits.

A: I was quite surprised to see the way they have - it is an unsung hero. One of the machines is a global patented stuff, which is that zigzag sewing machine, which still remains to be the one which people haven’t yet tracked and earlier they used to have a lot of support from the European markets, all the fashion industry was depended on their equipment but it had a slowdown.

They have diversified at the right time, the Jammu plant re-started in 2013 and so, it has kind of come up to capacity, hasn’t got affected by the floods and that also we checked out.

They are not high priced but very high on quality. That is what they position themselves at.

Pressure cooker is a new diversification but putting it in that category, certainly the P/E multiple band goes differently. It is more institutional now.