Rahul Rathi, a wizard of Dalal Street, has 2 investing styles

Ramesh Damani‘s popular Wizards of Dalal Street is back, and this time Damani interviewed Rahul Rathi, MD & Chairman of Purnartha Investment Advisors. Rathi spoke about his two styles of investing: Invest in a business, and the other strategy is to invest in the businessman.

Rathi spoke about his two styles of investing: Invest in a business, and the other strategy is to invest in the businessman.

In a business, you look at a 11-year history which is a GDP cycle, he said. Rathi analyses how a business does in this period, whether it has perofmed well during times, good and bad.

The key metric to follow here is to see whether the business has created wealth. One way of doing that is to look at how operating cash flows have grown, he said. 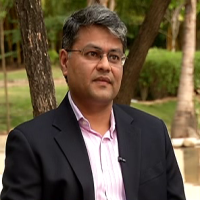 He also spoke about his biggest learnings from mistakes.

Below is the verbatim transcript of Rahul Rathi’s interview to Ramesh Damani on CNBC-TV18.

Q: Numbers do not lie and that is a core belief with you, is it not?

A: Yes,numbers are a measurement of an outcome. If you look at companies like Asian Paints, HDFC Bank, Bajaj Auto, Infosys, Bajaj Finance, they have all returned more than 250 times since inception. That is a number. And why have they returned these kind of stellar returns is what other numbers show.

Q: There are two kinds of businesses that you look at. You divide them in two ways. Tell me about it.

Q: What do you look for beneath that number? You get 11-year snapshot. Now, what are you looking at?

Q: But that doesn't capture the capex that lot of the business requires or a lot of dividend payouts they have to make. So why is operating cash flow that meaningful?

However, companies that enjoy a golden period have two variables that are common to them. The first is 10 percent volume growth which meant that there is a demand for the company's products and second is being debt free which meant that they have pricing power.

Q: But how does that 'no debt' criteria work for you?

Q: That is strictly quantitative strategy that almost anyone with a laptop and a database can replicate. What is the value add that you provide?

A: We have three legs when we evaluate a company. One is the numbers, which we have done. The second is identifying what the management team and the organisation is for the company. We found in our studies that there are two sources of leadership in any company. There is one who is a visionary, who thinks about what the world will be in the next ten years, a big picture guy, and there is a data driven guy who is also a leader who tells the big picture guy whether his vision has risks, the data supports his vision or there is a lot of risk to his vision and he should change his vision.

A: Deepak Parekh, Sanjiv Bajaj, Vikram Somany of Cera Sanitaryware are some of the guys whom I believe are leaders in the next millennium and continue to know how India will pan out.

Q: Among the newer sets you find anyone who strikes you as a big picture guy?

A: Sanjiv Bajaj is new; he is only 48 years old. He started the financial services company and has continued to do well.

Another guy who is a recent entrepreneur and whom I believe is going to be the entrepreneur of next generation is Samit Ghosh of Ujjivan Financial Services.

Q: Anyone else that strikes you in all these years?

A: The person whom I follow tremendously and who has given me a lot of energy is Ramdev Baba who has delivered phenomenal growth in Patanjali.

Q: After looking at the qualitative stuff then you look at a valuation matrix. What is that?

A: In our history of 30 years we found that if we can buy a company whose seven to nine years of cumulative operating cash flow is equal to the marketcap of the company then these investments always create wealth. However, for me the golden mean is seven years but I am comfortable between seven to nine years because cost of capital has come down significantly with Japanese interest rate being near zero.

Q: Is there any sectors that is more prone to higher returns on capital, better cash flows, so only look at those businesses as oppose to other businesses?

Q: How does a retail investor benefit from this enormous database that you have?

A: We are a Sebi registered investment advisor and the Purnartha model's work is where the client tells us that this is the amount he wants to invest and he keeps it with himself. We tell him what to buy for that amount and he gives us a contract note once he is invested from his own account, keeps the money in his own Depository Participant (DP) account, the stocks in his account.

He gives us a contract note and we have a technology that we have build over two years that captures the net asset value (NAV) for that person and at the end of the contract period we calculate what has been the return and then we share the profit in a way. So, all the control of all the money is with the client.

Q: And you put your own money where your mouth is?

A: Absolutely. 95 percent of my total wealth for me and my children is invested in the strategy.

Q: You have had a great career, you analyse stocks and you look at it differently than most people. Give me some learning that you can share with us.

A: The biggest learning have come from the mistakes that I have made and one of the mistakes I want to share is Jammu and Kashmir Bank where data and the outcome did not match.

Jammu and Kashmir Bank has a clear monopoly to be able to recover money whenever they want. But as soon as they started lending in Mumbai and Bengaluru, the recovery mechanism in Jammu and Kashmir did not work and their non-performing assets (NPAs) were much higher than expected. So, we learned that late.

Q: So, what was the learning there? The data itself is not enough?

A: That is true. What we want to see is their current execution and their history, are they in sync or they are different. If they are different, we need to re evaluate whether the capability what we are investing in is what the history matches.