Due to this transition towards marginal cost of funding, Romesh Sobti, MD and CEO, IndusInd Bank says there will be a transitory compression of margins, but not a permanent one.

After HDFC Bank lowered its base rate to 9.35 percent from 9.70 percent on Monday, there is a lot of pressure on other banks to follow suit. But Romesh Sobti, MD and CEO, IndusInd Bank says it'll be a while before it lowers rates.

IndusInd Bank's base rate currently stands at 10.85 percent, while its deposit rate is at 7.94 percent.

But due to this transition towards marginal cost of funding, Sobti says there will be a transitory compression of margins, but not a permanent one. "As soon as average cost comes up to the marginal cost and costs stabilise, the catch up will happen. I think it is a transitory phase and there is no need to read much into compression of margins," he adds. 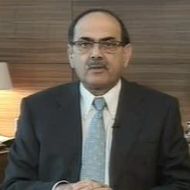 Below is the verbatim transcript of Romesh Sobti's interview with Latha Venkatesh & Sonia Shenoy on CNBC-TV18.

Latha: Are you announcing your base rate cut?

A: You will have to wait a while for that.

Latha: There is a rather dramatic cut that HDFC Bank announced. You are a distance away from their base rate but can you stick with this level of 10.8 thereabouts?

A: I think HDFC Bank's base rate cut is a forerunner to the new methodology of calculating base rates which in my sense is going to come very quickly. So there is a reiteration of the guidelines which are now draft guidelines. Therefore, we are seeing almost certain move towards marginal cost of funding and its oxymoron to say that marginal cost of funding falls faster than the average cost of funding and therefore there would be a downward movement in the base rates. We have done our own simulations and things like that, so we are in preparation of the next move when these drafts become guideline. I think HDFC cut is a forerunner on this account.

Sonia: This transition towards the margin cost of funding. How much of pressure do you think it could put on margins, not just for your own bank but in general for the industry?

Latha: What is your sense about how much rates can fall n the first place? Even at the current Reserve Bank repo rate and the current inflation rate of 3.7 deposit rates are a distance. I can’t see why any reason why deposit should be collected at 8.50 and 8 percent if loan growth in the system is as low as 8.6 percent? It is kind of defies logic. So would you all price your raw material much lower? Do we see 7.50 percent for fixed deposits sometime soon and if yes, when?

Sonia: Suddenly in the last many months there has been so much competition in the banking space and I wanted your thoughts on how disruptive this whole payments banks issue can be. Considering that it seems very evident now that mobile technology will perhaps be a game changer going ahead. I now for a bank like yours, you have a strong competitive advantage in vehicle financing extra but do you think that the new payment banks will compliment the industry or will head and compete the industries?

A: Personally I am not so found of this word disruptive; because I think disruption really happens and has a very short transition and reality catches up very quickly. The reality is that at the end of the day sustainable businesses can only be formed out of sustainable profits. If you are working on a single product basis you have got to work out a business model that will give you sustained profitability. But if by disruption you mean that the current structure of cost for instance etc would sort of moderate and come down I would agree to that.

So, I would see them as additionally additive sort of and complementary to the existing system. I think the cake is going to grow. I think there is too much being said about how much they will take away from the existing banks because I don’t think banks are going to sit tight and watch this happening. Banks will also work on their pricing system etc and the cake is growing. They will take away a piece of the growing cake so it is complementary and this whole issue about disruption and market shares is being moving dramatically this will play out very quickly.

Latha: Are you noticing the number of accounts in your special mentioned accounts (SMA) I or II declining? Is there a reasonable confidence that stress is coming down?

A: I can only talk about my this thing of course we have visibility of the entire banking system between banks we know whose SMA is how much. Our SMA certainly has come down. The number is just a handful you can count them on probably one hand. Over all I think we have some degree of stability. I don’t think there is massive additions to SMA this thing but the SMA pool is still pretty large.

Sonia: Can you just throw some more light on what the situation on the commercial vehicle (CV) side is because we have been seen a lot of pre- buying ahead of the mandatory asset backed securities (ABS) norms but the sense that we are getting from participants or from industry players is that there is no genuine demand at best it is the pent up demand that was lying in the system. Are you seeing lower amount of stressed assets from the commercial vehicle space?

A: I think the commercial vehicle space is certainly showing traction both on account of the viability of the transport operators and also on account of growth. We have seen in our book for instance that year-on-year the medium and heavy commercial vehicles (M&HCV) part that talks only of MHCV has grown 25 percent year-on-year and we are seeing 6 percent growth now quarter-on-quarter.

So, I think clearly it is no longer just a uptake, it is definitive’s trend and I would think that this trend is in spite of the fact that a bulk of the mining sector which draw a lot of these dumpers and loaders etc about 1,00,000 vehicles were sold at peak right now is only about 20,000-25,000 that will also add to this demand. I don’t think this growth is patchy, other vehicle categories I am seeing patchy growth.

However, MVCV I see a very clear trending upwards plus the fall of about Rs 14 per litre on diesel prices puts about Rs 14,000 extra into the hands of the transport operate per truck per month. That has to impact either in the numbers of days overdue reducing or this is used as seed money for new vehicles. Both of which are beneficial to players in this market.

Latha: Can you guide us on your margins; your net interest margins (NIMs) this year as well on your credit growth?

A: We never give any forward guidance. All we can say is that there are beneficial trends emerging in both our asset and liability profile. Plus off course we have more capital in our books etc so we believe that there has to be an up trending over the next three-four quarters on this thing.

Loan growth, we are seeing that the re-balancing of the book is already happening. Our retail growth is now picking up pretty nicely and robustly. We will re-balance the book and our target of doing that around the 25 percent; there shouldn’t be such an issue. Of course this quarter we have also imbibed the diamond portfolio so probably see a higher growth.