Sales momentum is very weak for most infrastructure companies, particularly for DLF in Gurugram, said Saurabh Chawla, Senior ED Finance at the company. Demand has suffered due to the over-supply in the national capital region (NCR), he said. "Smaller developers launching projects but not fully capitalised to finish them has created a dampening of the sentiment in this region," he told CNBC-TV18.

However, DLF is targeting Rs 3000-3500 crore of pre-sales booking for this fiscal, he added.

Meanwhile, DLF is working towards becoming debt free through strategic debt restructuring plans. Due diligence for the same will be complete over the next 3-4 weeks and DLF is aiming to conclude restructuring deal in the fourth quarter of FY17, Chawla said, adding, the company will become a net cash company after restructuring.

Below is the verbatim transcript of Saurabh Chawla’s interview to Anuj Singhal, Latha Venkatesh & Sonia Shenoy on CNBC-TV18.


Sonia: Before I ask you about the restructuring that everyone is waiting to hear about, I wanted to touch base with you on the earnings because this time the pre sales bookings have dropped substantially compared to what we have seen same quarter last year. Do you expect this trend of low demand and weakness in bookings to continue?

A: Yes, we have been always guiding the market that the bookings are in a very softer environment as on date. However, this particular quarter was a little bit of an exception if I may so because in the last quarter we had guided the potential customers that we will be raising prices in some of our marquee developments in phase V and hence the sales momentum in the last quarter was much better.

Obviously, in this particular quarter the most of the customers had already moved to the last quarter. We expect absorption levels to improve as we go forward, but generally the whole environment is very softer especially in Gurgaon and whilst the brightest spot in our whole portfolio was phase V but that also in the last quarter was little slow.

A: It is very difficult to predict; in real estate it is not a quarterly story. It is a very lumpy business. What we have guided the market is that for the whole year we will do about Rs 3,000-3,500 crore of pre-sales bookings. These are similar to the last fiscal year and that is what we maintain as of now.

Anuj: The larger question, then have rates peaked in the NCR region in Gurgaon in particular and should we expect decline from here on?

A: Gurgaon has suffered because of the oversupply environment over here. The last government which was once it was getting out of power they had issued so many licences and obviously that overhang continues. However, more important is that many of smaller developers or not very well capitalised developers launch projects. Capital is stuck in them, some of the infrastructure which was supposed to come back few years back for example the Dwarka Expressway, the bottleneck that got created over there that created a kind of a dampening of the sentiment in this whole region.

As these now clear out and we expect another may be 12-18 months odd for all these issues to clear out, the absorption level will not only pick up but we should start seeing good momentum from there on.

Sonia: How do you hold on to your guidance of Rs 3,000-3,500 crore? I mean even if you take Rs 3,000 crore you have done only Rs 250 crore in this quarter which means there is an ask rate of Rs 900 crore per quarter that you are looking at for the remaining three quarters of the fiscal. How do you plan to achieve that?

A: What you see is also post the one time corrections as we do the revenue recognition on Indian Accounting Standard (Ind AS) basis. So, the threshold level in revenue recognition has increased from 7.50-10 percent odd. So, that has also impacted the first quarter. 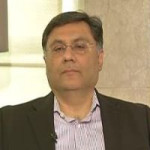 The second aspect is, we are not just a Gurgaon story; we do sell in Delhi, we do sell in other parts of the country and sometimes some markets do better than the others. At this stage given the feedback from the ground, from the sales team is that we should achieve a number for about Rs 3,000-3,500 crore for the whole fiscal year.

Latha: The big trigger of course the restructuring; can you give us an update? Kushal Pal Singh is expected to make DLF debt free. Where have you all arrived at in that restructuring process?

A: It is underway. I think what we had guided the market in our quarterly call is that we should be able to sign with a particular investor or investors in the third quarter and close the transaction in the fourth quarter. We see the same time table being maintained as of now and we are quite confident that the whole process will close out within the fourth quarter itself. So, things are moving quite well. The diligence aspect should get completed in next three to four weeks time and then we should sit across the table after receiving the binding bids from the various investors.

Sonia: Can you give us any indication of what this would do to your net debt? It stands at Rs 23,000 crore. Over the next 6 months to 12 months, how much do you think you can bring it down by?

A: You are concentrating on a gross debt on an accounting basis. Once we have a third party investor in this entity, this current entity has a debt of about Rs 12,000 crore. Post all the completion we should expect that next year given the momentum of rentals over there this gross debt number in this particular entity should be about Rs 15,000 crore. So, it will be only restricted, the debt will only remain in this entity and which basically will be non-recourse to DLF and DLF should become a net cash company there on. So, I don’t want to give you a number, I don’t want to be tricked into giving you a guidance on that but that is the general articulation from my side.