While India has long been at the centre of the South Asian economic growth story, data suggests that Bangladesh has quietly made its way to the top spot. By contrast, the same period shows a rising trend in the case of Bangladesh's economic growth rates. Between 2016 and 2018, the country’s GDP climbed from 7.1 percent to 7.9 percent. Also, its growth forecast for 2019, which earlier stood at 8 percent, has been revised to 8.1 percent by the Asian Development Bank. 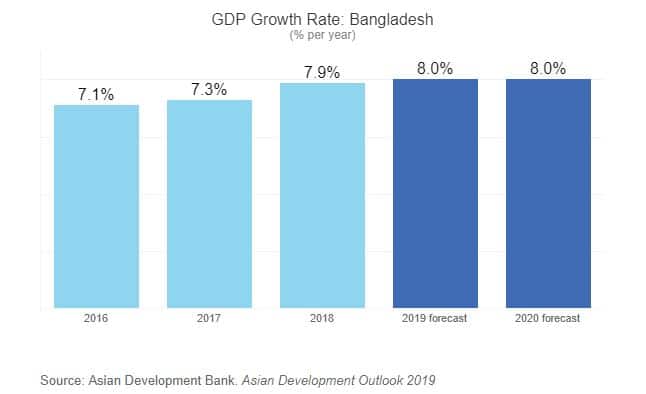 When we look at the GDP growth rate from 2016 onwards, with expectations for FY19 and FY20, Bangladesh emerges as a new leader. The downward revision of India's growth forecast to 6.5 percent from the earlier 7.2 percent does little to help. This would come as a shock to many who saw India as the poster-boy of the South Asian growth story.

The Indian growth miracle has largely been service sector-led, and its rapid growth ensured that the country was one of the fastest-growing economies in the 1990s. The decade witnessed an almost 8 percent per annum growth in the services sector on an average.

This was way ahead of the 3 percent per annum average agriculture sector growth and the 5.2 percent annual growth in manufacturing. Since 2000, the services sector has thus contributed nearly 60 percent per annum to India’s GDP.

On the other hand Bangladesh’ growth story is predominantly industry-led. The garment sector alone accounted for over 80 percent of the country’s total exports in FY2016-17, which makes it the backbone of the country’s industrial sector, according to the CIA World Factbook.