Eleven chief ministers in just over 20 years — Uttarakhand and political instability have gone hand in hand since 2000, when the hill state was carved out of Uttar Pradesh.

After Tirath Singh Rawat resigned ending his 115 days in office, the shortest tenure of any Uttarakhand chief minister, Pushkar Singh Dhami was chosen to step into his shoes on July 4.

About 57 Bharatiya Janata Party MLAs in the state met at the party headquarters in Dehradun to name the third chief minister of the state in four months, ahead of the assembly elections scheduled for early next year.

Despite constant changes in guard, this time around, a chief minister’s resignation comes amid uncertainty over by-polls, which he was required to win for continuing in office.

However, political commentator and independent researcher Sourish Ghosh, believes that “the real reason BJP sought Rawat’s resignation was because of his propensity to dominate the headlines for all wrong reasons — from his comment on ripped jeans to mismanaging the Kumbh Mela, which cost both the BJP and Prime Minister Narendra Modi’s image heavily.”

The Uttarakhand Legislative Assembly consists of 70 seats. These in turn have been carved out of five parliamentary constituencies of the erstwhile unbifurcated Uttar Pradesh.

For the unversed, in almost all big states of the country, one parliamentary constituency has a maximum of five to seven assembly seats or segments.

However, the political demography of this hill state is quite different from the others.

Here, the voters are divided along two lines — Kumaoni and Garhwali, i.e., hill and plains.

Ghosh says that the sharp divide within the hill state between the regions of Kumaon and Garhwal, plays a big role in the state’s inherent political instability.

“The Kumaon-Garhwal problem has been an issue that has haunted Congress in Uttarakhand. Harish Rawat, a Kumaoni leader, almost lost his chair due to defections from Garhwali leaders within the Congress. It has continued to create problems for the BJP as well,” Ghosh explains.

But the presence of various lobbies within the BJP has reportedly led to a non-stop game of musical chairs in Uttarakhand.

Trivendra Singh Rawat got a fair chance, but he failed the party high command and could not manage the factions, and take the state to greater heights – the 'double engine government' promised during the 2017 polls. 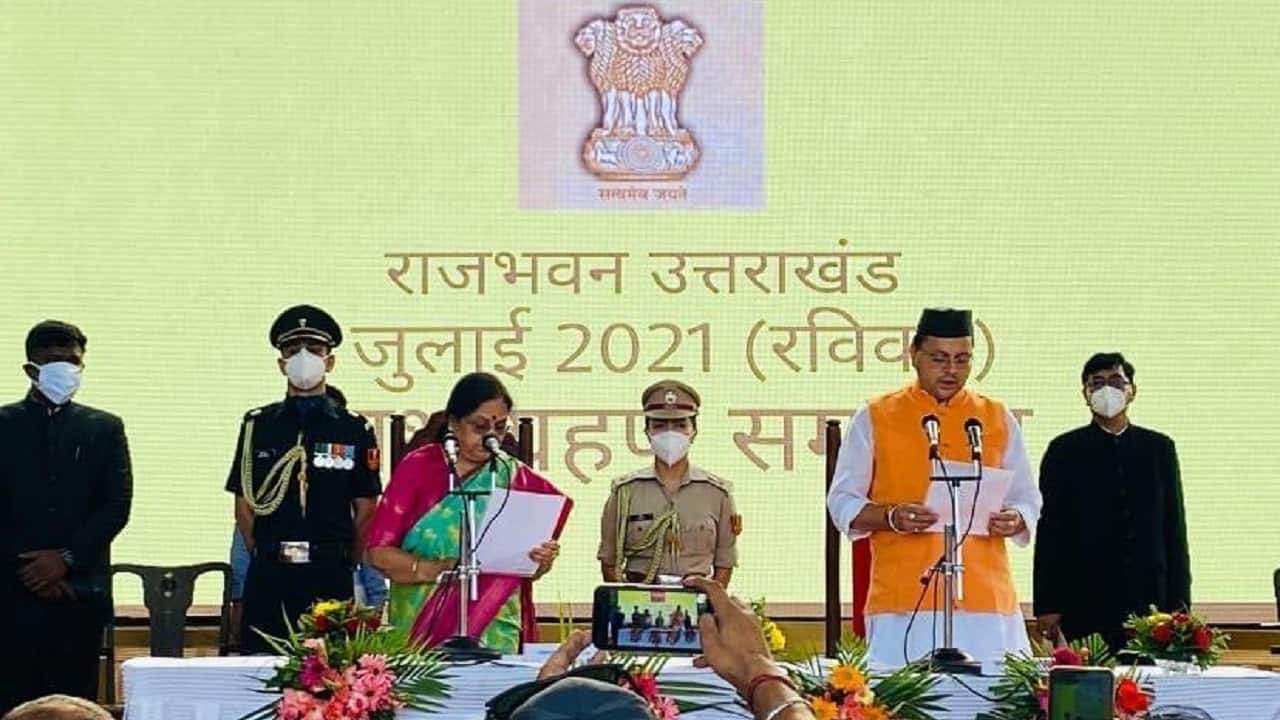 Political timeline of the state

In nearly 21 years of the state's existence, be it the BJP or the Congress, only one — the late Narayan Dutt Tiwari — has had the distinction of completing his five-year tenure.

The BJP, in particular, has the tradition of changing guard in the state every time, close to assembly elections. No surprise then that out of the Uttarakhand’s 11 chief ministers thus far, three have been from the Congress and the rest from the BJP.

Here’s a look at the list of Uttarakhand’s chief ministers so far.

Nityanand Swami of the BJP was sworn-in as the first chief minister of the newly formed Uttarakhand state on November 9, 2000. He served for 354 days, i.e. almost a year.

The BJP formed the first government in Uttarakhand after the state was created and an interim assembly was constituted following the bifurcation of Uttar Pradesh earlier that year.

Swami stayed in power for 11 days short of one year and four months ahead of the first Uttarakhand Assembly election in 2002. He was replaced by BS Koshyari, the present governor of Maharashtra.

Koshyari, a fellow BJP leader, took over the reins from Swami but soon after being sworn-in, lost the 2002 assembly polls. He stayed in office for a total of 122 days before his Congress successor, Narayan Datt Tiwari, took over.

Narayan Dutt Tiwari, who passed away in 2018, led a Congress government that was voted to power in the first assembly election in 2002. His victory managed to break the BJP grip over the state and saw it oust the then incumbent chief minister, BS Koshyari.

The Congress had a slender majority with 36 MLAs in the state assembly; despite that, Tiwari managed to steer his government to a full five-year term.

The late colourful politician served his full term until 2007 but faced challenges from various factions within the party organisation throughout his tenure.

After a complete five-year Congress term, the BJP managed to wrestle back power, appointing BC Khanduri as the next CM, who remained in office for two years and four months. He was replaced by Ramesh Pokhriyal 'Nishank'.

Khanduri launched a massive anti-corruption drive and an austerity campaign, besides announcing a powerful Lokayukta bringing every public authority, including the chief minister, MLAs and senior bureaucrats, under the proposed bill.

He returned to power after Pokhriyal’s resignation. However, in his second term, he held office for 184 days.

BJP brought Khanduri back six months ahead of the 2021 assembly polls. However, the change of leadership could not help it retain power.

The assembly election in 2012 resulted in a hung House with the Congress winning 32 seats and the BJP 31.

With the support of Mayawati's Bahujan Samaj Party, an Uttarakhand Kranti Dal MLA and three Independent legislators, Congress squeezed out a slim victory and appointed Vijay Bahuguna as the sixth chief minister of the state.

Bahuguna — now in the BJP — saw his tenure cut short by the devastating impact of the Uttarakhand floods of 2013. His government was severely criticised for its incompetent handling of rescue operations and the post-disaster rehabilitation and rebuilding processes.

As a result, Bahuguna was forced to resign in January 2014, having held office for a year and 324 days.

On February 1, 2014, Harish Rawat took oath as the chief minister to replace Bahuguna. His government faced a crisis in 2016 during the state Budget presentation.

Nine Congress MLAs led by Rawat himself, rebelled against their own party on the issue of the state Budget.

However, when the bill was ultimately passed, order broke down due to infighting and President’s Rule was imposed for the first time in the young state’s history.

President’s Rule lasted barely for 25 days after which it was quashed by the Uttarakhand High Court and Rawat’s government was reinstated.

President’s Rule, however, returned when the Supreme Court overruled the High Court’s decision and ordered a floor test, which was won by Rawat. He was sworn-in for the third time on May 11, 2016. He would remain the chief minister for 311 days in his third term.

Trivendra Singh Rawat enjoys the distinction of staying in power in Uttarakhand for 3 year and 357 days — just short of four years. This is the longest tenure for a CM in the state, apart from Narayan Dutt Tiwari.

Rawat faced charges of corruption and nepotism, levelled against him not just by the Opposition but also by his own party ranks.

This gained momentum after the Uttarakhand High Court in October 2020 ordered a probe against him in an alleged case of corruption. He was forced to resign because of a 'collective decision' by his party, quitting office on March 10, 2021.

The former state Minister of Education, Tirath Singh Rawat, was sworn-in as the chief minister on March 10 this year.

His term, while lasting a mere 115 days, saw its fair share of controversies. Rawat managed to stay in the news media spotlight, comparing PM Modi to Lord Ram and Krishna, suggested that the United States enslaved India for 200 years, among other things.

Rawat and his Cabinet colleagues collectively resigned on July 2, 2021.

The 11th and incumbent chief minister Pushkar Singh Dhami, was sworn into office on July 4. The BJP leader is the youngest CM in the state's brief and chequered history.

Dhami’s recently constituted 11-member Cabinet promises to rise above people's expectations by delivering on a set of key resolutions. The promises include having a corruption-free government, effective control of the COVID-19 pandemic in the state as well as speedy and transparent services using information technology. 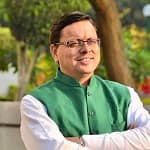 What lies ahead for the new CM?

Since Dhami’s swearing-in, the question on everybody’s mind is whether he can break the curse, get re-elected in the upcoming state polls and complete a five-year term as the chief minister?

“Dhami is a surprise choice, given that Uttarakhand, along with four other states, including Uttar Pradesh, will face elections,” says Ghosh. He believes, however, that Dhami belonging to the Kumaoni community, will act as a balancing factor.

“Despite being a hardcore RSS (Rashtriya Swayamsevak Sangh) worker with good organisational skills, he will face stiff challenges to unify all factions and overcome anti-incumbency, which BJP faces all over India. Probably, BJP is hoping that he will be a rare bridge between PM Modi and Dehradun and will not repeat the mistakes of his predecessors,” says Ghosh, concluding for good measure that “only time will tell whether he will be successful or face the same fate.”