Ola founder Bhavish Aggarwal, who aims to make the Ola FutureFactory in Tamil Nadu the world's largest two-wheeler factory, says Tesla's entry into India will be a "massive positive" for the EV ecosystem.

Every Friday, Ola's founder and CEO Bhavish Aggarwal, spends time at a site that is nearly 2 hours away from the hustle and bustle of his office in Koramangala, a thriving hub for startups in Bengaluru.

The 35-year-old founder of two Indian unicorns - cab aggregator Ola and EV firm Ola Electric, rings in the weekend at a 500-acre site in Krishnagiri, Tamil Nadu, amidst rocky surfaces and sounds of the ground being dug up by JCB trucks. Donning a white hard hat, a lime green vest with Ola emblazoned on it, and construction work boots, Aggarwal walks around the site at a breakneck pace, supervising the construction work and conducting reviews to ensure his ambitious plan is on track.

An aim to make the Ola FutureFactory in Krishnagiri the largest two-wheeler plant in the world, with an annual capacity of 10 million units. The 10 production lines at full capacity are expected to crank out 1 scooter every 2 seconds at full capacity. It is investing Rs 2,400 crore in the plant and will create 10,000 jobs.

In a recent interaction with a group of journalists, a usually media-shy Aggarwal laid out his plans to build EVs across categories such as two-wheelers, four-wheelers, why the scale is crucial for success, and his take on Tesla's entry into India.

"We are building on a 500-acre land the world's largest two-wheeler factory. When it is fully completed next year, it will be 10 million units a year plant. When we finish phase 1 in June this year, it will have a capacity of two million units a year. We will have 15 percent of the world's manufacturing capacity. Everyone is working day and night to make it happen," Aggarwal told Moneycontrol.

When asked about what he is basing the huge demand on, Aggarwal said: "The fact that we have to convert mobility to electric is clear and the only way electric revolution will happen is if you build at scale. This business cannot be disrupted by selling 2,000 vehicles a year. We believe we have an opportunity to put India on the world map. That is the reason why we are building a mega factory.

"The question on how we will find demand- this will happen if we build the right products. Our first product will be a couple of generations ahead of anything built in the market. With products, cost, and scale, you can enable mass adoption," he said.

In terms of per-capita ownership of two-wheelers per 1,000 people, India's numbers hover around 160 compared to Vietnam which has 600. So, India can get to 500-600, Aggarwal added. 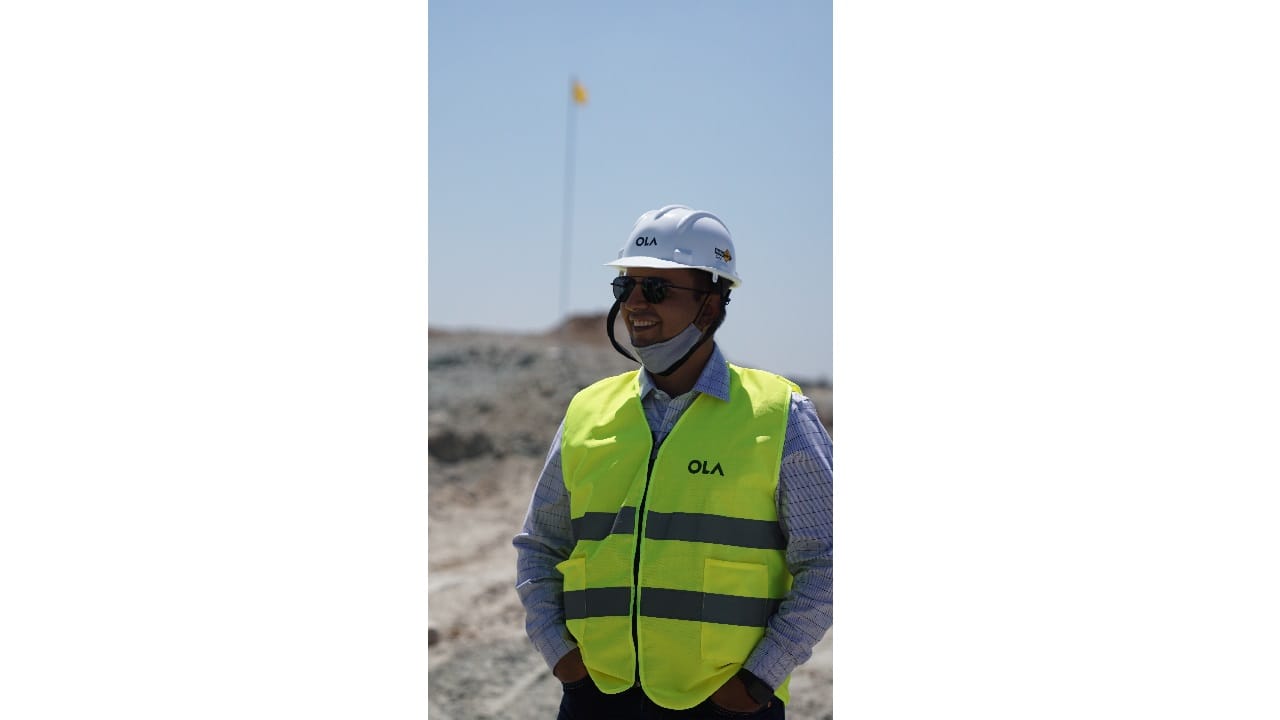 Aggarwal at the 500-acre site in Krishnagiri, Tamil Nadu, where the company is building the world's largest two-wheeler factory.

Ola Electric is betting on what Bhavish calls the "meat of the market"- affordable two-wheelers, three-wheelers, four-wheelers for everyday use, in contrast to luxury sedans and large pick-up trucks, that global players are focussing on. It plans to leverage economies of scale by building a vertically integrated plant powered by technology, where it controls a lot of the core technologies and engineering.

When asked about the apparent contrast between building a cab aggregation platform that aims to eliminate vehicle ownership with a factory that will make 10 million scooters every year, he said people will have different mobility needs.

Ola Electric had acquired Amsterdam-based electric manufacturer Etergo in May last year, with plans to launch two-wheelers globally. It has been running pilots to deploy electric vehicles (EVs) and charging solutions across cities.

While the company did not share details of the mileage or pricing, it said it would be competitive vs peers. While the design bears resemblance to Etergo's AppScooter, the scooter has been reengineered to suit Indian conditions. 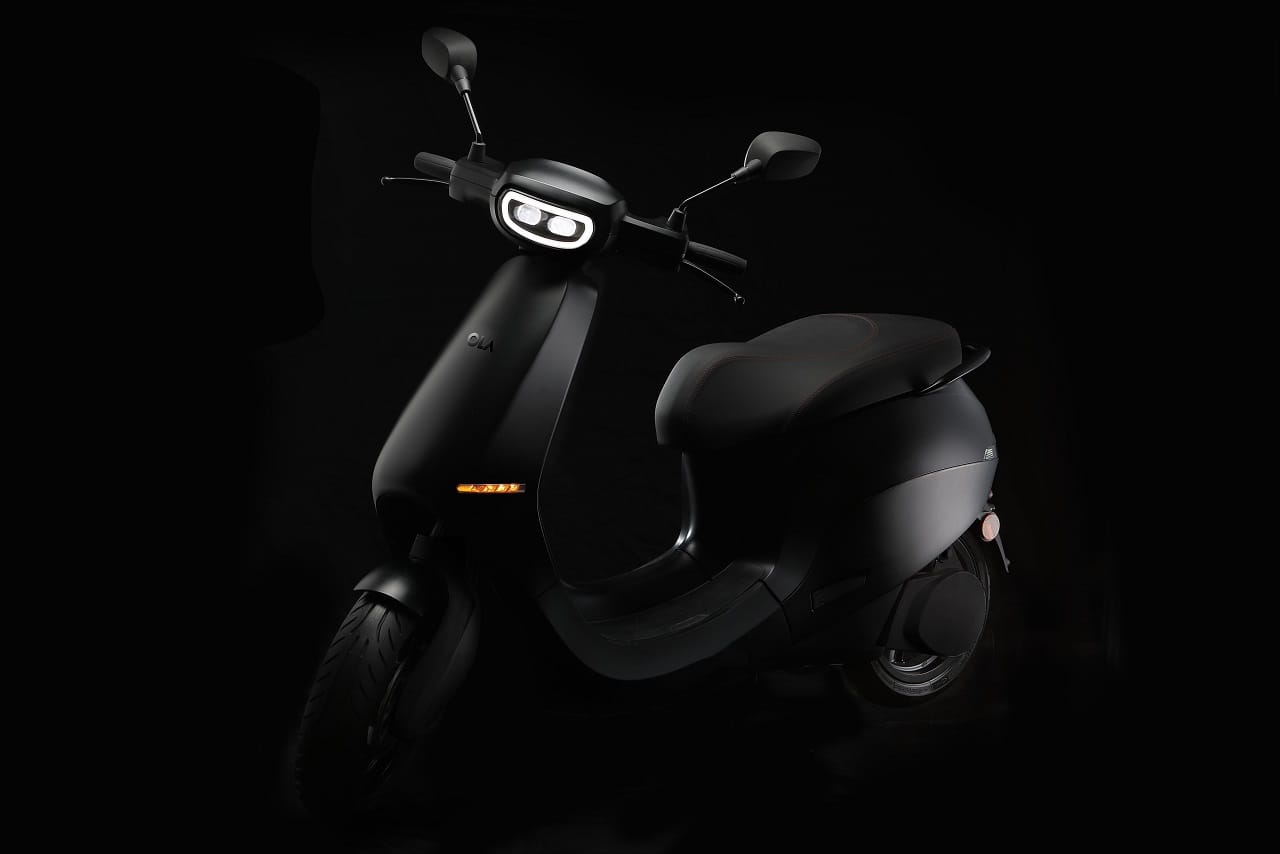 While the design bears resemblance to Etergo's AppScooter, the scooter has been reengineered to suit Indian conditions.

Each scooter will be sold with two battery packs - each pack weighs about 10.5-11 kg, takes an hour to charge and can be plugged in at home. The scooter weighs about 100 kg, requires one battery pack to function, has a boot space that can fit 2 helmets, and has an inbuilt sim card to make calls, play music, and activate safety features.

It expects to roll out the first batch by June. As part of its distribution, Ola is also planning to build a D2C (direct-to-consumer) channel, on top of its cab-hailing app.

When asked about the competitive environment and the entry of Tesla, Aggarwal said, "When an iconic company like Tesla is looking to enter India, it will be a massive positive for the whole ecosystem. It will catalyse it, from demand to suppliers to other automotive companies. It is all the better for companies like us and also for consumers in the end."

Ola's ambitious plan for the EV space comes at a time when its main cab aggregation business is seeing a revival after it was dealt a body blow in the aftermath of the COVID-19 pandemic. "India has been doing well. We are the largest player in India today, present in 200 cities, and have also expanded internationally, to Australia, UK, and New Zealand," he said.
Chandra R Srikanth is Editor- Tech, Startups, and New Economy
Tags: #Bhavish Agarwal #Business #electric vehicles #India #Ola #Ola Electric #Tesla #videos
first published: Mar 7, 2021 07:11 pm