The logistics sector has been in limelight in the past couple of years and is undergoing a significant transformation on account of various reform initiatives and policy changes. The major reforms include the introduction of GST (goods & service tax), roll out of E-Way bill and the sector being granted infrastructure status. The initial benefits of these developments have started coming in but majority would accrue in the coming years. In this backdrop, it may be worth checking out the stock that investors should look at to ride the emerging tailwind in the sector.

Sectoral reforms to drive efficiencies and benefit organised players
The introduction of Goods and Services Tax (GST) in July last year has ushered in an architectural change in the logistics sector and simplified the state-wise differential tax structure with a uniform single lower tax. The new tax regime would also drive operating efficiencies as the time spend to pay octroi duty, border checks could now be used to move goods further.

In November 2017, the government granted infrastructure status to logistics sector (including cold chain and warehousing facilities). The grant of infrastructure status will allow the logistics companies get access to more economical loans under favourable terms. The industry expects to gain around 25-50 bps in terms of funding cost from this development.

The introduction of E-Way bill (electronic documentation aimed to track goods movement and prevent tax evasion under GST) from 1 April 2018 would result in increased transparency as well as encourage further formalisation of the sector.

These changes are likely to reduce the cost of logistics in India which currently stands around 13-14% of GDP, which is significantly higher than countries such as US (9.5%) and Germany (8%). The reforms and developments also marks a step in the right direction as government has already indicated its plans to bring down the logistics cost to around 10% of GDP.

Sector set for a healthy run
In light of the recent developments and changes, the sector looks set to grow at a healthy rate. According to research firm CRISIL, the Indian logistics industry that was estimated at Rs 6.4 trillion in FY17 is forecasted to reach Rs 9.2 trillion by FY20 representing a CAGR of 13% driven by growth across all segments.

Within the logistics segment, Third-Party Logistics (3PL), a service that allows a business to outsource operational logistics from warehousing to delivery, is expected to grow the fastest. As per CRISIL estimates, the 3PL market in India stood at Rs 32,500-33,500 crore in FY17 and is expected to grow at a CAGR of 19-21% to reach Rs 57,000-58,000 crore by FY20. 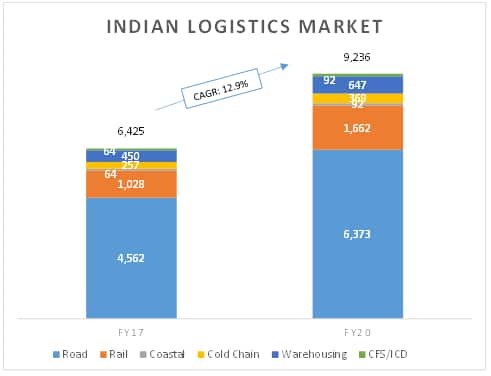 In terms of mode of transportation, road remains the most preferred medium for transport, although it is relatively expensive compared to rail. The growth and efficiencies in road transport (~65% of the sector) will be supported by recent government initiatives such as Bharatmala and Smart Cities.

Growth in E Commerce which requires a faster turnaround time is another key driver for express delivery companies which mainly operate in  the road segment.

Physical warehouses becoming passé
The removal of tax boundaries across states would aid the consolidation of warehouses as logistics companies are increasingly focusing on the hub and spoke model.

They are increasingly employing a pool of large trucks and other vehicles which act as a mobile warehouse to serve a wider area. This trend is gaining traction as it eliminates the need for capital-intensive physical warehouses and allows the players to serve their clientele with more flexible and moving fleet.

However, strategically located warehouses along with specialised warehouses providing customised storage solutions (temperature/climate controlled, Bulk Storage etc.) will continue to flourish as we don’t see any replacement for them.

VRL Logistics has a unique business model and has reported a healthy bottomline growth in 9M FY18.

Allcargo has posted decent performance but its capital intensive business weighs on the Return on Equity (RoE).

Express delivery operators Bluedart and Gati have been witnessing stiff competition from private players, which is the major reason for their sluggish profitability growth during FY14-FY17. Also, their debt to equity ratio remains at elevated levels.

Future Supply Chain (FSC) has seen a big surge in profits (on account of a small base). However, its asset turnover and return ratios remains moderate despite being a third party logistics operator.

The management plans to grow its business organically and has chalked out a capex plan of Rs 400 crore (over 5 years) to drive future growth.

The development of road and highways under the Bharatmala Pariyojana will be a big boost for TCIX as it primarily operates in the road segment.

Despite the hiccups faced due to GST in the Q1 and Q2 of FY18, the company remains on track to deliver topline growth of 18-20% in FY18.

Going forward, we expect the company to post a topline growth of 15%+ in FY19 aided by industry tailwinds.  A slower than expected pick-up in the industrial growth as well as execution challenges related to recent changes (introduction of E-Way bill etc.) remains the key investment risks.

We expect, the net profit growth to be much higher (25 %+) on account of high operating leverage and cost savings resulting from recent changes in its distribution strategy. Investors with a medium to long term view should look to accumulate this stock post the recent correction in the markets.