January auto sales: The New Year started with no fireworks

The auto sector, especially the commercial vehicle (CV) segment, continues to lose steam. There seems to be no respite due to a weak macro environment and a tough regulatory framework.

Auto majors, however, have seen some recovery in passenger vehicles (PVs) and three-wheelers (3Ws).

Pre-buying ahead of BS VI implementation is a big catalyst for the sector. Additionally, higher reservoir levels, adequate soil moisture conditions and expectations of a good Rabi crop are all expected to augur well for tractor and two-wheeler (2W) demand in the next few months.

Factors such as the economic slowdown, the liquidity crunch and non-availability of retail finance have led to a significant decline in demand within the segment. This got further aggravated by the axle load norms, which increased carrying capacity in M&HCVs (medium and heavy commercial vehicles).

However, month-on-month, there has been improvement in demand, which has led to low inventory as well. According to Tata Motors’ management, there has been higher buying interest, especially from fleet owners, which saw the company posting second-highest M&HCV numbers in the past seven months. The management also highlighted that the buying interest in small commercial vehicle segment continues to be better than other segments.

Cars – Not much respite

The car segment did relatively well. The leader, Maruti, posted a volume growth of 4 percent YoY in January 2020. PVs grew 11.2 percent whereas utility vehicles took a hit of 26.6 percent.

The lacklustre demand in this space stems mainly from increase in total cost ownership led by mandatory long-term insurance.  Further, implementation of safety norms has jacked up prices and impacted sales amid weak consumer sentiment.

Market leader Hero saw a sharp volume decline of 13.9 percent. The sales decline for Bajaj Auto and TVS stood at 22.4 percent and 18 percent, respectively. Eicher, the leader of premium bikes, took a knock of 12.6 percent in its January sales numbers.

Three-wheelers (3Ws): All tanked up

The overall 3W market turned out to be an oasis of hope, which posted strong numbers in January 2020. M&M led the race, clocking the highest growth of 35.5 percent. While the sales growth figure for TVS came in at 8.4 percent, Bajaj Auto, the leader in the space, notched up a strong 24.8 percent growth for 3Ws.

Delayed and uneven rainfall distribution have played spoilsport for the tractor segment. However, it has stabilised. Escorts recorded a growth of 1.4 percent and M&M 4.1 percent.  The M&M management expects a positive momentum for tractor demand, driven by the expectations of a good Rabi output and the government’s renewed focus on the rural sector through higher allocations as announced in the Union Budget.

Exports: Some hits, some misses

Export numbers came in mixed for January. While it was a smooth sail for Bajaj Auto, TVS and Maruti, others had to put up with a contraction. 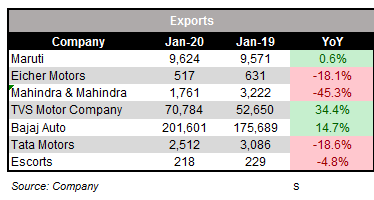