Polycab India's (Polycab) initial public offering (IPO) provides investors with a unique opportunity to be a part of India's largest wire and cable manufacturer. The total issue is pegged at Rs 1,345 crore, which consists of primary as well as secondary sale of shares, valued the company at nearly Rs 8,000 crore at the upper end of its price band of Rs 538 per share. 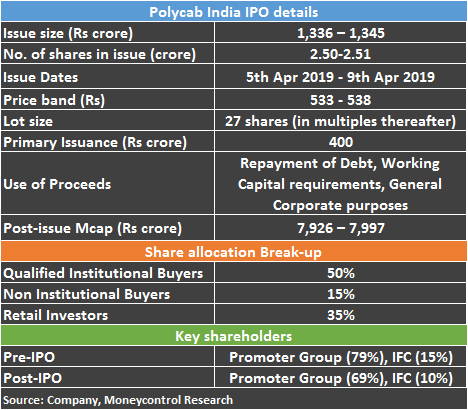 Business background
The company is the largest wire and cable manufacturer in India with an estimated market share of 12 percent. The product suite includes a wide range of offering -- power cables, solar cables, building wires, communication cables and specialty cables -- which find use in a range of industries such as power, petrochemicals, metal and mining, communication and railways.

While cable and wires remains its core business (90 percent of revenues), the company also a small presence in the engineering, procurement & construction (EPC) space through which it provides electrical turnkey solutions to its clients. In 2014, the company forayed into the fast moving electrical goods (FMEG - fans, lighting and luminaire products, switchgears, switches and pumps) segment to leverage its existing brand as well as distribution channel.

The company was established as Sind Electric Stores in 1964 by Thakurdas Jaisinghani and is currently promoted by the second as well as third generation of the Jaisinghani family (promoter group) who together hold around 79 percent stake in the company.

After the IPO, stake of the promoter group will reduce to 69 percent. While the family holds majority stake, the company is professionally managed through key management personnel such as Ramakrishnan Ramamurthi (CEO), Gandharv Tongia (CFO) and Manoj Verma (COO).

What are the key positives?

Dominant position in the market
The domestic wire and cable market is growing 10-12 percent per annum and the current market size is estimated in excess of Rs 52,000 crore. Polycab is the largest player with a double-digit market share. Havells, Finolex and KEI follow with an almost equal share of 5 percent each.

The historic revenue growth of Polycab has been in-line with the industry and the same is expected to continue as the cables and wires market continues to expand on the back of government’s focus on power, infrastructure and housing. The company is also exploring export opportunities through strategic tie-ups in the international markets (US, Europe, Middle East and Africa).

Strong financials and healthy return ratios
The company has a consistent track record and has delivered a topline growth of over 12 percent in the last four years. Earnings growth has outpaced topline on the back of richer product mix and expansion in its operating margin. Leverage remains comfortable at 0.2 times and debt mainly comprises short-term loans for its working capital requirements.

Despite being an asset heavy business model with in-house manufacturing, the company has generated healthy return ratios through prudent working capital management. Its return on capital stood at nearly 20 percent in FY18 and 9M FY19.

Expanding retail presence
While the company has a strong B2B (business to business) focus, its B2C (business to consumer) presence (total 25 percent of revenues) continues to improve with expansion in the FMEG segment. The segment achieved breakeven in FY17 and turned around in FY18 as it generated around Rs 500 crore in revenue with a operating margin of 3.3 percent during last fiscal. While the competitive intensity remains high in this segment, further scale-up of this segment could act as margin lever on the back of operating leverage and pricing power in the retail channel.Integrated manufacturing facilities
Polycab has 24 manufacturing facilities spread across Gujarat, Maharashtra, Uttarakhand, Daman and Diu. The business has a high degree of backward integration (design, manufacturing etc.) which allows the company to control the product quality as well as costs across the value chain.

In 2016, the company entered into an equal joint venture with Trafigura (multinational commodity trading company) to set-up a 225,000 million tonne copper wire rod manufacturing facility in Waghodia (Vadodara). This plant is expected to commence operations from Q1 FY20 and will reduce Polycab’s dependency on copper sourcing from external parties.

What are the key business risks?

Raw material and currency fluctuations
Metals such as copper, aluminium along with PVC compounds and steel form an important constituent of Polycab’s raw material basket. Raw materials are sourced on the basis of average London Metal Exchange (LME) monthly rates. The management follows a pass through mechanism to protect its margin. So, a high degree of fluctuations in prices of these raw materials could affect its profitability over the short to medium term. As the company imports majority of its commodities, depreciation of the domestic currency against foreign currencies has an adverse impact on margin.FMEG scale-up challenging
Polycab’s FMEG business is still in nascent stages and advertising, selling and distribution expenses would continue to remain at elevated levels in the medium term as the company is scaling this segment through aggressive brand development and dealer expansion.

FMEG is a very crowded market with a large number of players present in each product category. Certain products such as lighting have witnessed a steep price erosion due to technology obsolescence and fever pitch competition. Other products such as switchgears and pumps have a high degree of correlation with new construction activity and monsoon, respectively.

The key question - should you subscribe?The issue is primarily an offer for sale with majority of proceeds going to selling shareholders (about Rs 946 crore) and only Rs 400 crore going to the company for retiring working capital debt and other expenses.

As the company is operating at nearly 70 percent capacity utilisation, the timing of the IPO raises questions about the need for tapping funds through capital markets. Valuations are at a minor discount to its core peers (KEI and Finolex Cables) and offers value to prospective shareholders. 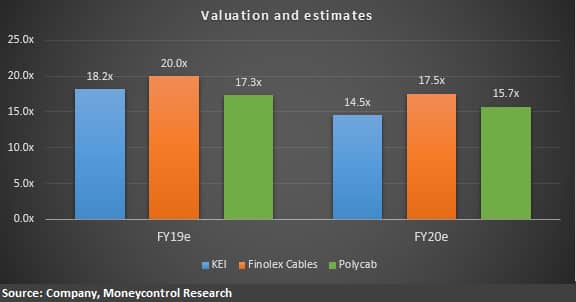 Investors, be it short or long term, should look forward to subscribing to this IPO as its valuation should be at a premium to other listed players considering its market leadership position, sound fundamentals and healthy growth prospects.