Would not be a big seller or buyer in this mkt: Amit Dalal

Amit Dalal, executive director, Tata Investment Corp in an interview to CNBC-TV18’s Kritika Saxena said it is not right time for long-term investors to exit. neither is it the best time to invest. “I would neither be a big seller nor be a big investor right now,” he added.

The house has a preference for private banks over public sector banks (PSUs) because the non performing asset (NPA) problem for the PSU banks according to Dalal could worsen if government regulations impose provisioning for bad debts.

The house is upbeat on ICICI Bank and plans to stay invested in it.

Dalal said: “Next three years would largely be positive for banks unless something goes wrong in the economy and we are stuck with paradigm we don’t have with us.” 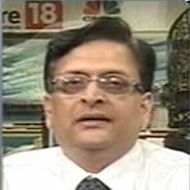 Below is the transcript of Amit Dalal’s interview with Kritika Saxena on CNBC-TV18.

Below is the edited transcript of Amit Dalal & Gopal Srinivasan’s interview with Kritika Saxena on CNBC-TV18.

Q: We are trying to understand how significant has the Budget been or have the new reforms been by the new government as far as picking up investment climate is concerned. When you look at markets right now and when you look at valuations right now, has there been an uptick or is it just the noise that we are hearing about how the government has come in and things are turning around?

A: Our markets since the last year, especially after the election results and the promise of the government to take forward the development process with a very large vision, has been accepted by foreigners and has been fairly appreciated by foreigners and a lot of capital has coming in. There has been a resurge in soft equity markets now for almost 9-10 months. More than anything else, it has been almost secular in its performance.

Also we had 3-5 years of complete dis-interest in equities and individual investors have just faded away while mutual funds and emerging markets (EUM) are falling. So now there is an appetite for equities which was missing for a long time. Even domestically that has helped valuations move up.

Q: Tata Investment Corporation as a whole has been investing largely in equity and the debt market. In the next one year given where valuation stands and given your investment strategy where would the division be largely? Would you now increase perhaps your investment in equity than you did earlier because you have been focused on listed companies but would you increase it now?

A: We had always had a very high equity portfolio and hardly had any debt. In 2011, we chose to invest in a small portion of our corpus in fixed income, almost about 8-9 percent mainly because we felt that interest rates that had gone up very high and there is case to be made for interest rates to come down. That would give a very good current yield and a redemption yield or perhaps a capital gain in the future. So, we are invested largely in debt only because of circumstances but otherwise we are primarily in equity investment company.

A: We believe we have expertise in equities and this company has historically been that equity investor. Continuing to be there, we will take longer and larger calls because the economy now allows us to take more risk with companies and we will perhaps be more aggressive investors in terms of size of companies that we invest in. However, in totality our interest will remain in equities.

Q: How much of an uptick will your investment be in 2015-2016 versus last two years given that there has been some kind of a turn around? When you are looking at increasing investment are there some specific sectors that you will be more aggressive in?

A: The word aggressive perhaps tends to get misunderstood in terms of value. We are a company which does not manage anybody’s money. We manage our own money so our corpus remains the same, except to the extent of appreciation is the direction of corpus we change.

So, if I were to be more defensive in my outlay 3-4 years ago, I am perhaps become more cyclical or more industrial. For instance, we may chose to invest more in finance company which has an infrastructure portfolio larger than a retail portfolio which 3 years ago was not something you would do.

Q: In terms of sectors what are your hot picks and what would be the sectors you stay away from because there very evident sectors that investor across the board are probably staying away from right now?

So, given that if tomorrow someone were to say we are investing in a large airport, it is not that the kind of investment we make. We would invest in a company which is an equipment supplier to that company. So, that is the philosophy with which we invest.

Our sectors are very much like the leading sectors of the market FMCG, IT, pharma and banking remain are largest exposures. I think that mix is what works, and I would like to invest more in midcap infra players but there are very few to choose so.

Q: You are invested in the banking sector quite strongly; you have lenders like ICICI Bank, Corporation Bank, Bank of Baroda (BOB) and Andhra Bank in your list and the gamete of portfolio firms. Given the kind of reforms that the Reserve Bank of India (RBI) has been probably putting in place in the last 1 odd year would you stay invested in banks right now or is this the right time to invest in these companies?

A: Public sector banks have a problem of non performing assets (NPAs). They have a problem which will look worse perhaps as the government's regulations become more imposing in terms of their provisioning of bad debts. However, if you take the largest of banks Union Bank, Bank of Baroda (BOB) which is in our portfolio, the liability side of these banks is very attractive.

In the liability side current account-saving account (CASA) of both private and pubic sector banks in India is very remunerative to their earnings. So we are very positive on the banking sector.

We have yet not seen the gross domestic product (GDP) growth go back to high single digits. That time, banks become very large participants in the economy. As much as you see them suffering when there is a huge trough, when you see the upside, they are a large beneficiary. So, we remain very positive on banks.

Q: Would you say that something like an ICICI Bank for that matter, since it is the largest private sector lender, is it the right time to look at exiting a portfolio like that?

Q: You would stay invested - so what is the cycle that you are looking at for banks in terms of increase in valuations?

A: The next three years should remain positive for banks, largely unless there is something which goes wrong in the economy and we are stuck with a paradigm which we don’t have in front of us. Banks would remain a positive case for next few years.

Q: You would by and large want to stay away from PSUs?

A: Well no, it depends on the banks itself but one has does have to differentiate accordingly.

Q: You have been an investor in NSE for couple of years now. There has been a lot of talk about an IPO, if at all that were to go through would those be interesting routes for you to exit?

A: I am not sure I would exit it just because of IPOs but I would be very happy if it does an IPO. If there is a message I would take this opportunity, where the shareholders, to give NSE please consider listing. I think all investors would like this. There would be tremendous uptick in the valuation of NSE from whatever the current traded prices in the unlisted market because they have done very well for last four years and they are surrogate to equity market performance, straight beneficiaries of improved volume and they are a very well run company, very good corporate governance. I would remain invested for a while, I have no desire to sell.

Q: What about CARE rating because lots of investors are selling right now?

Q: Which is why it isn’t the right time to exit?

Q: What are the preferred routes of exit right now given where valuations are standing in the equity markets and given where sectoral outlook is like keeping the government strategy in mind?

A: If you take an equity investor who wants to take advantage of volatility then you may perhaps exit the stocks in which you have made a lot of money or where valuations are above 30-40 times earnings. However, if you are an investor for a long-term, this is not a good time to divest. It is not perhaps the best time to invest because valuations are rich.  But I would wait for consolidation in this market to go on and I would neither be a big seller but nor be a big investor right now.

India will bounce back once economy opens up, feels Prem Watsa

No govt nod yet, but airlines accept intl bookings

This utility major should be on the radar of investors

Hello, this is... | Ranveer Brar on the restaurant industry amid COVID-19 times