The fourth quarter earnings so far have done nothing to soothe the market. If anything the market is worried about earnings momentum, says Mahantesh Sabarad, deputy VP - Research, SBICap Securities.

If the Reserve Bank lowers rates this policy, it will be the next trigger for the market, he says.

He likes the construction space and is bullish on Ashoka Buildcon and Sadbhav Engineering.

Below is the edited transcript of Mahantesh Sabarad’s interview with Ekta Batra & Anuj Singhal on CNBC-TV18. 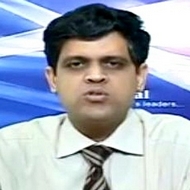 Anuj: It has been extremely volatile, but do you get a sense that the market has made a bottom and is ready to move on or do you think in the month of June, we will get better prices?

A: The market is getting worried about what the earnings momentum right now. We have been discussing this for quite some time. Earnings are just not going so by the time FY15 year ends. Probably we will be flattish to marginal negative when it comes to Nifty earnings or say, Sensex earnings.

Once that event is over, people would like to look at the next trigger which will possibly be in the form of a rate cut from the governor. Until then whether the bottom formation has happened or not is very difficult to call; the market will be volatile in the mean time.

Ekta: Just talking about the rate cut possibility if something comes on this June 2 like a 25 basis point rate cut from the Reserve Bank of India (RBI), hw enthused do you think that the markets would be? What kind of levels could we see on the Nifty just on the basis of that?

A: Largely, the rate cut is being factored by the market, but when the 25 basis point rate cut comes in there will be a sigh of relief in the market. At least the volatility will go away and bottom formation of the market will happen. People will say fine 8,200 Nifty or 8,100 Nifty seems to be a good bottom and get into fundamental stories here in after for the next two years. It will be more of a sigh of a relief on the rate cut that will happen rather than anything else.

Ekta: What about Jubilant Life then?

A: The stock has been doing exceedingly well off late. The results were also quite good. We have an outstanding buying on the stock. Primarily, the company has been doing well because of margin expansion. There has been a surprised margin expansion that we have seen that has taken our earnings trajectory higher. That is one stock that we like right now.