Nifty may touch 9100 by October itself: IL&FS

Speaking to CNBC-TV18 Vibhav Kapoor of IL&FS said that markets are going up and they will keep going up for some more time. â€œLiquidity is gushing everywhere. The US Fed has indicated that even next year, rates won‘t go up. They have reduced their targets.â€

Speaking to CNBC-TV18 Vibhav Kapoor of IL&FS said that markets are going up and they will keep going up for some more time. “Liquidity is gushing everywhere. The US Fed has indicated that even next year, rates won’t go up. They have reduced their targets.”

So, unless the US were to go into a recession, this trend will continue, he said, warning the upcoming US elections are going to be a test.

His target for Nifty in March 2017 was 9100, but he believes the index will touch it by October this year itself, given the liquidity. By March we will still be at 9100, but after that we will go in for a substantial correction of about 10 percent, he said.

He had forecast 12-14 percent earnings growth for this fiscal year. In the upcoming quarter, he expects earnings to be about 5-6 percent. But in the second half with the base effect, there will be a surge in earnings, he said. 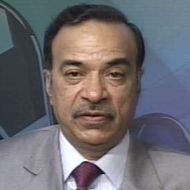 Auto stocks look good, but they are expensive.

Regarding rate cuts, he said the RBI will cut rates, but bond yields will remain where they are.

He is not upbeat on tech and telecom and pharma.

Below is the verbatim transcript of Vibhav Kapoor’s interview to Anuj Singhal, Sonia Shenoy & Latha Venkatesh.

Latha: It has been a liquidity rush on the markets as well. You don't question this momentum, you don't look at the gift horse in the mouth, you just go by?

A: Yes, I think. Whether you go buy or not, I don't know, but definitely market is still going up and probably it will keep going up for some more time because this liquidity is really gushing everywhere and the Fed has, yesterday, indicated that even next year interest rates are not going to go up all that much. So, they have actually reduced their targets from four times to two times or something which means just about half a percent next year. So, unless the US to go into a recession situation this whole thing will continue, but having said that there is a big test coming up which will be the US presidential elections. So, you have another few weeks, maybe four to five weeks for this market to run up and after that you will probably go into a very long and big correction maybe two-three weeks prior to the US elections will take place.

Anuj: You run a large sum of money. So, are you finding new ideas or are you just staying invested where you have invested so far?

A: Yes, we are largely staying invested where we have. It is too late to find new ideas. You may still make money, there is no doubt, as I said maybe if I have another four-five weeks for the market to run up maybe run up another 3-4 percent but the risk to reward ratio may not be all that great now from here onwards.

A: Fortunately we are not very bullish on IT throughout for the last, more than a year, so we didn't have much of an allocation to IT at all. But some churning between sectors in the domestic economy itself, financials, automobiles, cement that little bit of churning obviously one tends to do.

Latha: Those are the pluses for you, automobiles, financials and cement?

Sonia: I remember when we came to your office to do Taking Stock you had indicated to us that it is just a matter of time before 9,100 comes through. Since then the tenure has improved quite a bit for the market. So, do you see higher highs for this market by the end of this year?

A: Yes, our original target was 9100 for March 2017. Obviously with this liquidity and the way things are going probably it is going to get achieved earlier than that. I would only be surprised if it gets achieved somewhere towards the end of October when the market will reach a peak and after that you will have maybe a three month or a four month correction. So, by March you may still be at 9,100 or maybe we have increased the target from 9,100 to 9300 now. So, while 9,100 could come much earlier after that you will go in for a substantial correction.

Anuj: By substantial correction what do you mean?

A: I mean you could easily have something like 8-10 percent correction from there but it depends largely on obviously what the US presidential elections turn out. Of course maybe if Mr Trump wins the reaction could be much larger. If Hillary Clinton wins it could be much smaller. But in any case you are going to get correction.

Latha: What levels when you say correction, is it just 8,500 or thereabouts?

Sonia: Earlier you had indicated to us once that you expect a 15-17 percent earnings growth for this fiscal for FY17. We are in the throes of the earnings season. What do you think could be this earnings season's outcome?

Sonia: So, 12-14 is for this year and for this quarter that comes out?

A: Last quarter was actually almost zero or 2-3 percent. So, it may be about 5-6 percent in this quarter but in the second half where there is a base effect also and things improving - that is the time when you will get that big surge in earnings.

Anuj: Let us talk about some stocks now. Tata Motors, Eicher Motors, the auto consumption stocks or auto stocks. Do you think these stocks will continue to remain part of the leadership too?

A: Yes, auto stocks definitely look pretty good although they are expensive, most of them but the whole market is expensive. So, there is no point in saying that and at such times valuations always tend to be expensive. So, I don't think one should be looking too much into that. So, the auto industry is definitely one which is going to continue to be a leader, both two wheelers as well as four wheelers and particularly passenger cars and that should continue to do well.

Latha: You specifically mentioned that the US Federal Open Market Committee (FOMC) has indicated fewer rate hikes even next year. So, they are pointing to longer term yields, the curve itself flattening. How would you play the yields in India; more power to Non-Banking Financial Company (NBFCs) anything like that. How would you relate to stocks?

A: That is another interesting thing. One reason why I see October is going to be very bullish is I expect the Reserve Bank of India (RBI) to actually cut rates on October 4. So, that should lead to further bullishness in the market. But in the secondary market, the bond market, the 10 year yields have really gone down substantially. So, I don't expect too much of that to happen going forward. So, the RBI will cut but bond yields will probably remain where they are.

Latha: What about the NBFC set of stocks which were the biggest beneficiaries of cheap money?

A: They will continue to do well. They have been leaders in this whole market and lower yields, particularly bond yields are helping them a lot, today with money at lower rates which helps them in maintaining their net interest margin (NIMs) or even increasing them. So, they will continue to do extremely well.

Latha: So, you don't worry about the four times of Bajaj Finserv and Bajaj Finance?

A: Well, some of them yes. They are too expensive, so you have to select the right ones. But there are good companies still available at 2.5-3 times which should do well. Of course if something is eight times, ten times or twelve times I wouldn't go for that.

Sonia: So, the two sectors that the market has not loved as much this year are technology and telecom but the valuations are looking good for many of these heavyweights like Infosys, Bharti etc. Would you touch any of them?

A: Three sectors we were negative on and we continue to be negative or at least underperforming. They are IT, pharma and telecom and I don't think these three sectors are still going to do well. Telecom has still a lot of issues with Reliance coming in competition and the new spectrum and it is too capital intensive. So, I don't think for quite some time you are going to see that sector outperforming.

IT is not going to do well because of global conditions and also because of new technologies, new business environment which is there and pharma is suffering because of the US Food and Drug Administration etc. So, it is best to focus on the domestic sector rather than these sectors.

Anuj: In that what about names like oil marketing companies (OMC) where we have seen big rally and also in the public sector undertaking (PSU) bank basket which would be your top picks?

A: The OMCs are reaching reasonable prices fair value now. So, from here onwards we may not get too much of outperformance. PSU banks, we have not been too bullish on them but things are turning around a bit. Of course stocks have also gone up but if you have a longer term perspective this sector should do well but over 12-24 time frame and not necessarily immediately.